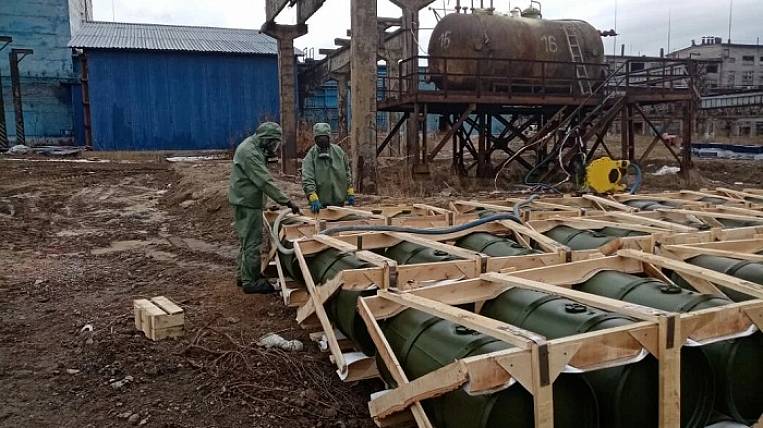 In the Irkutsk region, at the Khimprom industrial site in Usolye-Sibirskoye, all 12 dangerous wells were liquidated. The work was carried out by the Federal State Unitary Enterprise "Federal Ecological Operator", an enterprise of the state corporation "Rosatom".

As EastRussia was told at Rosatom, work on the site began in 2020 and was included in the list of priority measures to liquidate the facilities of the Usolsk Khimprom. Experts have reloaded 17 containers with hazardous substances. An oil lens was also located near the banks of the Angara River.

Now most of the tasks on the territory of "Khimprom" have been completed. The workers installed an anti-seepage curtain and treatment facilities that will prevent oil products from entering the Angara basin. Also, wrote earlier EastRussia, at Usolye, the dismantling of the ground part and foundations of the mercury electrolysis workshop was completed, a special curtain was also installed along the perimeter of the building.

At the same time, work continues on demercurization designs. All objects are recognized as safe for the population. The development of a project for the comprehensive reclamation of the entire site is also being completed.

In 2020, the government planned additionally highlight about 113 million rubles to solve environmental problems in Usolye-Sibirskoye. In October of the same year, the Cabinet of Ministers approved action plan for solving environmental problems in Usolye-Sibirskoye... It includes measures to eliminate environmental damage from the activities of the Usoliekhimprom plant and measures to protect the population from possible exposure to harmful substances during the elimination of damage. It was allocated 430 million rubles... The single contractor was the Rosatom enterprise - the Federal Environmental Operator. He conducts work together with the Ministry of Defense.

After the completion of the work, Rosatom plans to build on this industrial site modern ecotechnopark... It will process the accumulated substances using the technology of physical and chemical processing and demercurization.