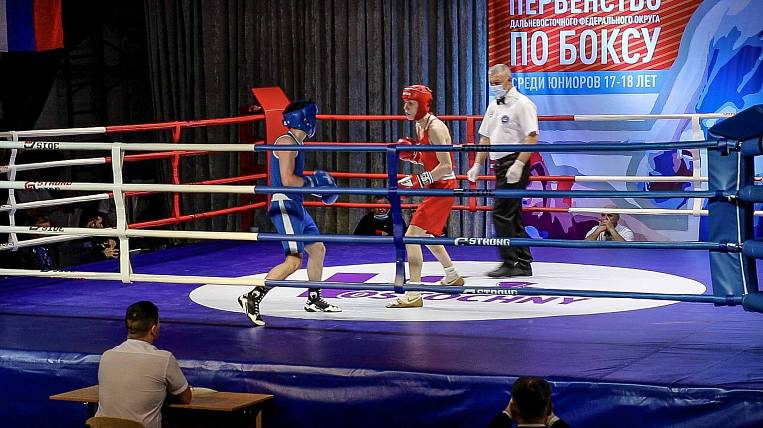 More than a hundred young promising athletes from all over the Far East took part in the fights of the Far Eastern Federal District Championship in boxing among juniors 17-18 years old, which ended last weekend in the Wrangel microdistrict. The competitions, which were held by the Boxing Federation of the Nakhodka Urban District, were held thanks to the support of Vostochny Port JSC and the Vostochny Port Foundation, which implements the Sport social development program in the territory of Wrangel and Nakhodka.

As the president of the Boxing Federation of the Nakhodka urban district Andrei Karpov noted, the fights at the Championship of the Far East were bright, exciting and dramatic.

“I would like to express my gratitude to our general partner - Vostochny Port Joint Stock Company, as well as the Vostochny Port Social and Environmental Initiatives Support Fund. Together we do a lot to popularize boxing in Nakhodka, we try, and as a result, every year the strongest athletes from the regions of Russia and abroad come to our city to compete. I hope that high-ranking competitions will soon cease to be a rare event in the sports life of Nakhodka. We are working on this together with Vostochny Port, "he added.

For four days, the Far East Boxing Championship among juniors was held in the recreation center of the village of Wrangel in a new ring acquired on the eve of the competition by Vostochny Port JSC. Among the representatives of the Primorsky Territory, the victory in the 64 kg weight category was achieved by the pupil of the Dalnegorsk boxing school Yegor Kozorezov, who on his way to the highest step of the podium defeated his rivals with a dry score of 15: 0. Based on the results of the Championship in Wrangel, Yegor will represent Primorye at all-Russian competitions.

Andrey Karpov added that the competition was held at a high level.

“The competition aroused great interest among the Primorye boxing fans, who came to the preliminary, semifinal and final fights, actively supported the guys in the ring,” Karpov said.

Making professional and amateur sports accessible for every resident of Nakhodka is the main task of the Sport program, which is being implemented among 12 social development programs by the Vostochny Port Foundation. With the support of the Fund, sports teams of the Wrangel microdistrict have repeatedly become winners of the highest level competitions. And the names of many local athletes are known far beyond Primorye.