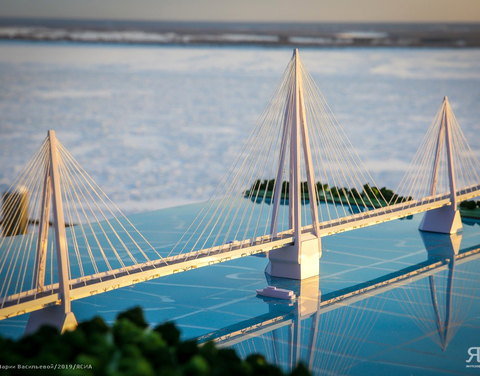 The authorities of Yakutia refute information about the cost of a bridge across the Lena River in the amount of 120 billion rubles. They declare that at the initial stage of construction budget funds will not be needed at all.

Costs at the investment stage of the project are estimated at 83,4 billion rubles. Moreover, private investors will be the first to invest. According to the concession agreement, they should finance the development of design estimates and other expenses in the amount of 29,1 billion rubles.

Construction work is to begin in 2021, and funds in the total amount of 47,9 billion rubles will gradually come from the federal budget. And only by 2025 the republic will send its part - 6,4 billion rubles. They will come in the form of a capital grant from the Road Fund. It, in turn, from 2024, according to the new rules, will be replenished through deductions from excise taxes on oil products. As for the operating costs, for the next 19 years, if we sum them up with investment investments, their amount will be 20,2 billion rubles.

On the eve of the Ministry of Transport announced that in the existing budgetary designs, the money for the construction project of the Lensky bridge not provided. Prime Minister of the Government of Yakutia Vladimir Solodov in an interview EastRussia said that the project has not yet been included in the federal budget, but the financial model has been drawn up so that the investor will carry out design work at his own expense. The concessionaire said that no money from the federal budget would be required at the initial stage of construction. Research will pay the consortium Rostec and the VIS group.