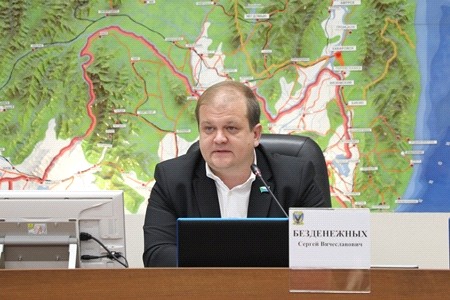 Deputies of the Khabarovsk Territory Legislative Duma proposed making Sergey Bezdenezhnykh a senator in the Federation Council from the region. The parliamentarians adopted this decision at an extraordinary meeting of the standing committee on state structure and local self-government.

Nine of the 11 voters supported the candidacy. Another candidate was Maxim Kukushkin from the Communist Party, but the majority supported the representative of the Liberal Democratic Party, Sergei Bezdenezhnyh. According to the press service of the Zakuma, the deputies will make the final decision at an extraordinary meeting of the regional parliament, which is scheduled for December 4.

At the end of November, the Federation Council ahead of schedule terminated Senator from Khabarovsky Dmitry Pleasantov, who for this position selected in October. The basis was the story with a criminal record under the article “Forgery, production or trafficking of fake documents, state awards, stamps, seals and letterheads”.

Pleasant wrote a statement resignation, and the Central Election Commission of Russia appealed to the Investigative Committee and the prosecutor's office of the Khabarovsk Territory with a request check the actions of the chairman of the regional election commission of Gennady Nakushnov, since data on the criminal record on the website of the Kraiizbirkom were published only after the election.

Degtyarev was asked to transfer the government yacht to children

Russia wants to increase the age of alcohol sales