Molt of the oldest animals is observed in the Primorsky Aquarium 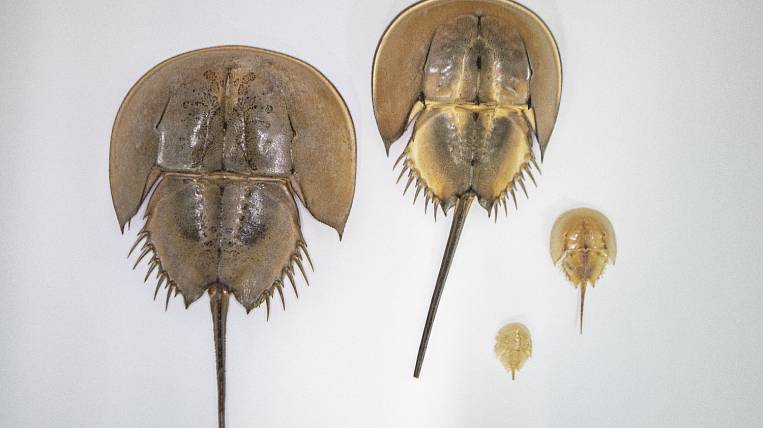 Specialists of the Primorsky Oceanarium are now observing a unique phenomenon - the moult has begun in horseshoe crabs. These ancient arthropods grow out of an old exoskeleton and shed it.

As EastRussia was told in the press service of the oceanarium, some horseshoe crabs have their first molt in captivity, but there are also "veterans" who have dropped their exoskeleton not for the first time. After molting, sometimes horseshoe crabs immediately become one third larger than the discarded shell. At the same time, they shed up to 17 times in a lifetime.

According to Marat Khaidarov, head of the department for the maintenance of tropical aquatic organisms, in order for the molt to go well, the horseshoe crabs need good nutrition. Only in this way will he be able to accumulate enough calcium and minerals to build a new exoskeleton. That is why the food for horseshoe crabs in the aquarium is specially enriched with calcium and other additives.

Most often, molt occurs at night. First, the largest shield - carapace - is peeled off. It covers the cephalothorax. The older the animal, the longer this process takes. Then the animal's tissues are saturated with water, excess pressure arises and the horseshoe crab leaves the old shell. The old carapace on the legs and tail also peels off. The new exoskeleton hardens in just a few hours.

Khaidarov also noted that if the animal had injuries on the skeleton or missing limbs, then during molting, the damage becomes less, and the missing limbs may even grow back. And one of the inhabitants of the aquarium got rid of the nickname after the molt: because of the natural mark in the form of a pirate flag on the shell, he was called a pirate.