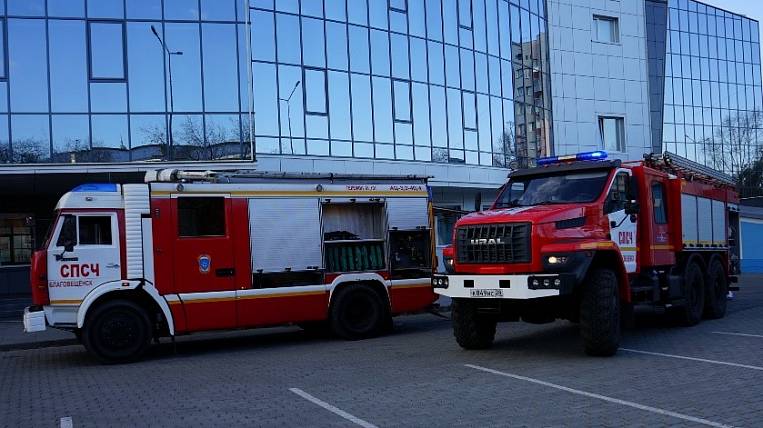 Fire-fighting exercises were held in the administrative building of the DRSK in the Amur region. Together with the specialists of the regional Ministry of Emergency Situations, actions for the evacuation of people were worked out.

As IAA EastRussia was informed in the press service of JSC "DRSK", according to the legend of the exercises, on the first floor of the administrative building of the DRSK in Blagoveshchensk, a coffee machine caught fire, after which the hall began to smoke and the fire spread. The personnel activated the evacuation warning system, after which all employees left the building and gathered in a safe place.

The firefighters who arrived at the scene began to extinguish the fire. They also worked out the ascent to the upper floors of the building using the retractable ladder of the fire engine. The simulated fire was liquidated as soon as possible. Also, the employees of the DRSK successfully worked out the skills of extinguishing the fire using powder fire extinguishers.

As the head of training, deputy chief engineer for reliability, industrial safety and labor protection of JSC "DRSK" Yuri Kolenko said, the company conducts fire drills on a regular basis in all branches.

“It is during the practice of actions in emergency situations that we can find out how smoothly the company's personnel will work, how quickly the calculation for extinguishing the fire will arrive at the place and other points that can only be worked out in practice, so that we are sure that each of the company's employees knows how to act in the event of a real fire, ”he added.

In the opinion of the company's management, the set goals were achieved, the evacuation of personnel from their workplaces was prompt. At the end of the training, we analyzed the comments, all of them will be eliminated in the near future.