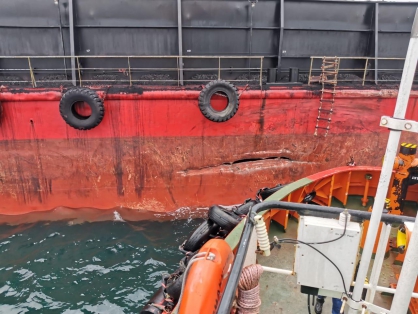 On Sakhalin, in the seaport of Shakhtersk, two ships collided. The damage to one of the shipping companies exceeded one million rubles, in connection with which a criminal case was initiated on violation of traffic safety rules and operation on sea transport.

As EastRussia was told in the Eastern Interregional SU On the Transport of the RF IC, the collision occurred on July 12. On July 11, the Triumph vessel left the port of Sovetskaya Gavan for the port of Shakhtersk. At about 4:00 am the next day, local time, in the Tatar Strait "Triumph" collided with the ship "Reid-11", which was anchored in the port.

The reason for the incident, according to the investigation, was that the crew was not convinced of the safety of the movement, did not conduct visual and auditory observation. The travel speed was also chosen to be unsafe.

The vessel "Raid-11" turned out to have a hole in the dry compartment on the starboard side. The damage to the ship owner exceeded one million rubles. The investigation of the criminal case continues.