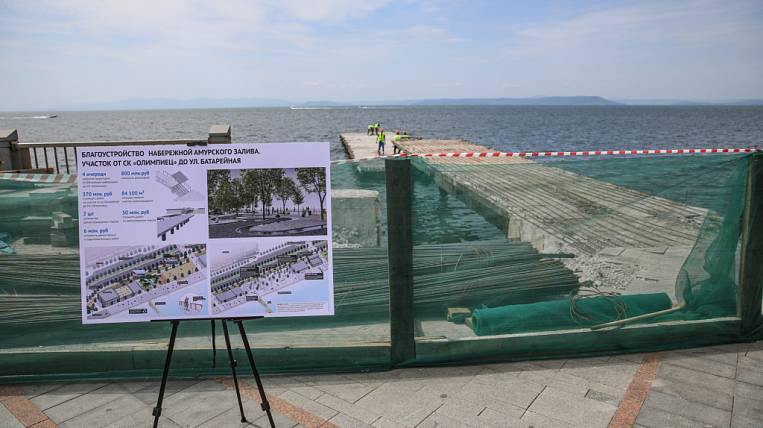 Yuri Trutnev, the plenipotentiary of the President of the Russian Federation in the Far Eastern Federal District, was presented the concept of reconstruction of the Sports Harbor embankment in Vladivostok. The design and estimate documentation has passed the state examination, it is planned to attract business within the framework of the concession agreement - there are already two potential investors.

According to the press service of the Government of the Primorsky Territory, the improvement of the embankment from the sports complex "Olympian" to Batareynaya street provides for four stages of reconstruction.

As noted by the mayor of Vladivostok Konstantin Shestakov, reconstruction has already begun at the expense of a subsidy from the Ministry for the Development of the Russian Far East.

“We will complete the repair of two piers by September. They will become part of the established public space. Further improvement will make the embankment a place for family recreation. The final reconstruction project involves connecting the territory from Cape Kungasny to Tokarevsky lighthouse, ”he said.

Yuri Trutnev, together with the governor of the region, Oleg Kozhemyako, also examined the new fountain on the main square of Vladivostok. The fountain is completely ready, and the asphalting of the square will begin soon. By reducing the parking lot near the Primorye government building, the area of ​​greenery near the fountain will be increased.

As Oleg Kozhemyako noted, preparations for the WEF are underway at other facilities in Vladivostok.

“On the preparation for the Eastern Economic Forum, by order of Yuri Petrovich Trutnev, about 780 million rubles were allocated - this means not only the arrangement of the embankment, piers, but also putting in order the facades of houses on the central streets, repairing roads. Thus, the forum is another opportunity to decorate Vladivostok, to create new comfortable places for recreation for residents and guests of the regional capital, ”Kozhemyako said.

According to Yuri Trutnev, more than 14 billion rubles have already been invested in Primorye through the Far East development program. The improvement work in Vladivostok will not stop after the EEF.

“For the first time, I felt that Vladivostok was changing for the better, becoming more beautiful and more comfortable. And it is not necessary to stop at this, such work should be continued, ”the plenipotentiary said.

EEF-21 will take place on the FEFU campus in Vladivostok on September 2-4. Yuri Trutnev, the plenipotentiary of the President of the Russian Federation in the Far Eastern Federal District, said that the number of participants in the Eastern Economic Forum this year will be almost halved. This will not affect the quality of the event.