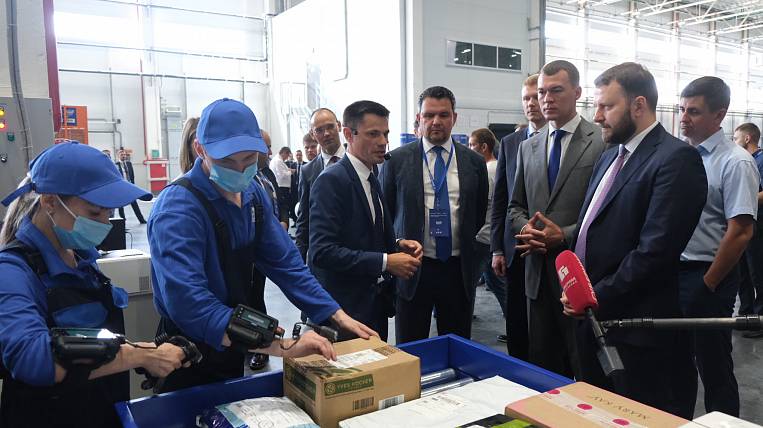 Test launches took place in the new logistics center of the Russian Post and VTB Group in Khabarovsk. LPC is located near the Khabarovsk Novy airport. It will become a key logistics facility in the Far East for processing mail for the Khabarovsk Territory, the Amur Region and the Jewish Autonomous Region.

The project is being implemented by the Russian Post and VTB Infrastructure Holding. Investments in the construction and equipment of the center amounted to 2,3 billion rubles. The terminal is currently undergoing commissioning. The hub will reach its design capacity in the fourth quarter of this year.

The terminal area is more than 21 thousand square meters. meters. It can process up to 300 thousand parcels and letters per day. The fulfillment zone allows you to simultaneously store up to 700 thousand units of goods and pick up to 9,5 thousand orders per day. The terminal building contains areas for sorting parcels, small packages and letters, a warehouse for storing and collecting Internet orders, an air exchange place and an aviation security service area. Almost all processes are automated, and sorting machines operate on the basis of the Russian Post's own software. This improves the quality and accuracy of mail processing and speeds up the delivery of parcels to recipients.

As the Acting Governor of the Khabarovsk Territory Mikhail Degtyarev noted, the main transport routes connecting key points within the country and the most important points in the APR are concentrated in Khabarovsk.

“We were able to implement this project with joint efforts. The regional government helped to connect the center to engineering networks. The opening of the logistics center will increase the quality and accuracy of mail processing, and speed up the delivery of items to recipients. More than 700 new jobs are being created here. The volume of taxes received by the regional budget will increase, ”he added.

“The logistics center in Khabarovsk is the second terminal that we are launching this year together with VTB Group. For us, this is a very important infrastructure project, which in the future will allow us to provide fast delivery to the entire population of the country. When the project is fully completed, we will be able to reduce the delivery time for online orders and letters to major cities of the country to a day, and to regional centers - to three days, ”said Maxim Akimov, General Director of the Russian Post.

“Logistics infrastructure is an important area for the Holding and VTB Group as a whole, and we will continue to invest in this industry, building up a portfolio of projects. The Far East is also a strategically important region for us, where we plan to implement infrastructure projects aimed at the economic development of the region and the country as a whole, ”commented Oleg Pankratov, CEO of VTB Infrastructure Holding.