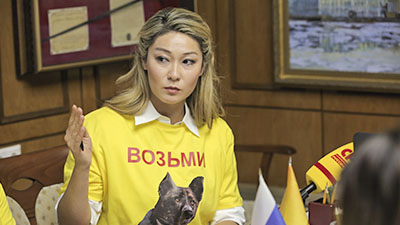 In the elections for the governor of the Khabarovsk Territory, the "Fair Russia" party may nominate the host of "Channel One" Marina Kim against the acting acting head of the region Mikhail Degtyarev. However, experts consider her a technical candidate.

According to "Merchant”, After MGIMO presenter Marina Kim began working on television in 2004, first on the RBK-TV channel, and then on the VGTRK, where she hosted the morning and evening broadcasts of Vesti. Since 2014, she switched to Channel One as the host of the Good Morning entertainment program.

She entered the presidium of the party's central council after the unification of A Just Russia with Patriots of Russia and For Truth. In a political association, she is responsible for information policy.

The presenter herself refused to comment on her possible nomination, and the branch of "Fair Russia" in the Khabarovsk Territory called such discussions premature. Moreover, the head of the regional cell, Igor Glukhov, believes that it will be more of a local figure. The leadership of the central apparatus did not begin to either confirm or deny this information, noting that Marina Kim will lead the territorial group of the party, which will include almost the entire Far East. The number of Far Eastern territorial groups in the party is planned to be seriously reduced and enlarged.

Elections in the Khabarovsk Territory are to be held in September this year. An early vote had to be called after the arrest of the former governor of the region, Sergei Furgal.