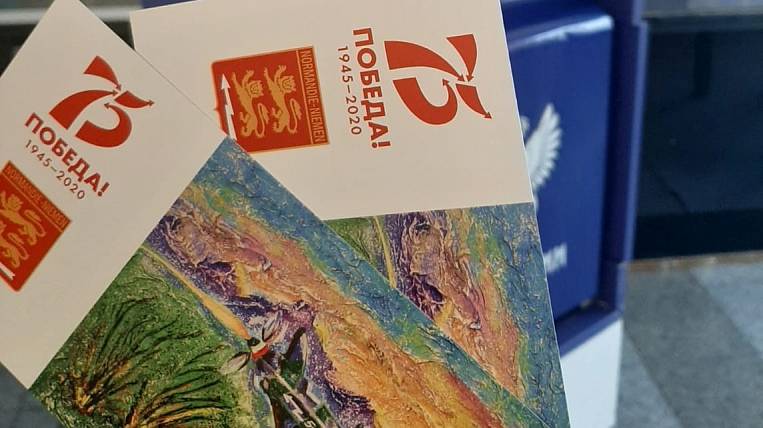 Vladivostok hosted a presentation of a limited edition of postcards "Under one sky" dedicated to the 75th anniversary of the end of World War II and the memory of the legendary Franco-Soviet fighter corps "Normandie-Niemen". Russian Post has provided free postcards sending around the world.

The cards are based on the best works of the regional competition of children's drawings "Under one sky", organized by the non-profit organization "Alliance Française-Vladivostok" and the Primorsky Regional Children's Library in 2020.

According to the director of the Primorsky Regional Children's Library, Elena Kulinok, the work turned out to be unique, because it was a vision of children who touched an unknown history. The competition was organized in order to enhance cultural interaction between Russia and France. The Normandie-Niemen was an aviation regiment of French pilots who fought during World War II against the Axis forces on the Soviet-German front in 1943-1945. The regiment took part in the Battle of Kursk in 1943, the Belarusian operation in 1944, in the battles to defeat the German troops in East Prussia in 1945.

The organizers of the competition personally congratulated the young artists from Vladivostok, Ussuriisk, Pogranichny, Borisovka, Novonikolsk, Sergeevka. All participants of the event received a diploma and a commemorative postcard with an imprint of a special postmark "75 years of Victory in the Great Patriotic War".

At the site where the event was held, a special box was installed, where everyone could put signed postcards. Jury member of the competition Irina Trusova, Associate Professor of the Department of Humanities, Moscow State University. G.I. Nevelskoy, told the guys about postcrossing - the hobby of people from different countries to exchange postcards. Postcards from Vladivostok were sent by post to the address of the French Ambassador to Russia Pierre Levy, the military mission of the French Embassy in Russia, as well as to the French Institute in Moscow and St. Petersburg, to the Museum of Aviation and Space in Le Bourget.

According to Natalia Sakun, director of the Alliance Française-Vladivostok organization, thanks to the Russian Post, it was possible to raise the competition to new heights. It is especially pleasant to see the joyful faces of children, whose drawings adorn postcards. These postcards can be seen at the French Embassy and at the Air and Space Museum in Paris, where messages will be sent.

Another gift for the guests of the event was a philatelic exhibition dedicated to the Victory in the Great Patriotic War. Postcards, envelopes and stamps of different years from the collection of the Russian Post introduced the children to the pages of the history of the feat of Soviet people.