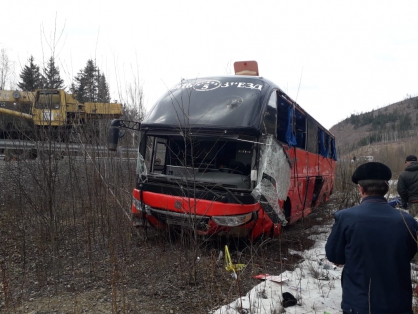 The Khabarovsk carrier company will pay one million rubles to the families of those killed in the bus accident. Victims of road accidents will also receive monetary compensation.

As the Interfax with reference to the director of the company "Five Stars" Yuri Vasiliev, the amount of payments to the victims will depend on the severity of the injuries. According to him, those passengers who were wearing seat belts during the accident were not injured. The accident was caused by the fact that the bus driver fell asleep at the wheel.

The tragedy took place on the night of May 1. There were 32 passengers and two drivers in the bus. At night, near the village of Lidoga, bus drove off the roadway into a ditch and overturned... Three women died, ten people with various injuries were taken to medical facilities. A criminal case has been opened, the main suspect is the bus driver.

Earlier it was reported that those injured in an accident with a passenger bus, which during a night flight followed from Khabarovsk to Sovetskaya Gavan, can apply for a lump sum to the regional administration. The families of the victims will receive one million rubles each. Passengers with minor injuries will receive insurance payments of 200 thousand rubles, and with medium and heavy injuries - 400 thousand rubles.

In Kamchatka, the Internet "fell"