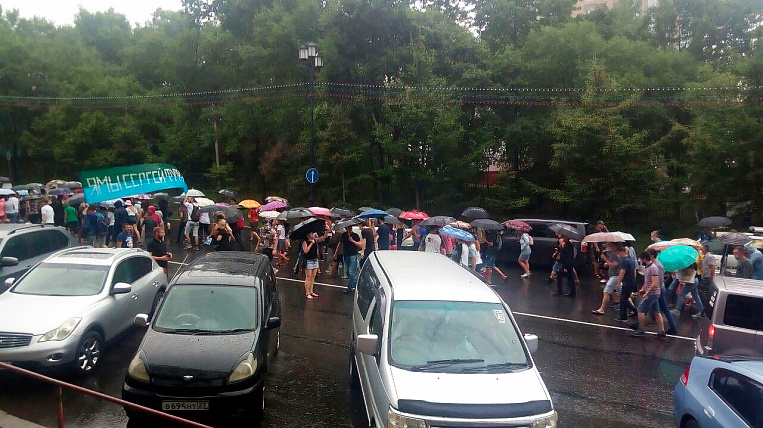 An open hatch was in the way of a column of protesters in Khabarovsk. Unknown persons removed the grate of the storm drain on Pushkin Street.

One of the participants in the procession stumbled and fell with one foot into the open hatch. The man was helped to get out. According to the protesters, this is the third case of open storm drains during rallies in Khabarovsk. The guards of order were informed about the situation, they promised to investigate.

As before, in front of the building of the regional government, the protesters, having returned from the procession through the streets of the city, loudly demand the return of the arrested ex-governor. The slogans "Freedom for political prisoners!", "Putin's resignation" and "Furgal is not a murderer" are heard.

Yesterday, protesters suspected another participant in provocations at a rally in support of Sergei Furgal. The man expressed opinions about the slogans being heard.

On Saturday, August 1, the fourth took place in Khabarovsk mass meeting in support of the arrested Sergei Furgal. According to rough estimates, about 30 thousand people took part in it.

The protesters said that will continue promotions until they get a result... On the evening of July 27, to a column of protesters marching along the central streets of the city, the musician joined and, more recently, journalist Sergei Shnurov. He filmed in Khabarovsk film about rallies in support of Furgal.