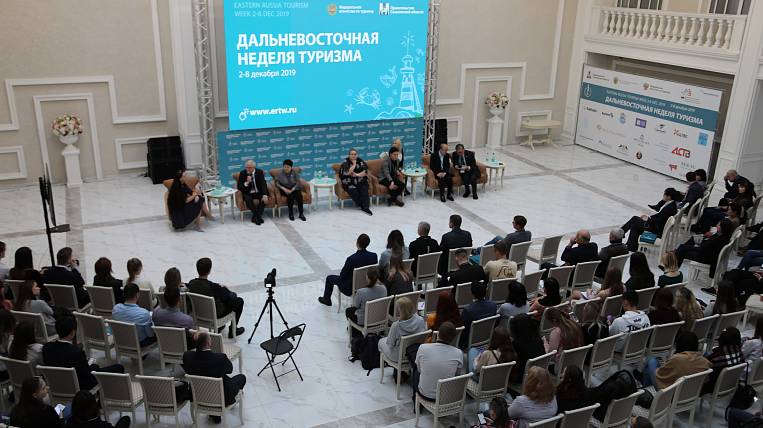 In Yuzhno-Sakhalinsk, events held as part of the Far Eastern Tourism Week have completed. During the week, from 2 to 8 December, at the initiative of the Government of the Sakhalin Region and the Federal Tourism Agency, thematic sessions and field events were held for professionals in the hospitality industry, representatives of foreign business, and the press.

In total, over 400 participants were accredited to the Far Eastern Tourism Week. The Sakhalin business became the most numerous category - 160 people representing travel companies, hotels, restaurants and cafes and other commercial organizations of the hospitality industry signed up for events. Almost 100 people arrived from other regions of Russia, as well as from abroad, to participate in the tourism week.

In total, within the framework of the Far Eastern Tourism Week in Yuzhno-Sakhalinsk, 17 thematic sessions and 3 sessions of a special program for restaurateurs and hoteliers took place. Among the sessions that aroused the greatest interest among the audience were “Investments in the tourism industry: a new window for business diversification”, “Certification of guides and guides”, “Tourism as an incentive for the development of the transport system of the Far East.” Professional workshops of such experts like Victoria Kolitenko, General Director of Equator LLC; Dmitry Kulikov, travel blogger @Oktagon, travel marketing consultant; Tatyana Zarechneva, project manager for Pacific Russia Food.

Within the framework of the Far East Tourism Week, an international study tour for professionals in the tourism industry was held. The leaders of major travel agencies from China, Korea, Japan were able to substantively get acquainted with the existing and promising tour formats on Sakhalin. These participants shared their impressions in the framework of the “country” sessions of December 5, when the national preferences of tourists from Japan, China and Korea were consistently discussed at the main forum venue.

A press tour for federal and foreign media was timed to coincide with the tourism week. Journalists managed to visit the new terminal building, the tourist facilities under construction in the Mountain Air Top, work out a day on Iturup, getting acquainted with how tourism is developing in the Kuril Islands.

Finally, the culmination of the Far Eastern Tourism Week was the organization of a one-day excursion to Iturup for 60 participants. Recall, this is the first time in history when such a large organized group arrives on the island with a tourist purpose, and upon completion of the program it departs without checking into a hotel. The initiator of the tour was the Tourism Agency of the Sakhalin Region.