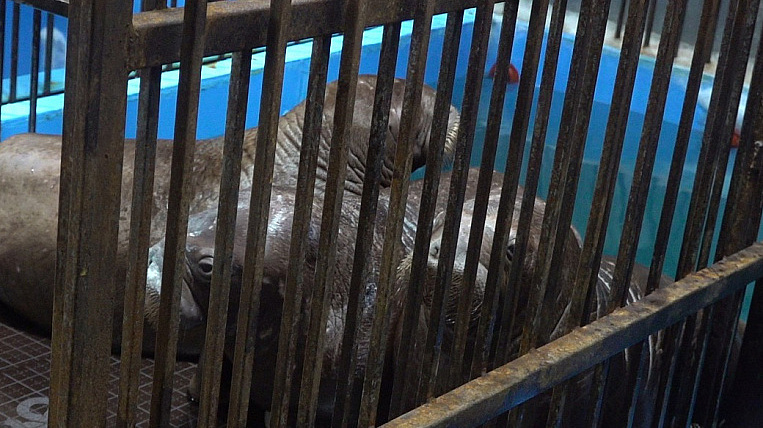 The Arbitration Court of the Novosibirsk Region seized six walruses, who had previously lived in the coastal “whale prison,” and are now in Yalta. The lawsuit was filed by the Amur Basin Environmental Prosecutor's Office.

As noted in the court ruling, he granted the claim for urgent interim measures for the lawsuit against the companies “Aquatoria” and “Aquatoria +” to recover six walruses from illegal possession.

“Of course, there are chances that the walruses will be released. First, they need to carry out a rehabilitation program for them, which has yet to be developed. So far, walruses have not been released from captivity into the wild; there is no such experience in the world. Rehabilitation should be carried out where there are conditions for this, for example, in Primorye, where there is a rehabilitation center "Seal", ready to take on this. And you can release it in Chukotka, ”said Dmitry Lisitsyn, head of Ekaterinakhta Sakhalin, EastRussia.

Earlier, prosecutors confirmed that walruses caught in violation of the law. Allowing documents for the catch provided for the supply of animals to Russian and foreign dolphinariums and oceanariums, and this is not allowed for cultural and educational purposes. Their sale of walruses was also illegal.

Rosprirodnadzor denied Aquatoria LLC permission to export walruses, and the Crimean prosecutor’s office took measures to prevent the possible illegal export of animals outside the country.

The walruses were caught along with killer whales and belugas in the early autumn of 2018. Their kept in a closed iron hangar without windows and light. Read more about the history of walruses in the “whale prison” in Primorye HERE.