Indigenous peoples congress rescheduled in Chukotka due to cornavirus 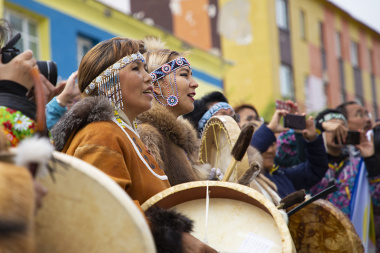 The Sixth Interregional Congress of Indigenous Minorities in Chukotka had to be postponed due to the threat of the spread of coronavirus. 53 delegates were expected to speak.

According to the press service of the government of the Autonomous Okrug, the event was to be held in late March - early April. However, after the restriction on holding mass events was adopted, the congress had to be canceled.

In addition to representatives of non-profit organizations that preserve the culture of indigenous peoples, federal officials were expected to speak at the congress. Now for the participants created a group in one of the popular instant messengers. According to the head of the department for indigenous minorities of Chukotka Elena Evtyukhova, such communication allows you to get to know each other.

In addition, the site will be used for preliminary study of all proposals and projects that will later be submitted to the plenary session. The main issue was to be the socio-economic development associated with the cultural traditions and way of life of the indigenous minorities.

Public events are canceled in all Russian regions in connection with the spread of coronavirus. Experts believe that such measures will help prevent the development of the epidemic. Federal authorities are ready support regionsthat will suffer due to strict quarantine measures.