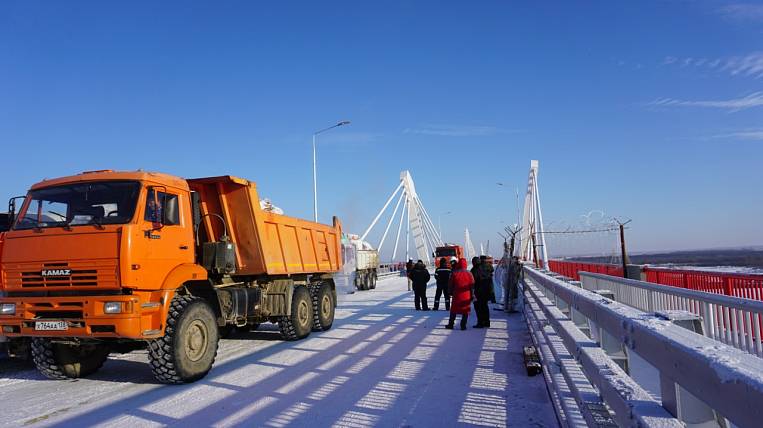 The Blagoveshchensk - Heihe cross-border bridge was first tested to evaluate the carrying capacity under design loads. The tests were conducted by Russian and Chinese experts.

To test the strength of the bridge object, four heavy trucks were selected: a KATO truck crane weighing 40 tons and three KamAZ and ISUZU dump trucks - each weighing about 27,8 tons. According to the press service of the Ministry of Eastern Development, experts checked 14 options for the maximum load on the bridge supports. The most “heavyweight scenario" was 318 tons.

The initial analysis of dynamic and statistical tests showed the correspondence of real load-lifting capabilities stated in the documentation. The work of the supporting structures of the superstructure under the action of test loads fully complies with the theoretical design assumptions of their work, laid down in the project. According to Evgeny Korolkov, the head of the Amur (Heilongjiang) bridge development and construction company branch in Blagoveshchensk, the bridge can be taken into operation under design loads without any restrictions.

The bridge began to be built in 2016, the docking took place on May 31, 2019 - Russian and Chinese builders spun last bolts on both sides of the transition. The main stages of the construction of the Russian part of the transition officially ended in late November. The total length of the bridge is more than one km.

On the Chinese side already built a checkpoint. He will appear on the Russian side, but at first it will be temporary. More than 1,6 billion rubles have already been allocated for the facility; a site has been identified for construction. The movement on the bridge will open in April 2020 years... At the end of 2019, an access road to the bridge was built in Blagoveshchensk. The track of the second technical category was made for the first time in the region.