Mobile first-aid post sent to the east of Kamchatka 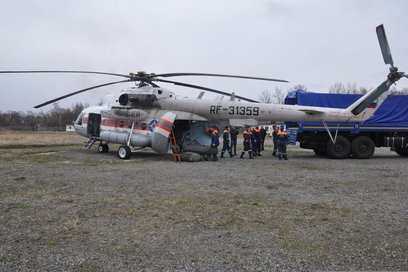 A mobile medical center was sent to the eastern coast of Kamchatka. It is deployed in case of deterioration of the epidemiological situation for coronavirus.

According to the press service of the government of the Kamchatka Territory, such a decision was made at a meeting at the presidential envoy in the Far Eastern Federal District, Yuri Trutnev. Earlier, acting head of the peninsula, Vladimir Solodov asked him to provide assistance for the deployment of a mobile first-aid post for the needs of the Karaginsky and Olyutorsky districts.

According to Sergey Khabarov, acting Minister of Special Programs and Cossacks of the Territory, it will take about three hours to bring the module to full readiness. The module consists of a pneumatic frame inflated by a pumping station. Throughput - 100 people per day. It is supposed to deploy a mobile first-aid post if the number of cases reaches ten. The priority location is the village of Ossora.

In addition to delivering the module, two more flights are planned that will provide the village with medical equipment and regional reserve facilities in case of emergencies. In total, about 6,5 tons of cargo will be transported. In case of deterioration of the epidemiological situation, medical staff and rescuers will be additionally delivered to the eastern coast of Kamchatka.