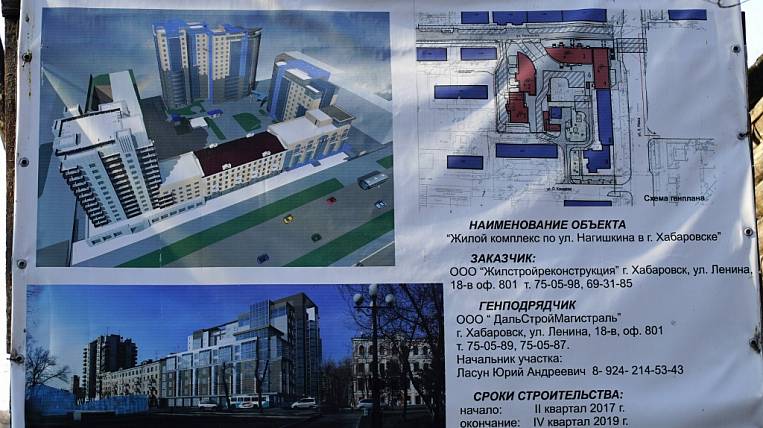 The idle land in the center of Khabarovsk was returned to itself by the city administration. After completing all judicial procedures with a contractor who has not fulfilled his obligations after acquiring land, the site will be put up for auction.

In April 2005, the mayor's office and Zhilstroyrekonstruktsiya LLC entered into a lease of a land plot with an area of ​​almost 7,3 thousand square meters. meters along Nagishkina street. The developer planned to build a residential complex there. After the resettlement of more than two dozen families from the emergency houses located on the site, in the second quarter of 2017, the tenant was supposed to begin construction, but this did not happen.

According to the press service of the city administration, on December 31, 2019, the city hall notified Zhilstroyrekonstruktsiya LLC of the termination of the land lease agreement. A previously issued building permit was canceled. In February of this year, the agreement between the municipality and the company, which could not resettle the dilapidated buildings, ceased to be valid.

In March, the developer, who did not agree with this state of affairs, appealed to the Arbitration Court of the Khabarovsk Territory with a claim to recognize the lease as valid. In late June, the court refused to satisfy the requirements of the builder.

As explained by the head of the department of the city department of architecture and land use, Ivan Stitsky, if the company does not appeal the court decision, it will enter into force within a month. After that, the site will be auctioned. If the appeal does occur, litigation will continue in other courts.

Earlier, the mayor of Khabarovsk, Sergey Kravchuk, instructed the relevant structural units to conduct a global audit of the plots allocated to tenants for capital development. Lands that have not been used for their intended purpose will be returned to the disposal of the regional capital.