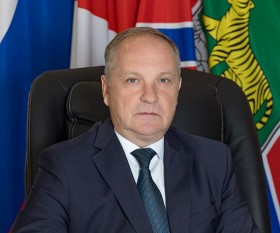 Vladivostok Mayor Oleg Gumenyuk resigns. According to him, this is a consolidated decision of the plenipotentiary of the President of the Russian Federation in the Far Eastern Federal District Yuriy Trutnev, the governor of Primorye Oleg Kozhemyako and his own.

Gumenyuk wrote about this in his post in Instagram... There he added that over the two years of his work in Vladivostok, a lot has been done in the field of improvement, construction and reconstruction of kindergartens and schools.

"The economic activity of any mayor always proceeds against the background of large political processes, which often turn out to be more significant for assessing the work of the head," wrote Oleg Gumenyuk.

The outgoing head of Vladivostok also expressed the hope that the groundwork he has developed will help his successor. He thanked his team and wished the new mayor of the capital of Primorye good luck in achieving results.

Today, during a working visit to Vladivostok, the president's plenipotentiary in the Far Eastern Federal District, Yuri Trutnev, said that the mayor of the city, Oleg Gumenyuk, needs write a letter of resignation... According to him, the city needs a more energetic person who will change the capital of Primorye for the better.

Trutnev noted that a more effective manager is needed in this post. Oleg Kozhemyako's claims were related to work within the framework of a single subsidy for the development of centers of economic growth.

Oleg Gumenyuk took office in December 2018 as acting, and since March 2019, the deputies have approved him in office.