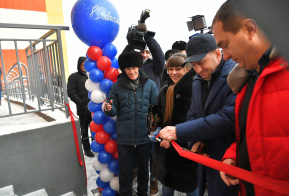 Photo: khabkrai.ru
Khabarovsk orphans began to issue keys in a new building on Aerodromnaya street. The construction was completed in the first half of 2019, however, the paperwork lasted for six months.

According to the press service of the regional government, the contractor had to prove the safety of the location of the house, which is located next to the DOSAAF airfield. So far, only three families have received the keys. The settlement of the rest will begin immediately after the New Year holidays.

The new building has 279 apartments, 69 of which are intended for orphans. In the next six years, the region’s authorities hope to reduce the number of waiting lists due to a new support measure. Graduates of orphanages who are 25 years old will be entitled to social payments for the purchase of housing.