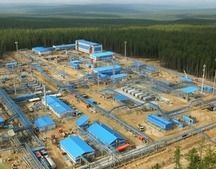 Photo: sakha.gov.ru
The authorities of Yakutia announced the end of quarantine at the Chayandinskoye field, where an outbreak of coronavirus occurred. About 10 thousand people were taken out of 140 thousand shift workers, XNUMX of them were hospitalized in hospitals of the republic.

According to the press service of the regional government, earlier quarantine was lifted from almost the entire field, where 34 shift camps of submarine organizations of Gazprom are located. Restrictions on entry and exit remained only in the area of ​​the hospital and the detention center.

Now about 2,5 thousand shift workers remain in place. The production process is carried out as usual. Quarantine in this territory has been introduced since 17 April, after a spontaneous rally of workers at which they protested against non-compliance with sanitary standards and poor information about the number of patients at the enterprise.

At the field was deployed emergency hospital mobile. Shift workers spent more 1,5 thousand. research on coronavirus. People were taken to the mainland and all those without symptoms of acute respiratory viral infections were sent home to their regions.