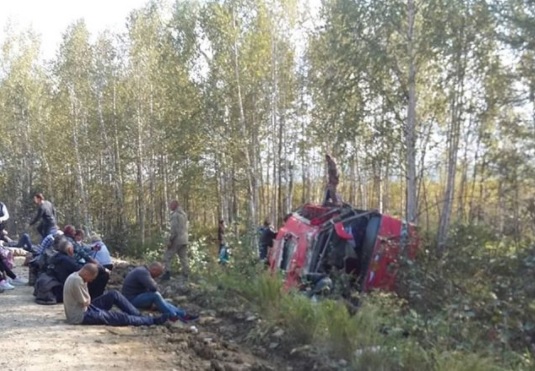 Four more victims of an accident with a passenger bus in the Khabarovsk Territory turned to doctors for help. One man was hospitalized with a concussion.

According to the Ministry of Health of the Khabarovsk Territory, immediately after the accident, the victims were taken by sanitary aviation to the Regional Hospital No. 2. Two patients are in intensive care. Four more men arrived in Khabarovsk yesterday by bus from the Ulch district.

One victim had a concussion and required hospitalization. Another man was not seriously injured, but will be monitored on an outpatient basis. Two more participants in the accident refused to be hospitalized, despite serious injuries.

A passenger bus overturned in the Ulchsky district of the Khabarovsk Territory near the village of Decisive. The salon was 44 passenger... The cause of the accident is the wrong driver's speed. On him a criminal case has been opened.

KAMAZ with fuel overturned on the highway in the Magadan region