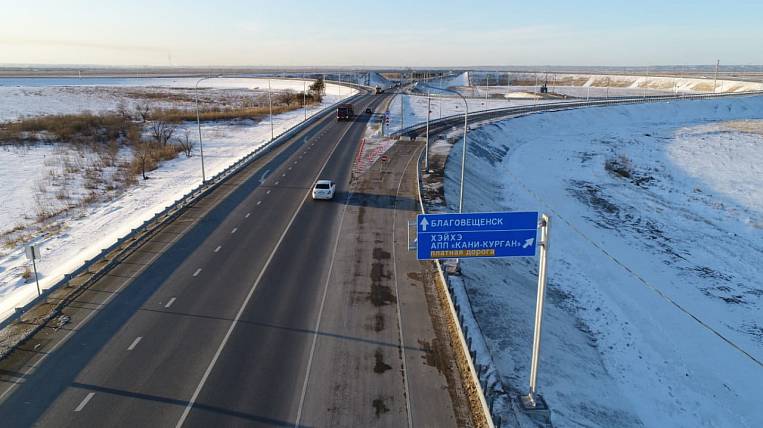 In the Amur Region, the construction of an access road to the cross-border automobile bridge across the Amur Blagoveshchensk-Heihe has been completed. The route of the second technical category in the region was built for the first time.

Contractors performed work around the clock, the facility has already received permission for commissioning. The Gosstroynadzor Regional Inspectorate issued a conclusion on the compliance of the constructed facility with the requirements of project documentation. The passage will be open after the entire bridge with the checkpoint has been completed.

A two-lane road with junctions and exits has been built since December 2016. She has a capital type of coating, reinforced layers of pavement. The track, with a width of 12,5 meters and a length of 14,8 km, is designed for all categories of road transport. In addition to the road itself, the contractor made three viaducts and two structures to connect the disparate territories.

According to Alexander Kozlov, the head of the Ministry for the Development of the Russian Far East, about 14 km of the road were laid from scratch, in the place where there used to be a field and forest plantations. According to the minister, all work at the facility was completed in full in accordance with the calendar schedule of the contract.

The bridge began to be built in 2016, and they planned to dock in March this year, but the deadlines had to move. The long-awaited docking took place on May 31 - Russian and Chinese builders spun last bolts on both sides of the transition. The main stages of the construction of the Russian part of the transition officially ended in late November. The total length of the bridge is more than one km.

On the Chinese side already built a checkpoint. He will appear on the Russian side, but at first it will be temporary. More than 1,6 billion rubles have already been allocated for the facility; a site has been identified for construction. The movement on the bridge will open in April 2020 years. It is estimated that the crossing capacity will be 630 trucks, 164 buses, 68 cars and about 5,5 thousand people per day.