Children's art schools in Sakhalin will receive 21 million for equipment 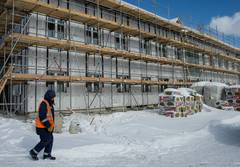 Photo: sakhalin.gov.ru
In the Sakhalin Oblast, they intend to spend 21 million rubles to equip children's art schools. The funds will be allocated from the local budget and will be used to purchase musical instruments, new equipment and educational literature for three institutions.

According to the press service of the governor, federal money will be added to local money. Through the national project "Culture" eight billion rubles have been allocated for all art schools in the country, some of which will go to Sakhalin. In his message to the Federal Assembly, Russian President Vladimir Putin noted that such institutions are often located in dilapidated buildings and instructed the government to help the regions put them in order.

Last year, eight art schools were equipped on the island as part of a national project. 29 million rubles were spent, of which 12 million were federal. 180 new musical instruments, 1082 pieces of equipment and more than 1500 teaching materials were acquired. In 2021, the amount of funds will increase to 33 million rubles. In addition, in the next three years, the authorities intend to overhaul the three buildings of the Children's Art School.