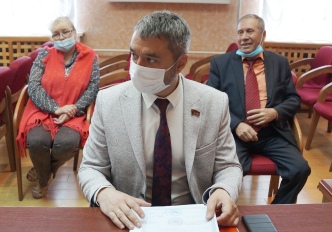 Photo: jewish_aut.izbirkom.ru
Maxim Kukushkin, a deputy of the Zakuma of the Khabarovsk Territory, submitted documents for registration as a candidate for election of the governor of the Jewish Autonomy. He was put forward by the regional branch of the Communist Party.

Kukushkin announced his participation in the elections for the head of the Jewish Autonomous Region back in February. He was able to become a full-fledged candidate after holding a party election conference. At the same time, earlier the Communist Party of the Russian Federation nominated a pensioner from the village of Razdolnoye, Alexander Krupsky.

For the opportunity to vote seven more people will compete. Acting as the head of the region, Rostislav Goldstein, will go from United Russia. Also, the Greens and the Growth Party have nominated their candidates.

Also among the candidates are residents of other regions: Boris Tikhonov from Primorye, who was nominated by the Rodina party, Roman Kuzemsky from Chita from Patriots of Russia, and an entrepreneur from Samara from the Democratic Party of Russia.