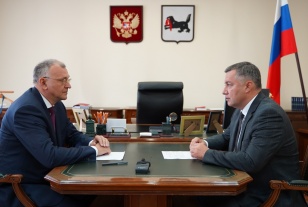 According to the press service of the Priangarye government, his responsibilities will include coordinating the work of the Ministries of Forestry and Sports. Bunev took up his duties today, August 10.

According to the Acting Governor of the region Igor Kobzev, he will have to carry out difficult work to prevent forest fires and reduce illegal logging. Priority for Bunev, Kobzev called the preparation for the World Bandy Championship.

High alert introduced due to floods in Irkutsk