EastRussia Bulletin: the funds of the National Welfare Fund can be used to modernize the Far Eastern energy sector 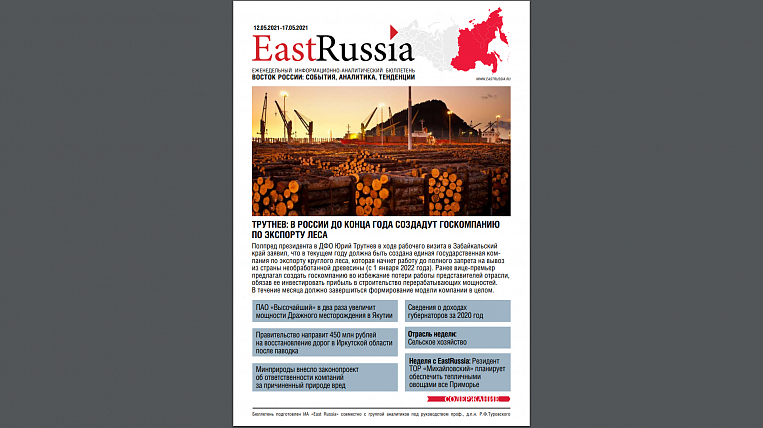 Deputy Prime Minister A. Novak said that the funds of the National Welfare Fund (NWF) can be used to modernize the Far Eastern thermal power plants. The government is considering the possibility of providing funding from the NWF for the implementation of three projects of PJSC RusHydro in the Far Eastern Federal District, according to the current issue of the EastRussia bulletin

Coal-fired power units at the Neryungrinskaya SDPP are expected to be built by 2025 to supply power to the Eastern range of Russian Railways, their cost is estimated at 100,61 billion rubles. Gas power units at Artyomovskaya CHPP-2 and Khabarovskaya CHPP-4 are to be built by 2026 as part of the modernization program for old TPPs. The cost of building these power facilities will amount to 72,9 billion rubles and 52,4 billion rubles, respectively. Up to 25% of the cost of each object can be financed from the NWF funds - the total amount of funds received from the fund will amount to 56,5 billion rubles. After the power units are commissioned, the investor will have to return the fund's funds at a rate of 4-5% (within 15 years). For 75% RusHydro should attract its own financing.

In particular, it is planned to finance partly through a premium for the first and second price zones of the wholesale energy market (the European part of the country, the Urals, Siberia), and partly through a premium for consumers in the non-price zone in the Far East. Attraction of funds from the NWF is also designed to reduce the tariff burden on end consumers of the wholesale market. According to preliminary estimates, this can save consumers about 5,2 billion rubles in annual payments for capacity. In this case, the total volume of capacity for these facilities is estimated at 39,4 billion rubles (while without using the funds of the NWF - 44,5 billion rubles a year). Payback is expected to be achieved through a scheme similar to capacity supply contracts (CSA), which guarantees a return on investment through increased capacity payments. The basic profitability of these projects may amount to 12,5%.

In addition, RusHydro applied for the modernization of the Vladivostokskaya TPP-2, the construction of the second stage of the Yakutskaya TPP-2 and the expansion of the Partizanskaya TPP. These objects did not pass the selection according to the cost criterion, since the volume of investments in projects that claim funds from the NWF must be at least 50 billion rubles.

Secondly, the Far Eastern Distribution Grid Company (DRSK, RusHydro Group) put into operation the 35/6 kV Ulyanovskaya substation in the town of Artem, Primorsky Krai. In addition to the substation, a 35 kV line was built and connected to the existing 35 kV power transmission line. The commissioning of a new power center makes it possible to redistribute the load of existing consumers in the central part of Artyom and provide additional capacities for housing construction (no large substations have been built in the city over the past ten years). The project provides for the possibility of further expansion of the substation with the installation of an additional transformer. In Artem, DRSK is also reconstructing the 110 kV Zapadnaya substation, where an additional 63 MVA power transformer is being installed. The first stage of work is planned to be completed this year.