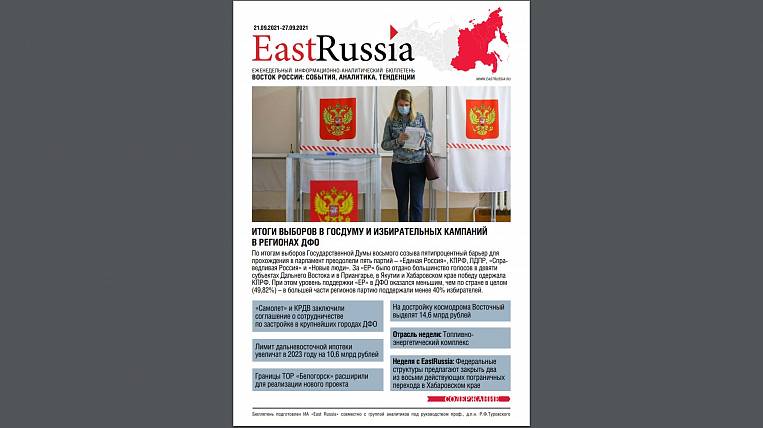 A detailed analysis of the results of the elections to the State Duma and election campaigns at the regional level is given in the current issue of the EastRussia bulletin.

As a result of the elections of deputies to the State Duma of the eighth convocation in several single-mandate constituencies in the Far East, candidates supported by the regional authorities failed to win. In conditions of limited competition, Acting Governor Mikhail Degtyarev won the election for the head of the Khabarovsk Territory. In a number of Far Eastern subjects, regional parliamentary elections were held - United Russia retained its dominance, but in most regions the level of party support was lower than in 2016. Nevertheless, the party's candidates won in most single-mandate constituencies. At the same time, the positions of the Communist Party of the Russian Federation have improved. On the contrary, the LDPR showed a low result in comparison with the previous convocations, which is typical for the country as a whole.

According to the results of the elections to the State Duma of the eighth convocation, five parties overcame the five percent barrier for entry into parliament - United Russia, the Communist Party of the Russian Federation, the Liberal Democratic Party, A Just Russia and New People. The majority of votes were cast for "United Russia" in nine constituent entities of the Far East and in the Angara region, but the Communist Party of the Russian Federation won in two Far Eastern regions - in Yakutia and the Khabarovsk Territory.

At the same time, the level of support for "United Russia" in the Far Eastern Federal District turned out to be lower than in the country as a whole (49,82%) - in most regions, the party was supported by less than 40% of voters. The exceptions were Buryatia (42,63%), Chukotka Autonomous Okrug (46,71%), Magadan Region (50,08%) and Jewish Autonomous Region (56,39%). Compared to 2016, the party improved its result in the Jewish Autonomous Region and the Magadan Region, but in other regions it received a smaller number of votes than in 2016.

On the contrary, the position of the Communist Party of the Russian Federation, which managed to attract the votes of the protest electorate, significantly strengthened - the party's result improved (compared to 2016) in all Far Eastern regions, and with an all-Russian result of 18,93% in almost all subjects of the Far Eastern Federal District, the party received more than 20% (in seven regions - more than 25%). Among the parties of the parliamentary opposition, the positions of the LDPR have significantly weakened, which is a common tendency for the country. Only in five Far Eastern regions the level of party support exceeded 10% (Zabaikalsky, Khabarovsk and Kamchatka territories, Amur Region and Chukotka Autonomous Okrug), but even in this case it was inferior to the result of 2016.

The SRHP, which uses a social agenda and claims to be part of the electorate of the Communist Party of the Russian Federation, managed to improve the result in the Irkutsk region, the Trans-Baikal, Primorsky, Khabarovsk and Kamchatka regions, the Amur and Sakhalin regions and the Chukotka Autonomous Okrug. As for the new party "New People", it received the highest support in the Far East in Buryatia (11,22%) and in Yakutia (9,87%). It should be recalled that the top three of the federal list of "New People" included the ex-mayor of Yakutsk Sardana Avksentieva (who is an adviser to party leader Alexei Nechaev), who campaigned in these regions.

The turnout in the regions of the Far Eastern Federal District and Irkutsk Oblast was lower than the national average (with the exception of the Jewish Autonomous Okrug and Chukotka Autonomous Okrug). The lowest turnout was recorded in the Irkutsk Region (36,99%) and the Trans-Baikal Territory (39,35%).