News February 17 2020
22:14 Russian woman became infected with a coronavirus on board a cruise ship
The Republic of Sakha (Yakutia) 16:05 Cost of living increased in Yakutia
Primorsky Krai 14:47 On the lands of the Ministry of Defense in Primorye will build social housing


Khabarovsk Krai 13:38 The epidemic threshold for colds exceeded in the Khabarovsk Territory
Primorsky Krai 13:06 New garbage collection equipment will be purchased in Primorye
Sakhalin Region 12:09 They want to fix the cost of square meter on Sakhalin
Chukotka 10:34 Cruise liners want to take in Chukotka
Irkutsk Region 10:21 Children's medical center will be built in Angara


Kamchatka 09:19 In Kamchatka, looking for a contractor for the construction of the airport
Magadan region 08:34 Gold mining volumes increase in Kolyma
Khabarovsk Krai 07:50 Residents of Khabarovsk Territory promised unusually warm weather
Amur Region 07:41 More than 2 billion rubles will receive families with children in the Amur region
07:19 A new method of theft of personal data is distributed in Russia

A bus accident in Transbaikalia claimed the lives of two children 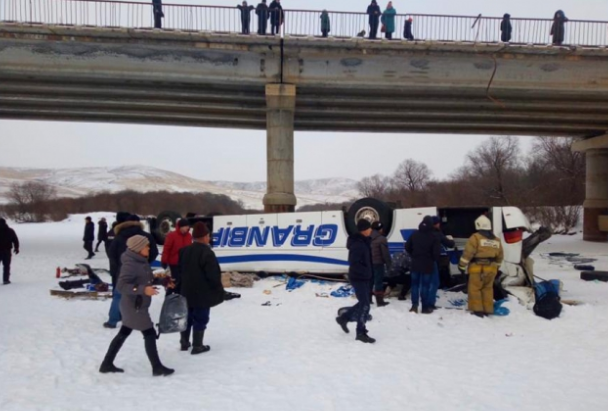 Among the passengers of the bus, which fell off the bridge in the Trans-Baikal Territory, there were two children of preschool age. They and 17 adults, including the driver of the vehicle, died at the scene of the accident, 19 people were hospitalized.

According to the press service of the Ministry of Health of the Russian Federation, those injured by helicopter were taken to hospitals in the cities of Shilka, Nerchinsk and Sretensk. Several people are in serious condition. It was decided not to transport them to federal medical centers. Leading specialists of the country advise Trans-Baikal doctors regarding patient management.

The tragedy occurred at about three in the afternoon of December 1. The bus that drove passengers from Chita to Sretensk fell from the bridge over the Kuenga River and landed on the roof. According to information RIA News, the front wheel burst at the car, after which the driver was no longer able to cope with the control. He did not reach the destination only 60 km.

The Investigative Committee of Russia reports that a criminal case has been initiated under the provision of services that do not meet safety requirements, which resulted in the death of two or more persons. The investigation is under control in the central office. Forensic experts continue to work at the scene of the accident.

A Chinese-born coronavirus family was discharged in Transbaikalia

Deputy Minister in Transbaikalia suspected of receiving a bribe

Indian investor wants to build a hospital in Chita