Fat of the Earth: mud volcanoes of Sakhalin

Same as magmatic volcanoes, but hundreds of times smaller; erupt, but without lava and volcanic bombs; for the most part do not threaten people, but they themselves need protection. On Sakhalin Island you can see how the experimental "dishes" gurgling in the kitchen of Mother Nature, among which mud volcanoes. They are frequent satellites of gas and oil fields and one of the region's brands. Eruptions of mud volcanoes on the island occur regularly. 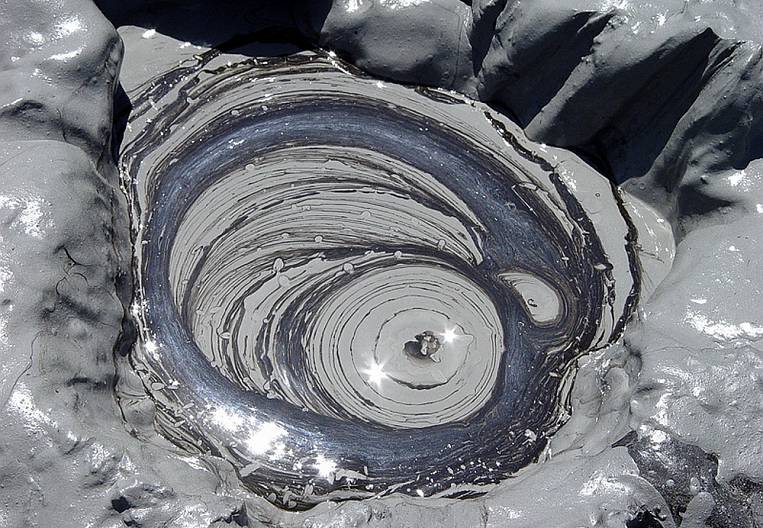 Photo: boomerangclub.ru
Mud volcanoes are “must see” sightseeing tours around the island, they are in the catalog of all local travel agencies. Scientists name 4 locations: the Yuzhno-Sakhalinsky mud volcano in the south, the Pugachevskaya group and Lesnovsky in the southeast of the island, in the same direction, not far from the hot springs - Daginsky. Lesnovsky (in the Korsakovsky district) looks like a trivial puddle in the forest, so the guides take guests only to the first three. In Russia, mud volcanoes are also known on the Taman and Kerch peninsulas (more than 320 formations). Geothermal mud in Kamchatka is similar in appearance to the griffins (salses) of mud volcanoes, but differ in the reasons for the origin and composition of the substance carried to the surface.

A mud volcano is a geological formation in the form of a hole on the surface of the earth (salza) or a cone with a crater (griffin, mud hill), makaluba, from which mud masses and hydrocarbon gases, usually methane, often accompanied by water and oil, erupt constantly or from time to time. (By comparison, asphalt volcanoes spew gas, oil, and tar.) Formation waters soften the clay and carry it out together with fragments of hard bedrock. At the site of mud eruptions, beautiful crystals of pyrite, sulfuric and iron ore are found. The "treasures" are especially noticeable in sunny weather. According to one of the versions, mud volcanoes are the residual phase of decay of magmatic volcanoes, the same phenomenon as fumaroles, baths or geysers. On the other hand, mud volcanoes are caused by processes taking place in the sedimentary layer of the Earth (i.e. at much shallower depths, compared to the first version) and are associated with the formation of hydrocarbons from organic matter contained in sedimentary deposits. 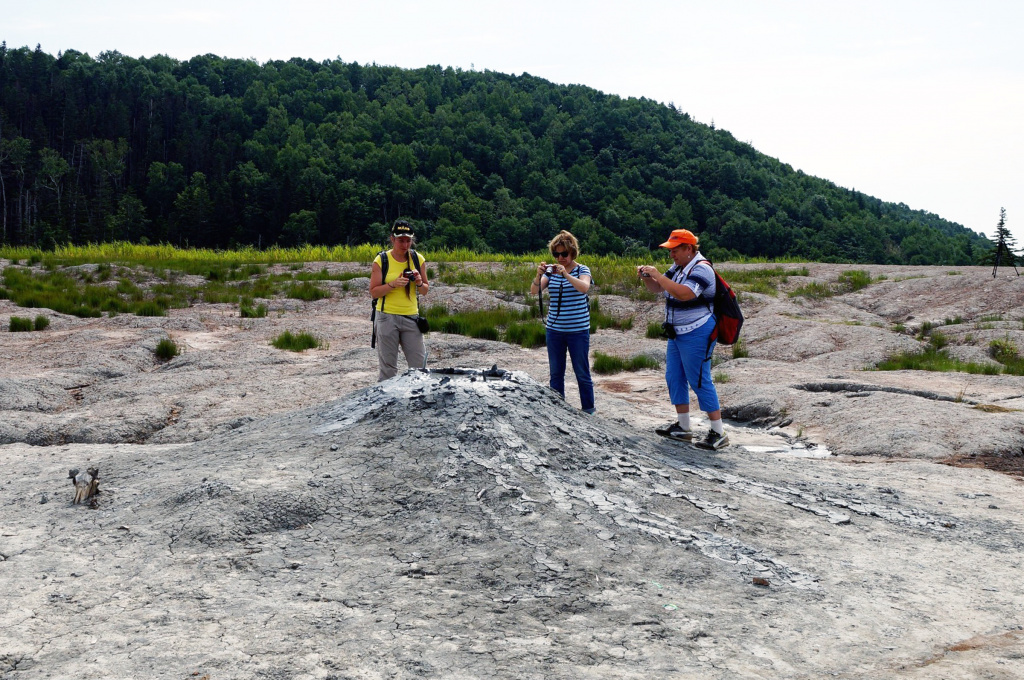 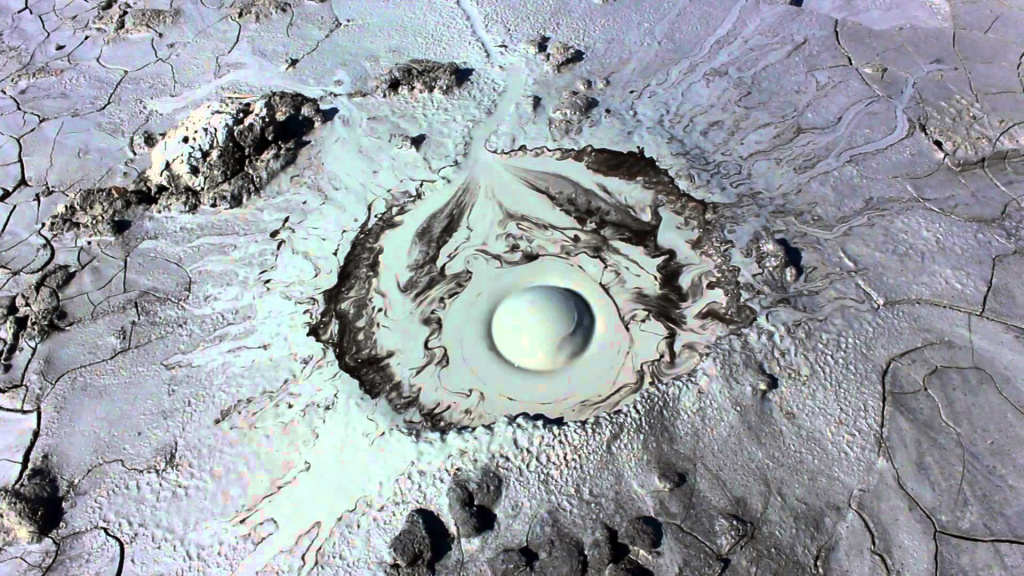 The largest one is the Yuzhno-Sakhalin mud volcano (47 ° 5'sN 142 ° 35'E) - is located in 24 km from the capital of the region in the foothills of the Kamyshovy Ridge, near the Novodeverenskaya railway station. The height of the flat cone is about 300 m above sea level. His griffins are like a series of mini volcanoes, as if someone is raising them like seedlings. At different times in Yuzhno-Sakhalin there are from 20 to 40 breathable griffins and boilers. Vegetation appears in 5-10 years after the eruption. The diameter of the Yuzhno-Sakhalin volcano is ~ 200 m. The most powerful in the historical period of observations is the eruption in 1959, when the clods of dirt reached the railway. The Yuzhno-Sakhalin mud volcano is unique in the chemical composition of the gas. Unlike most others, carbon dioxide prevails, and not methane.

The pilgrimage to the mud volcano, both organized and spontaneous, goes from May to October. Skipping is not necessary, but without a guide, and especially at night it is dangerous to walk here - you can get lost or fail.

"Yuzhno-Sakhalin mud volcano is a geological monument of nature of regional importance, it is impossible to build here on motor transport, it is impossible to build bonfires!" - says Rafael Zharkov, Ph.D. in Geography, leading researcher of the laboratory of volcanology and volcanism of IMGG FEB RAS. "But, alas, some manage to drive into this mud even on moto and quad bikes, visitors break griffins, stick sticks, measure depth, take dirt with them. All because there is no guard. True, in 2016 year there the path was improved, put benches, a gazebo, sold-out with information. But on the plate there are certain blunders, it was made without consulting with scientists. There is a danger from the volcano, Yuzhno-Sakhalinsky erupted quite powerfully at the end of 2001. Mud flows descended into the 2 side. Because of gases, eruptions can be sharp with a fiery column, as happens, for example, on mud volcanoes in Azerbaijan. In unsuccessful circumstances, people may die. People, do not stick a stick, so I'll tell you: the depth is about 10 meters! On the surface of mud boilers are meters and a half in diameter. We did geophysical work, scanned this surface, and found that at a depth of 7-8 meters the funnel of the mud boiler narrows and passes into a crack. If you jump there, you can drown "- warns the scientist. 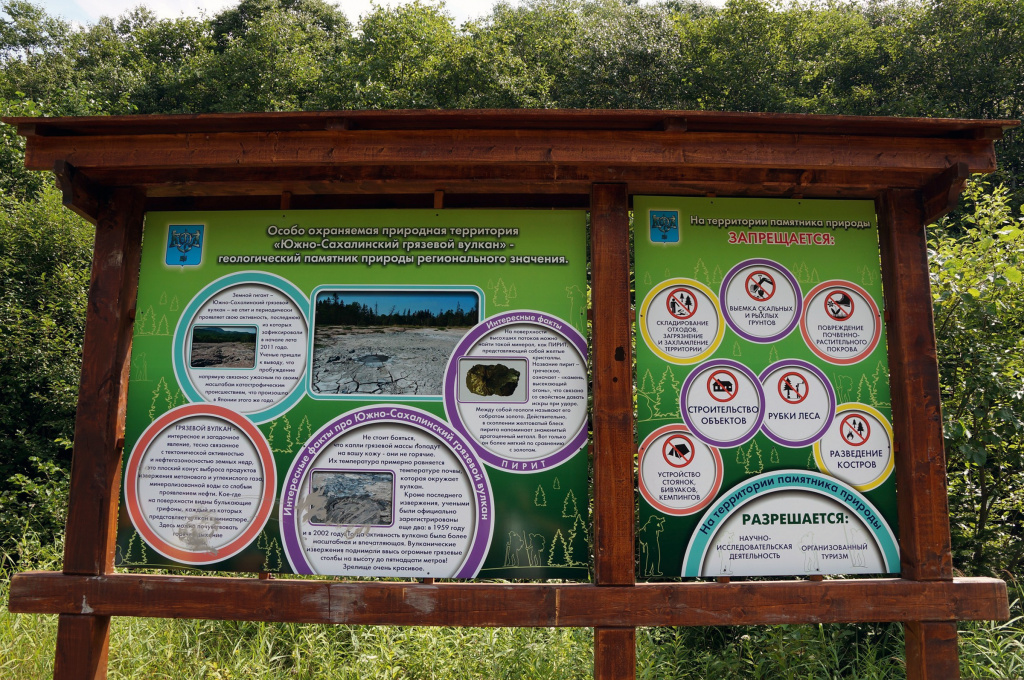 Photo: Information board at the Yuzhno-Sakhalin mud volcano. Sergey Pervukhin

At the Sakhalin forums, the culture of visiting cold volcanoes is hotly debated. The owners of 4WD and mountain bikes are hampered with mud - the traces of their technique there are the most. 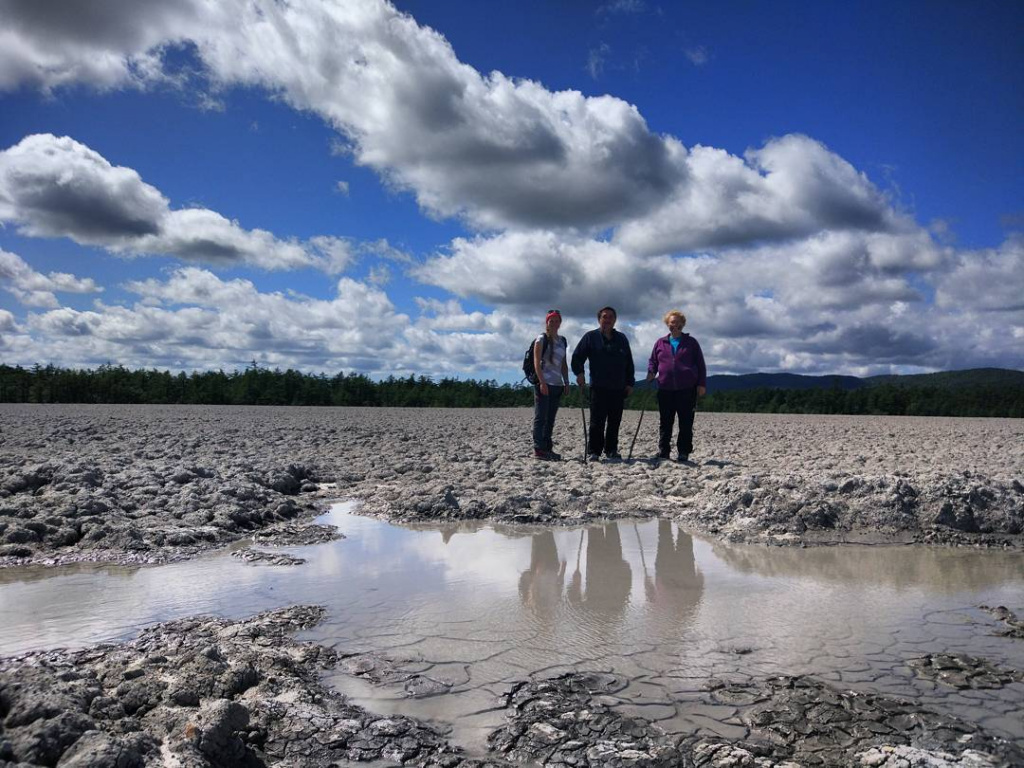 The second largest mud volcano in Sakhalin, (48 ° 13'sH, 142 ° 35'E) is located at 167 km north of Yuzhno-Sakhalinsk in the headwaters of the Vulkanka and Pridorozhny rivers. This brand is behind natural armor - swamps, and hordes of ticks and mosquitoes.

Mud volcanoes of the Pugachev group are a monument of nature of regional importance (the status is assigned in 1983) with a total area of ​​1180 ha. "Chip" Magunthana, the main of this group - a top view, a bright geological anomaly. The volcano is like a giant eye, composed of concentric rings. They acquired it after the eruption, when the mud evenly spread out in all directions, without forming "languages." 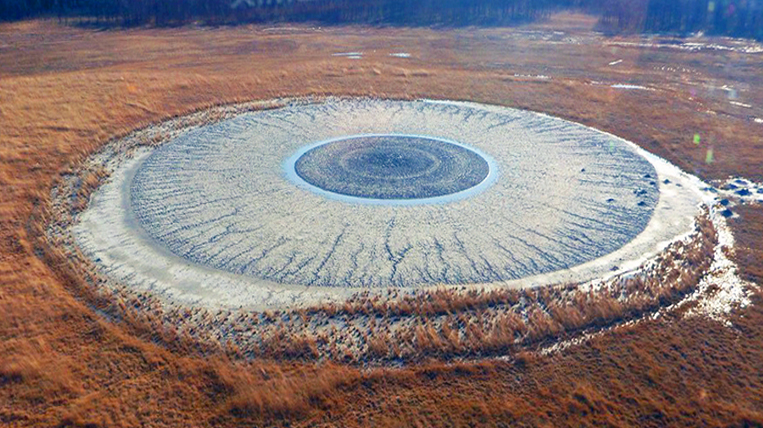 "Magunthan is a group of volcanoes with a huge ancient mud field, which can be easily seen from outer space," Sergey Pervukhin, Candidate of Geographical Sciences, guide to Sakhalin Island. “The field in the form of an ellipse 2,1 × 1,7 km is elongated from the southwest to the northeast and is formed by three volcanoes: Northern, Central (Main) and Southern. Apart from them, to the northeast, about 4 km, is the Vostochny mud volcano. Maguntan differs from the Kerch and Taman volcanoes, first of all, in its shape. This is not a classic salsa - a recess in which you can lie down, and not standard large cones, 5, 10 or more meters. According to the testimony of Japanese and Soviet researchers, the strongest eruptions took place on Maguntan in 1929, 1934, 1961, 1967, 2005, when the mud jets flew up to 50 m. The mud streams broke trees, and the noise, according to eyewitnesses, was like the roar of a jet engine ... The composition of rock fragments captured by the mud substrate while moving in the volcano's mouth is a complete set typical for the Upper Cretaceous (the last period of the Mesozoic era). This is also evidenced by the finds of fragments of the fauna of ammonites and inoceramus, which suggests that the volcano's corpses are located in the Upper Cretaceous deposits, at a depth of 2-3 km. "

Here, too, are endemics that are listed in the Red Book of the Sakhalin Region: wormwood, withered Sugawara, Sakhalin primrose and Czlevlya pike.

It is located next to the famous Daginsky thermal springs, near which there are healing mud on the shore of the bay. They come to the surface through "funnels" on the shore. In the waters of the Daginsky mud volcano, as well as in the waters of Yuzhno-Sakhalinsky and Pugachevsky, bromine, boron and iodine are contained.

Is it useful to smash face on Sakhalin? "My point of view is that the curative nature of volcanic mud is determined by the strength of man's faith," says Valery Ershov, head of the research department of the material composition of the geospheres of the IMGI FEB RAS. "I always show two hands: one is always in the griffin of a mud volcano, I take samples, something else, the other in the air. I suggest you look at the difference. But there is no difference! "

His colleague from the laboratory of volcanology and volcanic hazard, IMGiG FEB RAS Rafael Zharkov, shared the results of the research: "For comparison, there is more mineralization in the Dead Sea than in Sakhalin sources, on the other hand, it is not known whether such an organism needs such a large mineralization," says the leading researcher. "For example, in the Yuzhno-Sakhalin mud volcano, the content of minerals in water is 15-20 grams per liter, that is, 1,5 times less than in seawater. Not far from the Yuzhno-Sakhalin mud volcano, we have a large sanatorium "Sinegorskiy Mineral Waters", there mineral waters with arsenic. So, this deposit has one origin with the waters of a mud volcano. But since it is a natural monument, it is prohibited to remove dirt from a volcano for medical purposes ". 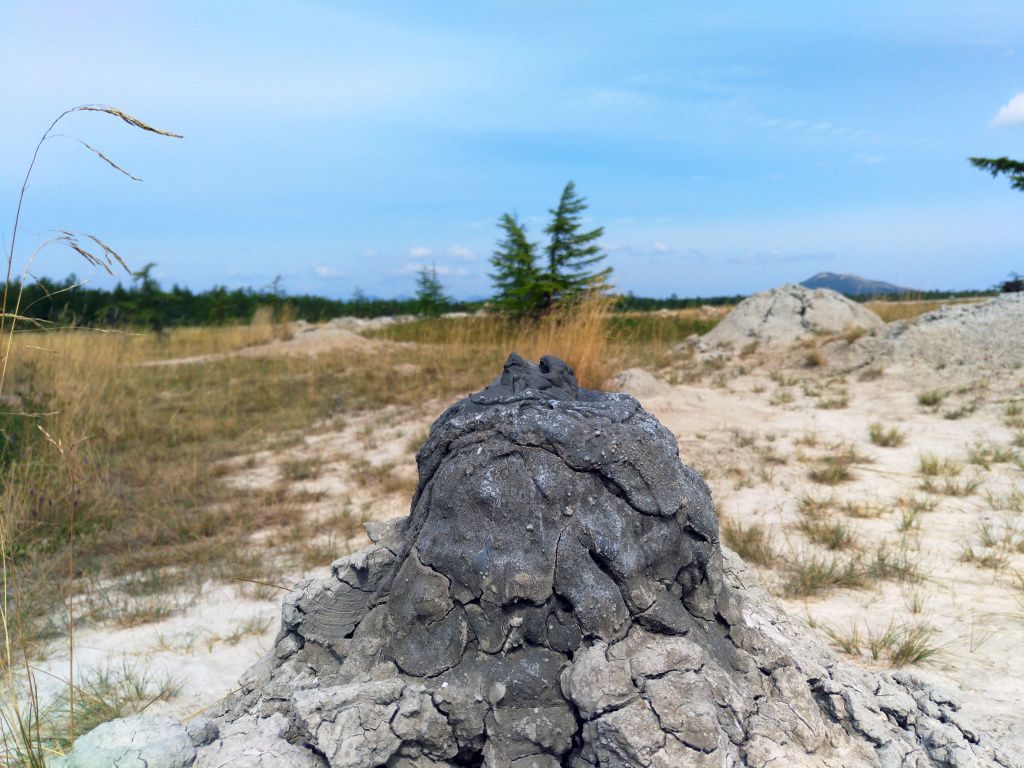 But you can meditate with griffins and mud pots on the ever-changing patterns, listen to the cold broth, pull strange odors. To maintain the Sakhalin miracle of one improvement - ecological paths and plaques - is not enough, seasonal protection is needed, which would only let pedestrians, followed the order and cleanliness. Scientists with ready-made projects and travel agencies, who are already ashamed not only for foreigners but also for fellow countrymen, often asked officials about it. With all the rather big budget of the region, this has not been found yet.

The editorial office of East Russia thanks for the help in preparing the material of the research staff IMGiG FEB RAS Valery Ershov and Rafael Zharkov, and the guide-guide to Sakhalin Island Sergei Pervukhin.
Tags: Attraction nature mud volcanoes volcano tourism Travel Sakhalin 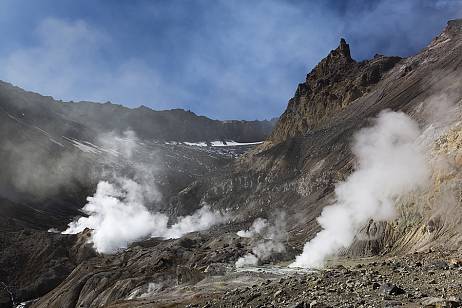 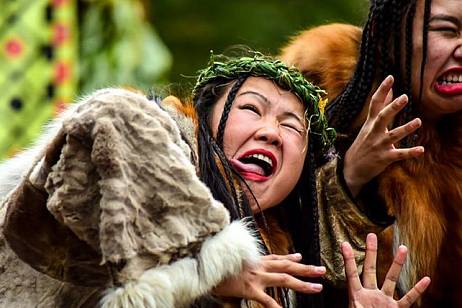 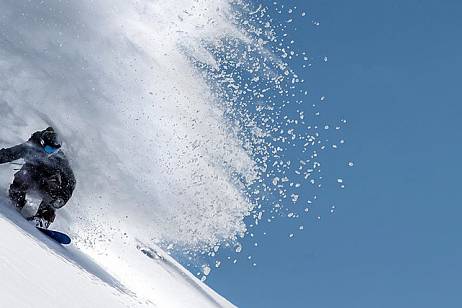