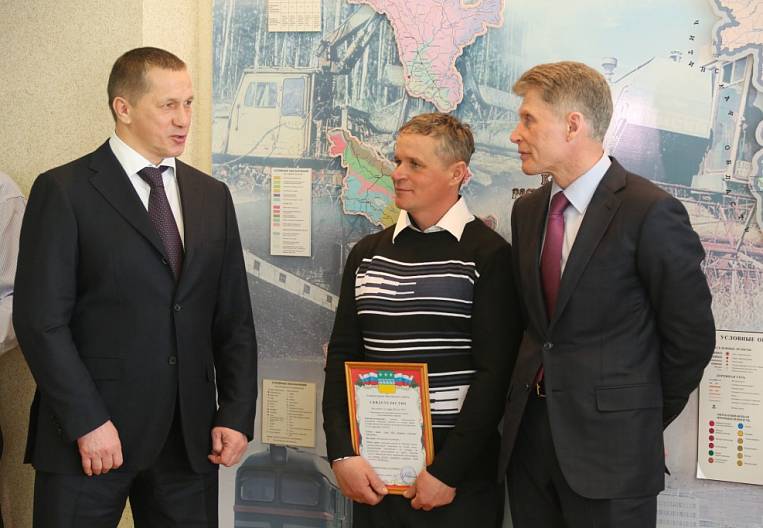 Deputy Prime Minister of the Russian Federation - Presidential Plenipotentiary in the Far Eastern Federal District Yuri Trutnev paid a working visit to Blagoveshchensk and presented the first five certificates for a free hectare of land. It is noteworthy that it was in the Amur Region that the idea of ​​a free hectare was born.

Arable land will be

The first certificates for a free hectare of land were received by five Amurans with a good local bonus: according to the law that was earned in the Amur region two weeks ago, every inhabitant of the region has the right to 10 ha of land, but it is already decided that this considerable size of the land will double. While the plot is issued for three years to maintain a personal subsidiary farm and peasant farms, and if the entrepreneur succeeds in this time to launch a business on it, is transferred to gratuitous ownership.

“We are confident in those to whom we give this land, - said the head of the region, Oleg Kozhemyako. - We know all these people: they are respectable peasants. The head necessarily meets with each applicant and studies his business plan. We are ready to help such people realize their plans. "

Attracting people to work on the ground will help the Far East to survive the crisis faster, we are confident in the governments of the country and the region. Yes, and farmers, as it turned out, such support will not hurt - due to the introduction of new land into circulation, they will be able to expand their farms and increase the number of jobs.

“Well, before we didn't have arable land at all - now we will. And this is juicy food: pumpkin, potatoes, we will sow corn - food that is vital. And now you can not buy it, but grow it yourself, - these are the prospects, ”said Grigory Zhuravel, the head of the farm from the Zavitinsky district, the owner of a certificate for 20 hectares, with EastRussia.ru.

Earth enough for everyone

Yuri Trutnev, who presented the certificates, promised in the future to make the procedure for obtaining lots unprecedentedly simple and taking no more than 10 minutes. In addition, restrictions that still apply to land should be lifted before the end of the year. Since the adoption of the law in the Amur region, 35 people from 10 districts of the region have lined up for a hectare of land.

“The fact that the Amur Region was the first in such an important matter is very good,” the Deputy Prime Minister stressed. “This means that we are walking in the same direction - we are looking for ways to help people cope with difficulties. And how much land to give - 10, 20 or 50 hectares - let the local authorities decide. Our task is not to do this one-time, but to really work out land legislation in such a way that it is comfortable for people and meets all their needs. It didn’t force people for years, like today, to run along the corridors and receive papers, but to ensure that people can see online how the land is allocated, that no one is cheating, no one is hiding anything anywhere ”.

According to Trutnev, at the moment in the Far East there are more than 600 million hectares of land of various categories in state ownership, which can be provided for specific tasks - construction, farming or business needs. If we take only the Amur Region, out of 1500 thousand hectares of arable land in state ownership, about 100 thousand hectares remained unallocated. And those rented are not always used for their intended purpose.

“We need to learn to work more efficiently, as it was wrong yesterday. This concerns both the control over the already taken land, and the creation of a new mechanism for the distribution of plots. If earlier the period for allocating land was delayed up to five years, and the period for issuing a building permit - up to 100 days, today there is an example of allocating a land plot for an investment project in three days, - continued Trutnev. - You see, the issue of increasing the number of Far Easterners will be successfully resolved in proportion to the number of new economic projects here in the Far East. After all, the possibilities of the federal budget directly depend on the regional economy. The economy develops - new opportunities appear ”.

In turn, the Governor of the Amur Region, Oleg Kozhemyako, voiced a number of proposals to the plenipotentiary to optimize the allocation of free hectares. Among them is the inventory of federal lands (including the Ministry of Defense and the forestry fund), which occupy up to 90% of the area of ​​the subjects. For example, on the territory of the Amur region, 55 thousand hectares of arable land, hayfields and pastures are included in the forest fund lands, which can be used by citizens, Kozhemyako noted. For the gratuitous provision of these lands to citizens with the possibility of transferring them into ownership, it is necessary to quickly transfer the lands of the forest fund to lands of other categories, for which the governor proposed to transfer powers from the federal level to the level of subjects. This will significantly reduce the time for making decisions, which drag on for a year or more.

“The laws allow granting land to citizens free of charge only to create private household plots and private farms on them. For such an opportunity to appear for business development, for example, for the organization of recreation, tourism, hunting, an apiary, it is necessary to change the federal legislation, here we really need help from “above”, ”explained Kozhemyako.

At the meeting in Blagoveshchensk, the initiative of the Ministry for the Development of the Russian Far East was also discussed to create an information system based on a public cadastral map - using it, Russians will have the opportunity to learn about free land plots in the Far East from any region of the country, and then (if they want to move) submit through multifunctional application centers for their provision.

“In this case, it is important to include information about the formed land plots that have passed the cadastral registration,” stressed Oleg Kozhemyako. “This will make it much easier for people to make a choice, eliminate the delay in the formation and provision of land, and also avoid all sorts of conflicts.”

Recall the first time about the project of a free hectare to the Far East it became known as early as mid-January 2015, when the plenipotentiary Yury Trutnev announced the idea to the President of the Russian Federation Vladimir Putin. The president supported this idea, and at the same time, an appropriate law was being developed in the Amur lobbies to support farmers.

Later, at several meetings, the situation was discussed in more detail both in all sectors of the economy and at individual large enterprises, where Trutnev once again noted that large-scale federal construction projects will provide good prospects for the Amur Region - the Power of Siberia gas pipeline, Nizhne-Bureyskaya HPP, cosmodrome "Vostochny", BAM-2 and a whole group of own investment developments.

“It is important to understand what challenges time dictates to us and to be able to meet them,” the Deputy Prime Minister stressed. - If the federal authorities can help in some way, we, as an embassy, ​​will lobby the interests of the subjects to the maximum. We also discussed this topic today. "

13 March Trutnev plans to continue his work in Blagoveshchensk.