If the surface can not be concreted, it can ... be bandaged. Crumbling banks of rivers, slopes and embankments, trenches, waterways, but even our roads with their eternal patching - all this can be quickly "cured" with concrete bandage. New technology in Russia was presented in the midst of economic sanctions: a company of two Britons who offered a unique way that works in fifty countries of the world, opened a demonstration park in the Istra district of the Moscow region, where you can see how it is done. Everything began from the Far East. 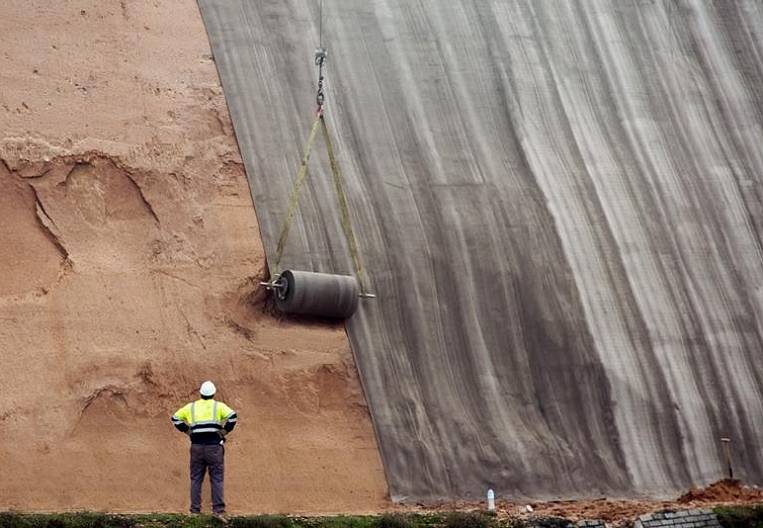 Photo: Concrete Canvas Ltd.
JUST ADD WATER
A cloth of centimeter thickness with a waterproof liner, impregnated with a special dry mortar - this is the concrete canvas. Two strong men are able to roll a roll with such a cloth on any surface, cutting off the desired length and laying pieces of concrete tape overlap. Then the pieces of cloth must be bolted and generously, but gently poured with water. As it dries, the material hardens, becomes waterproof and refractory. That, in fact, and all the know-how.

Coat concrete in rolls came up with two British students, Peter Braven and William Crawford. In the 2000-ies, the guys studied at the Royal College of Arts, specializing in Industrial Design Technologies, and once they set out to make concrete more manageable. And they did it by creating a three-dimensional fiber matrix filled with a special dry concrete mix. After the canvas, when wet, dries, the solution freezes, and the fibers strengthen the concrete, preventing the appearance of cracks. PVC-pad on the bottom surface of the canvas protects the finished coating from moisture.

Enterprising British say that, despite the fact that their product is designed to solve serious construction problems, friends designers and architects turn to the concrete canvas for the embodiment of their creative ideas. They use it even to create furniture!

The company's main facilities are located in the United Kingdom, several factories are operating in the US, there are plans to develop a network of plants in other countries. Among them was Russia.


WHEN OTHER DECISIONS ARE NOT
Concrete Canvas technology is a "sandwich" of textile fabrics with a layer of high quality cement mixture. The canvases are connected by fibers. On the outside, one of the canvases is covered with a PVC layer. In a "dry" form, the concrete canvas demonstrates the properties of a conventional roll material. After wetting, it turns into a high strength reinforced concrete coating. The concrete bed was developed in the mid 2000s in the UK. It is currently supplied to more than 40 countries around the world. In Russia, the canvas was first used in 2014-2015 in Yakutia and Sakhalin.

In both cases, the laying of the concrete canvas wore an experimental character. This technology was still unfamiliar to Russian customers. But at that time she was the most optimal solution to the tasks. It was, of course, theoretically. Any practical conclusions could be made only after laying.

The tasks set are to strengthen the drainage ditches. In Yakutia, these drainage ditches around the Mirny airport, which serves the diamond capital of Russia, on Sakhalin - in the territory of the Chayvo onshore training complex. Nothing, it would seem, is complicated - there are several ways of lining. But, as it turned out later, at both sites their application is either impossible or involves considerable difficulties.

Both here and there are very weak soils, and a harsh climate. In the Peaceful ditches tried to concrete, but very quickly the concrete went cracks. The reinforcement of the ditches in other ways would require the delivery of construction materials, which, because of the considerable remoteness of the facilities, would seriously affect the profitability of the projects. In addition, there was a strict limitation on the timing - and in Yakutia and Sakhalin similar work again because of the climate can be held only three months a year.


A LITTLE THEORY
In theory, Concrete Canvas technology made it easy to overcome all these difficulties. Concrete canvas holds well any soil. It is reinforced with textile fibers and therefore has high resistance to cracks. Together, the individual sections of the web form a monolithic coating with zero mobility. The fabric withstands any temperature changes and more than 200 freeze / thaw cycles. It well withstands mechanical loads, does not collapse under the influence of ultraviolet. A PVC-lining provides a complete moisture-proofness - a quality that is critical in the lining of ditches. The estimated service life of a concrete canvas in the UK climate is 50 years.

As for transportation, the concrete canvas is very "compact". It is estimated that 125 sq. M. Meters of cloth SS8 (that is, thickness 8 mm) will replace two trucks with a prepared concrete solution of 17 tons each. That is, using a different solution of building materials would have taken many times more.

Another important advantage of the Concrete Canvas technology, which completely eliminates the problem of tight deadlines, is extremely fast installation. Concrete canvas is a ready-made solution. This means that no additional materials will be required. By and large, it does not even require surface preparation. The flexibility of the “dry” web makes it easy to circumvent any irregularities. Its installation does not require the use of construction equipment. All installation is carried out by hand tools. The qualification of workers is not of fundamental importance.


A NOW PRACTICE
The work on reinforcing the ditches around Mirny airport with a concrete bed took three days. During this time, about 1600 sq. meters of CC13 concrete bed (thickness 13 mm). Work on the territory of the Chaivo BCP took three weeks, but about 15 sq. M. Were laid there. meters of canvas. And this was done by a team of six people.

The laying process was no different from stacking on other similar objects. From a roll of a cloth cut pieces of the necessary length, edges by steel stakes fastened in the anchor trenches passing on the top edges of a ditch. The layers of the concrete web were laid on each other overlapping in the direction of the flow of water and connected by screws. The joints were smeared with a sealant. The finished coating was wetted. Since the work in Mirny was already in October, the wetted areas were covered with polyethylene film for the night to prevent freezing.


CHANGES NOT DETECTED
By the way, on Chayvo the theory was first decided to test in practice. A year earlier, with the help of a concrete canvas, a small section had already been fortified to see how the canvas would behave in winter conditions. In Mirny, the Yakutniproalmaz Institute carries out regular monitoring of the finished coating. So far no negative changes have been detected.

“Russia has a peculiarity: international standards must meet our requirements,” says Igor Bogorodov, director of the Russian partner of a British company. - After all, we live in a special environment. For example, in Europe, testing the web for the number of freezing and thawing cycles should be 200 cycles. And according to the requirements of Russian legislation, there should be at least three hundred of them.

"In Russia, temperature fluctuations can be from -50 to + 50 degrees," says Peter Braven, the second inventor of the concrete canvas. "These are absolutely extreme conditions, but the application of our technology in Yakutia and the tests that we conducted confirm that our canvas is really wear-resistant, its quality meets all standards.

In Russia they build a lot and in a big way. The "Vostochny" spaceport, aerodromes, facilities of the upcoming World Football Championship in 2018, oil and chemical enterprises - each of these projects can be optimized with the help of concrete tape. Any work with concrete involves related materials, large human and technical resources. Whether it's just to unwind the roll, pour it with water and leave to dry. Even "crex-pex-fecs" is not necessary.

- On the territory of Russia we are engaged in the introduction of concrete canvas for a year and a half, - says Igor Bogorodov. - At the last Avtodor exhibition our canvas was called the innovation that changes the principles of road construction in general. But this technology can be used anywhere! It is more durable than ordinary concrete, absolutely safe for the environment. And from the logistic point of view, the canvas has many advantages. For example, a medium-sized roll replaces two 17-Titanium concrete carriers! One roll of cloth is enough to cover with concrete 200 square meters. On one truck-platform, you can put 17 rolls, which is comparable to 34 concrete trucks. Imagine what a transport advantage!

For its installation of a concrete cloth, 90% is required for less materials than for traditional concrete pouring, and laying takes 10 less time. And if it is a question of protecting the soil from erosion or slopes from shedding wherever the use of heavy equipment is impossible, then the concrete canvas becomes the optimal solution.

The company responded evasively to questions about the cost of concrete bandages, emphasizing that it is cheaper than monolithic reinforced concrete, equivalent to the cost of precast concrete, and cheaper in terms of labor costs.

Maybe the truth of one Russian disaster will be less, and in the arsenal will remain only fools. Otherwise than to explain that this bandage was invented not by us?
Tags: building concrete Technology Peaceful Sakhalin United Kingdom 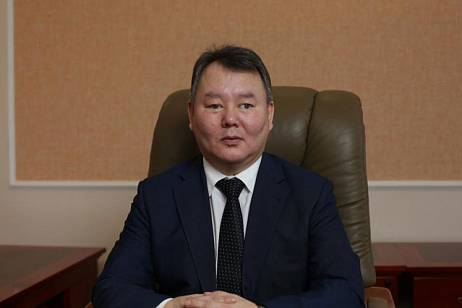