Foreign countries will help us 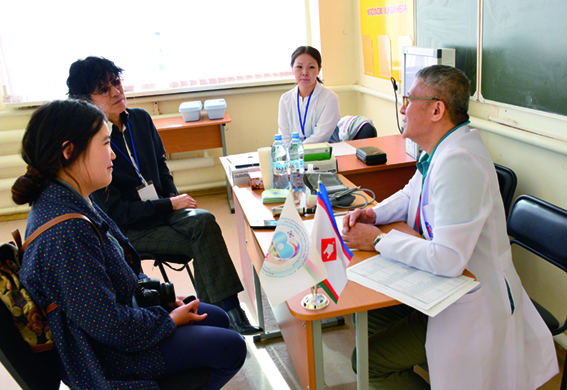 According to the Global Spa & Wellness Summit (GSWS), by 2017, 50% of the medical tourism market will be in Asia, Latin America and the Middle East.

Over the past 10 years, the medical tourism market has grown more than 10 times. According to information published at the international congress on medical tourism (Global Wellness Tourism Congress - GWTC), the current 2004 billion for 40 imperceptibly turned into half a trillion US dollars. On this, according to experts, growth will not stop. Sustainable consolidation - on average almost 10% per year - will continue for at least five years.

If earlier the top lines in all rankings were occupied by such countries as Germany, Switzerland and Israel, traditionally famous for expensive and high-quality medicine, today the centers of world medical tourism are shifted to the countries of the Asia-Pacific region, whose services are much cheaper and are increasingly accessible to the mass audience.

Currently, the top ten countries, leading in the number of tourists in the medical sector, include Asia-Pacific countries: South Korea, Singapore, Thailand. The leading position in this list is occupied by South Korea. Annually, only about 120 thousand foreigners visit the country for medical visas. However, it should be taken into account that the real statistics are much larger: many clients of medical centers enter the country on ordinary tourist visas and do not make official documents. The popularity of the country is very simple. Other things being equal - using the latest technology, high qualification of doctors, a decent level of service - the cost of surgical operations in South Korean clinics is on average 10 times lower than similar operations in Japan or the US. The direction to combat cancer is also of great advantage - in this segment prices are lower than even in Singapore and Thailand.

The potential for the development of medical tourism in South Korea is far from its ceiling. This is largely due to state policy encouraging the commercial treatment of foreigners while preserving the necessary privileges for the local population. According to the forecasts of the Korean National Tourist Organization, by 2015 the number of newcomers will approach 400 thousand people per year.

Until recently, the number of Russians who annually come for medical services to South Korea fluctuated around 10 thousand people, a large part of whom live permanently in the Far Eastern regions of the Russian Federation. In connection with the abolition of visas, this figure will inevitably grow, as interest in the medical tourism sector in our country is traditionally high. So, search engine statistics in the search engines shows that about 6,2 million Russian-speaking Internet users are monthly looking for relevant offers of medical care abroad. High interest is explained by the inaccessibility of many medical services in Russia, as well as the cost of their implementation.

It is logical to assume that in the conditions of a developing market and a growing number of medical tourists, Russian legislation requires close attention to issues of treatment abroad. Moreover, the excessive development of this direction and the inevitable outflow of investments can hit on domestic medicine. Russia should not only actively participate in international medical tourism forums, but also take concrete actions to develop its own high-tech centers capable of meeting the needs of the local population and making a worthy competition to foreign analogues. Particular attention in this matter should be paid to the Far East of Russia, where the shortage of personnel and technology is particularly acute.

In fairness it should be noted that in recent years serious progress has been made in this direction. An example is the construction of multifunctional medical centers throughout the country. One of these facilities, the hybrid operating room, was opened in Khabarovsk in July of this year. The only operating theater of its kind in the entire Far East of Russia, which allows for particularly complex operations, is located at the Federal Center for Cardiovascular Surgery. The total cost of the project was 140 million rubles, the services of the operating room, which will be able to accept patients up to 300 per year, will be available to all residents of the Far East.

Medical volunteering: the experience of Yakutsk

In addition to medical tourism, which is shifting to the countries of the Asia-Pacific region, there is a tendency in the Far East to expand charitable volunteer actions with the participation of foreign doctors, as well as to exchange experience and consult our experts in the best universities and clinics abroad.

An example is the cooperation of Yakut Russian doctors with colleagues from South Korea and the Philippines. On August 22-29, 2014, in Yakutsk, the Republic of Sakha (Yakutia), a charitable medical mission of doctors from three countries “Healthy Nations of Asia” took place, during which more than 700 patients from the poor were diagnosed.

Everyone knows the high level of medicine and training of medical personnel in South Korea. That is why the experience of Yakut doctors cooperating with foreign colleagues is interesting. In accordance with the national project "Health", and then the modernization of healthcare during its trips to Primorsky Krai, the management of the Aurora Medical Clinic from Yakutsk has established links with the Medical Center at Ken Hi University of Seoul, South Korea, one of the leading Korean clinics. First, Korean doctors were invited to diagnose Yakutians as part of a charity project. Residents of the Far North often suffer from ENT diseases, rheumatism. In 2012-2013 years, 286 diagnoses were diagnosed by foreign doctors for these diseases, 99 people with liver diseases also underwent diagnostics.

In June this year, the municipality and the Public Chamber of Yakutsk hosted the International Conference "Cities and People: Civil Initiatives - the formula of mutual trust". It was delivered by Professor Chung Seng Cho from the Medical Center of the University of Ken Hee with a draft medical volunteer mission. The Public Chamber of Yakutsk responded and initiated the arrival of the Koreans, and they, in turn, invited Philippine doctors from the Medical Center of St. Luke, one of the leading clinics in the Philippines. Five Korean and three Philippine doctors arrived in Yakutsk to act as experts in counseling patients. Consultations and diagnostics were conducted by otolaryngologists, endocrinologists, gastroenterologists, pediatricians and family doctors.

The mission involved 26 Yakut doctors. The head of the Yakut City Hospital No. XXUMX branch office Lyubov Sergeeva, who worked with Professor Campomanes (by the way, a relative of Florencio Campomanes, who was FIDE President for a long time), says: “This is a good exchange of experience, in particular, methods of communication between the Philippine doctor and patients are interesting. We help with the examination, when translating patient complaints into another language. ”

Prof. Dr. med. Benjamin Campomanes has been involved in charitable missions for most of her life in medicine. First I traveled through my own country, now through many countries of the planet. Russians Mr. Campomanes warns: "90% cancer of the throat due to smoking and drinking alcohol."

The mission participants say that the exchange of experience is necessary in the process of introducing new technologies. Foreign colleagues noted the high potential of Russian doctors and the pace with which they master new techniques and technologies. At the same time, the severe natural and climatic conditions of Yakutia have their imprint on the experience of Yakut doctors, and some diseases have much to learn from them.