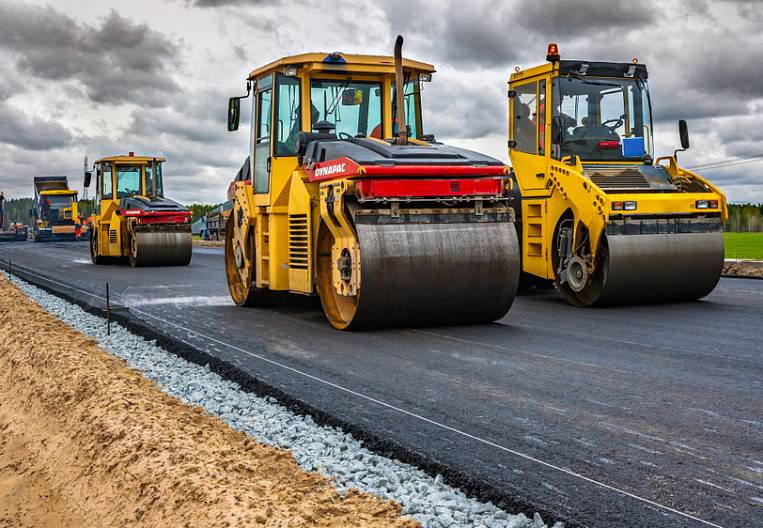 Photo: Shutterstock.com
In the near future, a red triangle and a man with a shovel inside it - “repair work” can become the most frequent road sign in Transbaikalia. In the region, they intend to bring to the "normative state" - that is, in the divine form - the majority of city streets and highways between settlements. Such work is part of the national project “Safe and high-quality roads”, and substantial funds are provided for the Trans-Baikal Territory. The regional budget will also contribute to the construction, repair and modernization of roads. Of course, there is a lot of work: the total length of public roads in the Trans-Baikal Territory is over 21,6 thousand km, more than 7 thousand km of them are regional and inter-municipal, they are also the “dead” and in need of restoration. Problems and natural disasters added: 2018 floods and 2019 fires, the elimination of the consequences of which drew up the reserve fund almost completely and demanded multi-million subsidies from the Center for the construction of new bridges to replace burnt or demolished roads, re-laying the roadway, etc.

However, the struggle with the consequences of the elements is only part of the plans. "War is war, and the national project is on schedule." For the repair of roads on the regional project "Road Network" during 2019-2024. Transbaikalia has already been allocated about 21,5 billion rubles. They will also update city streets and highways, build bridges and junctions, drainage systems and overpasses, level the roadway and apply markings. In Chita alone, repairs will affect 17 objects — naturally, on schedule, and not all at the same time, so as not to aggravate the already annoying traffic jams. By the end of this year, according to representatives of regional authorities, it is planned to repair about 90 km of roads of regional and inter-municipal significance, within Chita - 29 km. Before 2024, the 1078 km of roads throughout the Transbaikalia and 60 km of the metropolitan area will return to normal. As the Acting Governor Alexander Osipov explained, this year the region will receive 6,5 billion rubles to carry out the necessary road works on the 150 km of large and small roads. Also, the head of the region added, automatic weight control points will be installed at the Nerchinsk-Shonoktui and Balyaga-Yarmarovka sections. Otherwise, heavy vehicles, which run along highways with great intensity, in a short period of time can reduce all the efforts of the road workers to zero.

The condition of the roads is a sore point for the whole country with its huge distances, harsh climate, abundance of heavy trucks, lack of good road equipment and far from rich local budgets. At the end of June, the State Council of the Russian Federation, chaired by the President, discussed the problems of road quality and safety. According to the decisions that the State Council made and developed in the presidential instructions and government documents, the focus will now be on the development of the regional and municipal road network, as well as the streets in major urban agglomerations. This is important both for people and for the economy as a whole. "Everyone understands that the road is good, and off-road is bad, but not everyone understands, unfortunately, that the availability of roads for our country, good quality roads, is extremely important and of particular importance given the vastness of our territory. Connectivity of the territories of the subjects “The municipalities among themselves are extremely important for the economy and for the citizens' social well-being,” said Russian President Vladimir Putin in his speech at the State Council. According to the data provided by the head of state, the federal highways in the country have become significantly better over the past 9 years, 83% of which fully comply with the standards. A good regional roads in the country - less than half of the total. The President believes that the results of the work directly depend on the activity of the regions: each of them should soon develop and adopt a “corresponding program, not declarative, but realistic,” and designed for a long period - no less than before 2024. This will allow to purchase expensive equipment in advance, to reserve building materials, to train specialists, to develop mechanisms of public-private partnership, to make not the exception, but the rule “life cycle contracts” in the construction and maintenance of roads.

Judging by the materials prepared by the working group of the State Council, Transbaikalia on the quality of its roads and on the level of safety on them - until the end of the national rating. Meanwhile, paraphrasing the phrase of a famous literary character, the roads for this region are not a luxury, but a means of survival. Transport accessibility (or rather, inaccessibility) is the main obstacle for many investors who show interest in Trans-Baikal, but quickly lose it, having calculated the cost of logistics. Even so, in terms of investment activity, the region is in the Far Eastern District with strong middle positions - according to experts, in fifth place, ahead of the largest regions and Buryatia. In the nationwide ranking in terms of investment per capita Transbaikalia 37 ranks on the basis of 2017, and it is very good. After the final commissioning of such large projects as the Bystrinsky GOK and the metallurgical plant at the Udokan copper deposit, as well as the creation of a center for the nuclear industry in Krasnokamensk, the region has every chance to rise to this position in the list. The reconstruction of the road network will give it additional impetus to development.

The region has a favorable geographical position: it is located on the way to Mongolia and China, with which it borders, BAM and federal highways pass through its territory. The development of air transportation and the modernization of railways are aimed at improving the transport accessibility of the Transbaikal region - not only BAM, which is significant mainly for the northern regions of the region, but also Zaborodskaya Railway, whose freight turnover is now gradually increasing. But the road economy in any case remains a priority - without it, the normal life of Transbaikalia is simply impossible.

The national project “Safe and High-Quality Roads” outlines plans for the whole country: in 5 years before 80,% of state contracts in the field of road construction should include the use of new and best technologies and materials. Up to 70% of the total number of contracts will be carried out on the principle of the life cycle of the road - from its design and throughout its existence. So far, the national average is several times lower. Transbaikalia such goals set for itself now. That is why, representatives of the regional authorities explain, new methods of planning have been applied in the road sector, and they don’t spare money for construction and equipment, but they require a decent return from these investments. So, according to Sergey Krivoshchekov, head of the road economy department of the ministry of Transbaikalia, unique high-performance equipment was used to repair roads in Chita, which is the only 7 copies in the world. The work is coordinated with the plans of public utilities, so that in a few years it will not be necessary to re-open the canvas for the repair of outdated communications. A huge amount - more than 560 million rubles - was invested in the construction of the 10-kilometer section of the Mogoytuy-Sretensk-Olochi highway in the Mogoytuy district. But these expenses will pay for themselves: the road is strategically important for the entire economy of the region, will contribute to the revitalization of traffic and cross-border cooperation.

After the floods of 2018, 182 km of regional roads and over 30 bridges became unusable. Most of them have already been restored: on 2020, only the automobile bridge in the north of Chita remained. Another 1.5 billion Russian government has allocated for the repair of other regional roads in Transbaikalia, city streets and an emergency bridge in the village of Darasun of the Karymsky district - the bridge demanded 205-million investments. But it will allow normal traffic along the federal highway А-350 Chita-Zabaikalsk-border with the PRC. As part of the BKAD national project, the Mangut-Kyra highway with a length of 68 km will be repaired - this is the only road that connects more than 15 settlements of the Kirinsky district with Chita. Modernization is waiting for the regional Mogotuy-Sretensk-Olochi highway, where the movement is intensive, but difficult and unsafe, and there is no alternative. The very first contract under the national project was the repair of a section of the Darasun-state border with Mongolia leading to the Alkhanai National Park. During the year, 30 is visited by thousands of tourists from Europe and China. Alkhanai is important for the region and as a spiritual center - this is one of the five sacred places of northern Buddhism, to which pilgrims constantly aspire.

At present, tenders are held, contractors are selected for repair and reconstruction works. Reliable, not just "cheap." It is no coincidence that during the State Council more than once raised the question of the criteria for such selection and anti-dumping measures, high requirements to the quality of work and optimization of the tender procedure. As explained. Minister of Territorial Development of Transbaikalia Konstantin Suzdalnitsky, companies must possess their own equipment and resources, to prove their professionalism. For some contracts, experienced contractors from other regions of the Russian Federation have already acquired the right, the quality of work of which the Baikal residents will be able to evaluate in the very near future. And, the regional authorities are sure that the result will not disappoint people.
Tags: Transbaikalia Chita national project The roads infrastructure transport Alexander Osipov