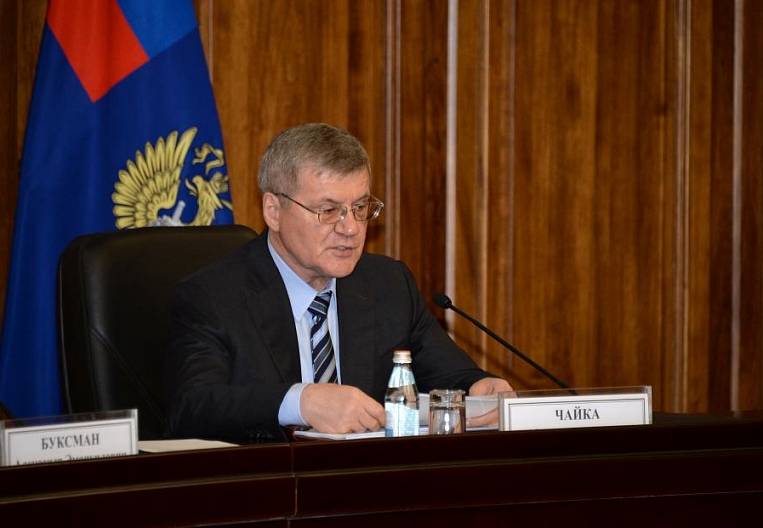 Photo: Press Service of the Government of Khabarovsk Territory
To gather in Khabarovsk a meeting dedicated to the observance of legality in the joint construction and overhaul of houses in Siberia, the Urals and the Far East, Russia's Attorney General Yuri Chaika, according to some sources, was helped by another event - scheduled for 5 June in the home of Mr. Chaika Nikolaevsko- Cupid 50-anniversary of the release of classmates Prosecutor General from school. The solemn event took place, and on June 11 the Prosecutor General returned to Khabarovsk, slightly late - instead of 6 local time, the meeting began at the beginning of the first. True, it immediately became clear that Yuri Chaika, together with the governor of Khabarovsk, Vyacheslav Shport, met with the residents of Khabarovsk, "waiting for a long time to receive the apartments actually paid for them." "The authorities, military authorities and prosecutors must take all necessary measures to eliminate violations committed during the construction of these houses," Yuri Chaika said, opening the meeting.

It is not difficult to guess exactly which houses it is: on the eve of the picket, with demand to fulfill all the obligations, several stakeholders came out, including those who build 2013 from 6 the year (until May 2017 - Dalspetsstroy "under the Spetsstroy of Russia). The enterprise is in a difficult financial situation and can not, according to the prosecutor's office, finish building 8 houses, for which 2013 for 2018 years, the developer concluded 402 contract of participation in equity construction for the amount of 1,6 billion rubles. The supervisory authority can not influence the situation: it introduces representations (for 2016-2017 years this happened 14 times), according to the results of which administrative cases under Art. 14.28 CoA RF - and all ends with fines. In addition, the Main Military Prosecutor's Office has twice informed the Defense Ministry "about the need to take additional measures for financial rehabilitation and completion of the construction of houses," the last time in February 2018.

"I hope that today's meeting with co-investors will help us jointly solve these issues," Vyacheslav Shport said to the Prosecutor General when he was given the floor. According to the governor, in the region 65 developers are building 103 houses with the involvement of equity holders. The amount of funds attracted - 31 billion rubles., 11 houses are problematic, the governor acknowledged. "Those houses that are problematic, we have built a" road map "for them today - to help the affected citizens, as included in the register (stakeholders of problem houses - EastRussia), and not included, but in critical condition. A working group has been created, we are helping to resolve issues with networks, we are using all mechanisms, together with the regional prosecutor's office, three draft laws have been drafted aimed at restoring the rights of equity holders, and they will be brought into the Duma on 30 May, and I hope we will take them by autumn, "said Vyacheslav Shport .

Against the background of the number of problem houses in Siberia and the Urals in the Far East, the situation looks good, which, however, is understandable: the scale of housing construction here is not comparable with the Ural or Siberian ones. "The number of houses for which the deadlines for delivery were disrupted in three federal districts is still significant - 224 houses. Only in the Novosibirsk region there are 43, in Chelyabinsk - 36, in Omsk - 26, Tomsk - 17", - cited statistics on the Siberian, Ural and Far Eastern Federal Districts Yuri Chaika. However, in the Far Eastern Federal District, law enforcement agencies have something to do, as follows from the materials for the meeting.

In the draft decision following the meeting, several items related to specific problematic objects in the Far East fell into place. Thus, the military prosecutor's office of the Far Eastern Military District together with the FSB and the Prosecutor's Office of the Khabarovsk Territory by August of the year 2018 should check the legality of the construction of houses by Kubiak-Pavel Morozov, 29 and 26. Investigation Department of the Ministry of Internal Affairs of the city of Khabarovsk 13 April instituted criminal proceedings in part 4 art. 160 of the Criminal Code of the Russian Federation (embezzlement) on the fact of spending part of the equity holders of LLC Dialog (summarily entered into equity participation agreements for 2 billion rubles) "for other purposes." In Yakutia 30 March criminal case on h. 2 art. 200.3 of the Criminal Code of the Russian Federation (raising funds from citizens in violation of the law on participation in shared construction) with respect to the regional public fund for supporting pensioners 'initiatives - for sending co-investors' funds for payment of loan agreements, salary arrears and other construction costs. In Petropavlovsk-Kamchatsky 7 February structures of the TFR initiated a criminal case under part 1 art. 293 of the Criminal Code of the Russian Federation (negligence) in respect of the acting. head of the city district "responsible for issuing permission to the developer to commission an object built with poor quality concrete."

Closing the meeting, the Prosecutor General again returned to the situation in Khabarovsk. "At the federal level, there should be regular exchanges of information with the Ministry of Construction, Rosfinmonitoring, the Federal Treasury, and other authorized bodies." On Khabarovsk, we need to develop an effective mechanism for resolving this problem and reconsider our approaches, and before the election of the governor in Khabarovsk solve this problem - yes , Vyacheslav Ivanovich? " - Yuri Chaika said with a smile. "Thank you," said Vyacheslav Shport, who heads the region from the year 2009 and gathers in September for the next election. The Prosecutor General also instructed the military prosecutors "to analyze the reasons for the existing problems when the Defense Ministry is building the shared construction projects, to conduct a set of supervisory measures, following which to carry out a principled prosecutor's response aimed at restoring the violated rights of citizens." "On the results to report to me personally." This is exactly the problem today, "Yury Chaika said.
Tags: supervision building Interest holders housing Far East