The severe climate of Yakutia since ancient times made people develop physical strength. To do this, many centuries ago they came up with a tug of war. Places take up little, equipment requires a minimum, and the result is brilliant - men become strong and hardy. The lesson has survived to this day, has become a recognized sport that is being developed around the world. 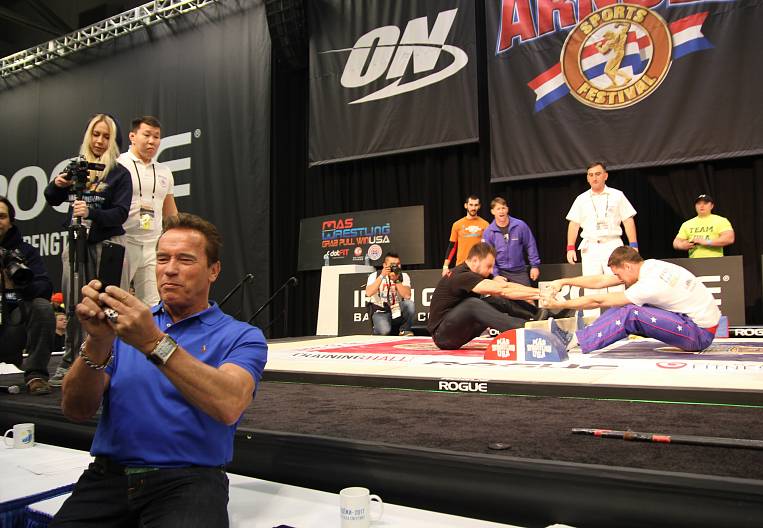 This is the only contactless fight in the world - the opponents do not touch each other in a duel. In ancient times, there was a small contact - there was no beam between the rivals, they rested on each other's legs, but the rules changed, and now the athletes had a barrier on the platform. Mas is translated from Yakut as a stick, but the prefix "wrestling" is a struggle in translation from English - a modern trend. The Yakuts had no such application. Since ancient times the form of this struggle has been called mass of tardykhyt - pulling the stick.

All ages are submissive

To win, you need to snatch a stick from the hands of an opponent or drag it to your side of the platform. To engage in mass wrestling in Yakutia begin with six years and practically do not finish. For veterans and experienced athletes, they hold veteran tournaments. The legend of this sport Anatoly Baishev is more than 50 years old and he does not intend to finish his studies.

During the fight all parts of the body work, muscles become elastic, to achieve maximum results, wrestlers even go for stretching. Anyone can do wrestling - age, physical training is not important, but to participate in competitions you need a medical certificate, because due to high loads you can lose consciousness or get injured if there are old wounds.

Since 2003, mass wrestling has entered the official list of sports in Russia, and there is an international federation. Now the development of mas-wrestling in the Far East is being conducted by the Khabarovsk resident Ramig Nuruev. Once the powerlifter decided to try his hand at another sport, and in 2012 he went to the first competition. 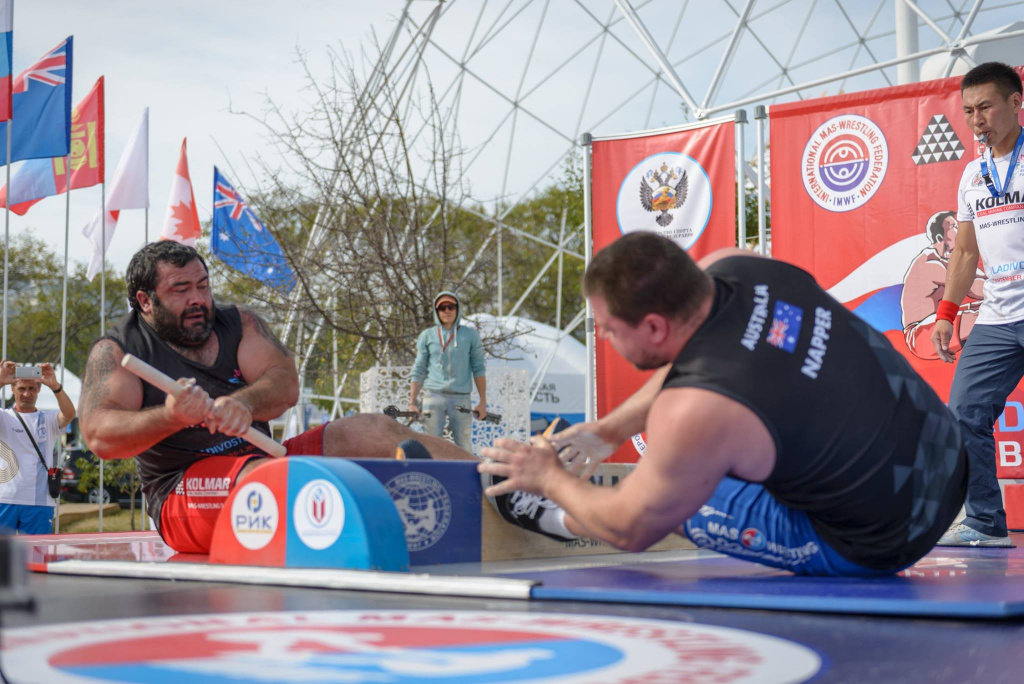 - I go so big, I watch how everyone is warming up, but I do not do it myself. I did not think that it would come in handy. In the first battle my rival was Yakut: 90 kg against my 120-ti. So I flew out of the platform, I got a trauma. After saying, what kind of sport is it? And then I was invited to train in Yakutia. There, I learned all the techniques and tactics, - says Ramig Nuruyev.

Warm-up before a fight is one of the main secrets. Athletes even use warming ointments. This allows you to prepare the muscles for the fight and avoid dangerous injuries. Particular attention is paid to the back, biceps and hips.

Mas-wrestling so tightened Ramiga that a year after the first competitions he headed the federation of this sport in the Khabarovsk Territory and took up his development in other regions of the Far East. Now the struggle is actively promoted in Primorye, EAO, and in the Khabarovsk Territory next year they plan to open a school of mas-wrestling in order to attract children and young people. In the region there is a four-time absolute champion of the Far East and prize-winners of the Russian championship in this sport.

The power of mind

Many come to Mas-wrestling from powerlifting, because strength plays a big role in this sport. However, only strength training for lessons is not enough - you need training in technique and tactics of conducting a duel. That is why in Yakutia mass wrestling is called the power of reason. 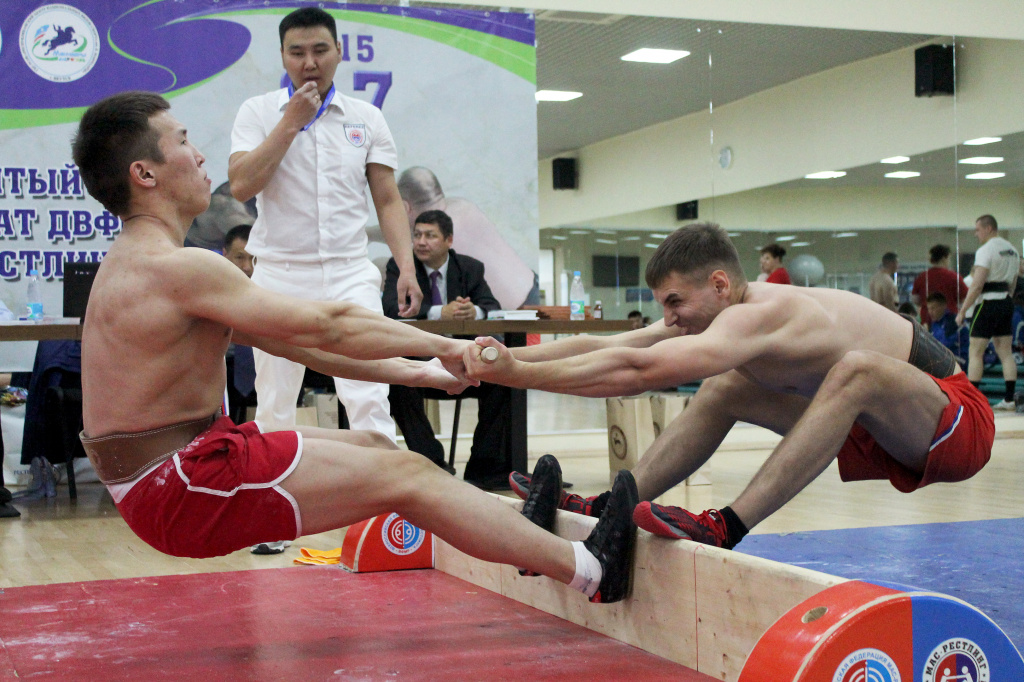 - When you are doing powerlifting, do not really think: there is a task from the coach, there is weight - you raise. And in mas-wrestling from the first seconds you need to think, plan tactics in advance, prepare receptions. My favorite method is to stand: first I give my opponent a slight lift, then I immediately turn off my legs and throw it over myself, leaving a stick in my hands, explains Ramig Nuruev.

A new platform for development

It's easiest to watch fights on mas wrestling at the Yakutsk Yysyakh festival, but for several years another place where we love mas wrestling is Primorye. During the Eastern Economic Forum, they hold a separate championship there - the Cup "Colmar". About hundred sportsmen from all over the world participate in competitions. On the platform even women come out. This year, representatives of China, Korea and Japan were invited to the tournament. Athletes from Europe, USA, Africa, India and Pakistan have already announced their participation.

- In China they are not actively engaged in mass wrestling yet, but when they saw it, they declared that it was their traditional sport. Americans and Azerbaijanis also say so. The Chinese in evidence brought images almost 13-th century, there are two people, too, pull the stick. But it's just like a mas-wrestling sport, "Ramig Nuruyev said.

With an eye to the Olympics

By mass-wrestling, they hold European and world championships. The competition was hosted by Georgia, Hungary, this year they will be held in Azerbaijan. Also pass and the stages of the World Cup. The first take the US. A fan of the Yakut wrestling and organizer of contests in the States has long been Arnold Schwarzenegger. The second stage is held in different countries, but the final one is traditionally held in Moscow.

- We have all the opportunities to make mas-wrestling an Olympic sport. It is necessary that it is officially registered in 70 countries. Now it is being developed in 47 states. I think that at this rate we will get an Olympic status for 2020, especially since the International Olympic Committee is very supportive of mas-wrestling, "said Ramig Nuruev. 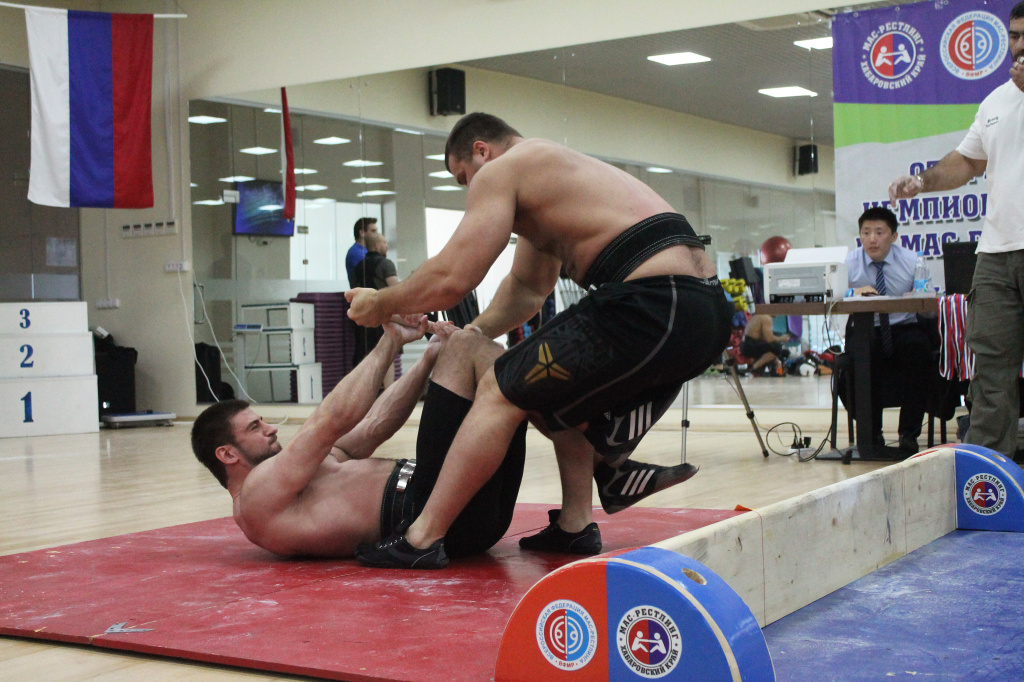 Laurels and skin for the winner

For wins in tournaments on mas-wrestling sportsmen receive valuable prizes. Usually it's money, cars, quad bikes and motorcycles. However, it can not do without national color. In some competitions a special prize is created - a wolf's hide.

Initially, mas-wrestling was an occupation for men, but gradually women were also introduced to it. Every year there are more of them. In this direction the West is leading - there are a lot of fans of contactless fighting in Chuvashia, but the palm of primacy is still found among Yakut women.

"They have it in their blood." In addition, women also want to show their strength. It is very interesting, when on the platform there are two strong rivals. They can hold a grip for two minutes. In men, such long fights are very rare, - said Ramig Nuruev.

As in any sport, there are always judges at the competitions. Now in Russia you can get a regional and all-Russian category. Two more people received an international category.