Deeper into the demographic pit

In early February, the Rosstat disclosed some macroeconomic indicators for the 2018 year in the context of federal districts. At the Far Eastern Federal District, at first glance, everything is not bad. Thus, the industrial production index for January-December was 104,4% - the industry grew faster than the average in Russia (the national average was 102,9%). The treasury is in the black: the revenues of the consolidated budgets of the subjects increased in January-November by 13,8% compared to 2017. However, demographic statistics are still depressing. EastRussia figured out whether the constantly growing economy helps to keep the population in the Far East. 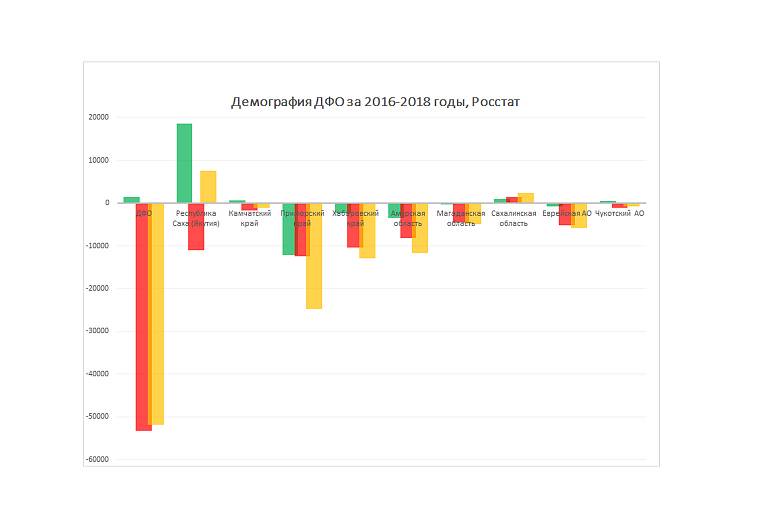 Photo: EastRussia calculations according to Rosstat

All state efforts to support business in the Far East, undertaken over the past few years, as EastRussia has repeatedly pointed out, are aimed at one, but global goal: people in the east of the country should become easier to live, and they should stop leaving. By 2020, the authorities promised to stabilize the population in the Far East, although it has been steadily falling since the middle of 90's: if 1991 million people lived here in 8, then only 2016 million remained to 6,2. True, President Vladimir Putin’s decision to join the Far Eastern Federal District in the autumn of 2018 of two regions, Buryatia and Trans-Baikal Territory, returned to the Far East in its new borders the population almost to 8,2 million inhabitants. But this, of course, cannot be called a solution to the problem.

In order to stop the outflow of the population, the state is investing heavily through the mechanisms of creating new jobs, stimulating business to build production. For this, in 2015-2016, the advanced development territories (ТОР) and the free port of Vladivostok (SPV) regimes were earned. In addition, with the 2017 of the year in the Far East, in its "points of growth" began the accelerated construction of social infrastructure: schools, hospitals, sports complexes, houses of culture. For this, from the state budget in three years, by 2020, 65,2 billion rubles will be spent. By the 2024 year, the head of state set the task; all the basic indicators of people's life in the Far East should exceed the average Russian.

The successes on industrial ground are impressive: by the end of 2018, 183 new enterprises were introduced in TOR and SPV, reported last week, Deputy Prime Minister Yuri Trutnev. Created, he said proudly, 27 thousand new jobs. On a scale of DFO losing, as already written by EastRussia, according to 15-20 thousand people of resident population per year, it is quite a lot. According to the logic of the authorities, it is exactly such business achievements that will be able to reverse the negative demographic trend in the Far East: receiving high-tech, well-paid jobs, the Far Eastern people will stop leaving. However, does it work? Obviously not.

According to Rosstat for January-November 2018 of the year (data for the whole year will be available only in March), for 11 months of last year, 331 424 people left the territory of the Far East. Arrived - 301 671 people. Thus, the migration loss was 29 753 people. Considering that the natural population decline in the new DFO boundaries for the same period was 93 people, the findings are extremely disappointing: for the incomplete 2018 year, the Far East has become even 30 thousand people less.

Ponder: for 2018, the business introduces almost 100 new enterprises of various sizes into TOR and SPV, attracts, according to Yury Trutnev’s calculations, the economy of the federal district 118 billion rubles. private investment. And people don't care, and they continue to give birth and leave less for a better life.

EastRussia analyzed the dynamics of the natural and migratory movement of the population in the DFO in its old boundaries. Statistical data confirms: despite the victorious reports of officials, increased benefits for the birth of children, free “Far Eastern hectares” and other support measures, with the population in the Far East everything is only getting worse.

Thus, in the 2016, the DFO was able to increase the population due to the excess of the birth rate over the death rate by 5,5 thousand people. The greatest contribution was made by Yakutia - there were born on 7,3 thousand people more than died. Unfortunately, the net migration outflow in the amount of 17,1 thousand people turned plus into a minus: the total outflow of the population was 12 thousand people. 2016 year, we recall, was the first year of active implementation of the "new economic policy" in the Far East: the first enterprises were commissioned, and trillions of future investments were promised to the residents of the Far East.

In 2017, everything seemed to be gradually starting to stabilize. But this was not the case: the picture with the natural movement of the population deteriorated in the DFO (instead of the increase there was a slight drop), and the migration balance still exceeded minus 17 thousand people. As a result, the Rosstat reported that the net losses in the population of the federal district also exceeded 17 thousand people.

Over the course of 2018, the migration outflow pattern changed several times, and by the end of November it became discouraging. The difference between arrivals and departures, as we mentioned above, is still in favor of the latter, and in the 9 subjects of the DFO in its previous boundaries, the migration balance went into minus for 22 thousand people. With the "increase" in the form of Buryatia and the Trans-Baikal Territory, the minus rose to 29 thousand. Of course, the December statistics may somewhat improve the picture, but the outflow into the inflow obviously does not turn.

In total, as calculated by EastRussia, in January 2016 - November 2018, the DFO in its former borders lost more than 51 thousand people of the permanent population. And this is despite the heroic efforts of Yakutia, which has provided 18,6 plus thousands of people during this time due to natural growth, and the successes of rich Sakhalin, where not only people were born more than died, but the migration balance over three years turned out to be plus 1,5 thousand . person.

It is probably very difficult for statesmen to understand what needs to be done to secure people in the Far East. It is not by chance that the officials even announced a collection of “popular opinions” from residents of the entire region for the formed national development program of the Far Eastern Federal District, which they will present to President Vladimir Putin at the Fifth Eastern Economic Forum in September 2019 of the year (EastRussia will tell you how they will gather soon).

The only answer to the question of how to make sure that people do not leave the Far East, the authorities do not cease to suggest, but they prefer not to hear these prompts. Last week, Deputy Prime Minister Yury Trutnev was asked from Magadan: “Would it not be fair for the state to create special conditions for those who live in the Far East since birth? What do you think is necessary to change in the approaches to the development of the FEFD, its social and demographic policy in relation to the indigenous people? "

The Ministry of Finance, of course, likes this answer, since it reflects the general position of the state on the inadmissibility of total benefits - in favor of point benefits. But Far Easterners, it seems, need just the opposite.