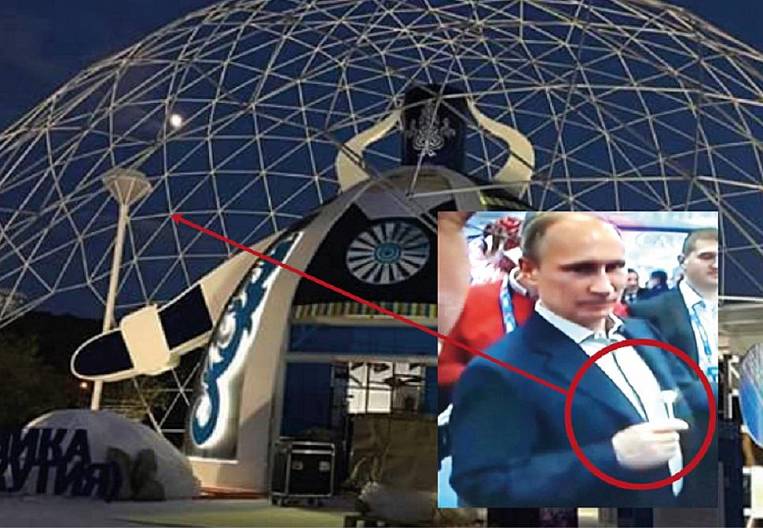 Photo: EastRussia
Today in Vladivostok on the eve of the Third Eastern Economic Forum the representatives of the administrative elite of the whole macroregion began to gather, therefore in the peripheral circles of the Far East only the forthcoming WEF is discussed. For example, they say that the corvette "Perfect", which arrived as an exhibit from the Khabarovsk Territory in the bay of Ajax, will salute from the guns in honor of the arrival on the Russian Island, the main site of the forum, the heads of state. Since there will be at least four of them - the heads of Russia, Japan, South Korea and Mongolia - volleys are expected to be at least four.

On the other hand, they say that the administration of the president is extremely unhappy with the appearance of the vessel in the water area, and the joint initiative of the Khabarovsk Territory and the Defense Ministry can be stopped even before Vladimir Putin appears on the island. According to rumors, one of the high-ranking officials of the AP, seeing the corvette during the inspection of the water area, said that "the forum is not a military exhibition". For Monday afternoon, the ship was still plying in Ajax.

Meanwhile, with Khabarovsk Territory and the ship there is another expectation, this time - the personnel character. All Far Eastern governors remember that Vyacheslav Shport, Governor of the Khabarovsk Territory, managed to invite President Vladimir Putin to the 70 Victory Hovercraft parked at the FEFU berth, a product of the Khabarovsk Shipyard. The head of the region and the head of the state then had an opportunity almost for a tete-a-tete, during which the prospects of development of shipbuilding were discussed, and Vyacheslav Shport then recalled this episode with particular pride more than once or twice.

The corvette located in the bay of Ajax could also become a place for a working meeting between the Governor of Khabarovsk and the President this year (if, let's remind, it is not ordered to be removed from the water area), which in some subjects of the Far Eastern Federal District is expected with tension. The meeting between Vyacheslav Shport and Vladimir Putin takes on special significance against the background of the possible shuffles in the Russian government over the past two weeks.

At the same time, the exposition of the DFO regions on the “Street of the Far East” on the VEF site and without the Khabarovsk corvette is full of significant exhibits.

So, an interesting art object is presented at the stand of Yakutia. Visitors to "Streets of the Far East" are wondering: what does the diamond on the pole, installed under the dome itself, mean? The answer is simple: in 2014, at the Sochi Olympics, representatives of the Yakut delegation presented Vladimir Putin with a diamond-shaped lollipop. The President was impressed by what he saw and even drew the attention of the head of the Olympic Committee to the fact that "we have in Yakutia" is the world's largest diamond mining company. It is not known whether the president will reach the republic's stand this year, so it may have been decided to simply erect a "monument" to that same candy, so that it could be seen from afar.

And on the inner sites of the WEF, the last preparations are being made for the opening of exhibition stands of ministries, companies and information partners. There are a lot of stands this year, they not only replaced most of the sites for free communication, but also clearly competed among themselves for profitable areas.

For example, the ALROSA stand, which struck the guests with its scale last year, occupying a good third of the hall in front of the congress areas, modestly hid this year at a far from passing through the 3 level of Corps A. It is said that the company declared itself on different sites, but did not fix it for a square. The last location was supposed to be at the 6 level of Building A, but from there ALROSU replaced the stand of the Ministry of Russian Color Industry. By this time, the free exhibition space the operator no longer exists.

Another rumor is connected with the peculiarity of the location of the institutions of development of the Far East at the exhibition. On the 6-m floor of building A, where the Ministry of Eastern Development, the Investment Promotion Agency, the Far East Development Corporation and the Human Capital Development Agency are located, there is no other institution - the Far East Development Fund. The fund is located separately, one floor below, behind the stand of PJSC Polyus. According to rumors, at one of the stages of preparation of the exhibition there was an attempt to put all the structures in a single line (as it was before). However, as a result, the ministry decided to distance itself from the Foundation, and he moved to the site, which he reserved for himself in advance in a favorable location at the 4 level.
Tags: gossip Vladimir Vladimirovich Putin Vyacheslav Shport Pole Yakutia Khabarovsk Krai