Irkutsk Region 07:08 4 billion rubles will be required for the resettlement of floaters in the Angara region
06:46 The human factor could cause an emergency with SSJ 100 in Domodedovo
More news
Media News2
HOME Regions Irkutsk Region 10.08.2017

Vihorevke money, but not warmly

Just a few plots that came to the office made me think about starting a new rubric. It will be called "The Collapse of the Year", and it will be a question of disastrous projects. On projects that literally devoured time, money, attention, but in fact turned out to be nothing. Unfortunately, the list of such stories in the Far East and the Baikal region is considerable. 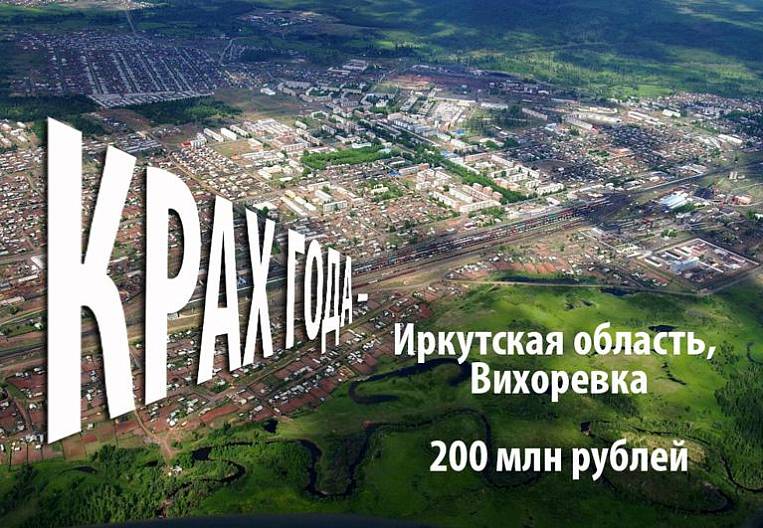 The main investment failure of 2017 in the Angara region can be considered investments in housing and utilities Vihorevki - a small city in the north of the region. The collapse of the year, these allocations are named not so much because 200 million rubles for a communal complex for 20 thousand residents - quite a lot, but also because, in fact, these funds were wasted. Even with the most favorable scenario for bringing the Vihorevka boiler house in order, it will take another hundred million rubles and at least three months of intensive work.

Problems in the communal complex Vihorevki began as early as 2014, when instead of the concession agreement with the winner of the competition, the mayor's office signed an agreement on transferring the boiler house to the free use of LLC Vikhorevskoye Management. The next heating season - 2015-2016 years - the management company ripped off. Then the contractor was replaced by the Krasnoyarsk company Teplovye Seti, but she could not cope with the Vikhorevka boiler house. In the winter of 2016-2017, the heating season in the city was not simply ripped off, the regional government had to enter the emergency mode in Vikhorevka. The latter allowed the regional authorities to urgently issue serious waste for coal for the boiler house and urgent repairs of equipment.

- The second winter in a row the townspeople sat in an embrace with the heaters, many uncovered the stoves that they had not used for more than ten years, switched to firewood, the children did not always attend lessons. We all family moved to my sister, because she had a stove. In general, it was overwintered like in the war, - says Svetlana Kireeva, a resident of the city. - It's a shame that all this was happening against the background of news that the region transferred money to the new boiler for us, then increased the amount for the purchase of coal, they say, so as not to save, a good one was bought, which does not damage the equipment.
Indeed, according to the estimates of the head of the Irkutsk region's government Alexander Bitarov (left the post of 5 August - EastRussia), about 125 million rubles was spent on the communal complex of Vikhorevka from the regional budget. These funds went for the purchase of new equipment, repair of the old and waste for the current work of the boiler house. In addition, according to the opinion of the deputy of the Vikhorev Duma Anzhelika Nazimova, the region spent 62 million rubles only for fuel.

"The cauldron may have put a new one, but he alone will not extend the entire boiler room when the other three are old." Therefore, it does not surprise me that eventually the new equipment went out of order. His change was not thought out, many expenses were made at random, - the deputy of the Vikhorevskaya Duma Pavel Zaineev admits. - I mean the expenses of the company "Vikhorevskoye management", with which the mayor's office, in the person of the head of the city Gennady Pulyaev, has entered into a contract for free use. The next contractor simply could not squeeze out anything from the complex, handed over to him in ruined form. Why in 2014 the mayor's office did not choose a normal manager for the competition and why the concession agreement was not immediately signed? I do not know, it was kind of like time.

According to other observers, it is not just about negligence or ignorance of laws, but deliberate violations of the law.

“Firstly, despite the majority of Pulyaev’s excuses, there was time for the competition, but instead of organizing it, the city administration transferred the communal resources of Vikhorevka to Oblzhilkomkhoz for a whole year, although it was already obvious that the organization was waiting for bankruptcy. It is no coincidence that each contract with the structure was concluded for only a month, and so the whole year. I am sure that the oblast government of that time was guilty of the Oblzhkomkhoz bankruptcy - at that time Sergey Yroshchenko was the governor. Why was this necessary? You see, communal resources - this is the most tasty morsel for all kinds of lovers of easy money. Indeed, in that year, from more than 400 municipalities of the region, an error similar to the one that occurred in Vikhorevka - I mean the contract of gratuitous use of a boiler room concluded with an incomprehensible office - was committed by 229 municipalities of Priangarie. What do you think is a coincidence? System error? Or the monetary scheme of cutting the industry, for which there was no proper control? After all, in the 2014 year, I appealed to the regional prosecutor's office with a statement about the illegality of the decision of the mayor of Pulyaev. At that moment, the department was on his side: no, they found violations, but minor, administrative ones. No corpus delicti was found in his actions. But now the prosecutor’s office of the passage does not give all the contractors who ventured to engage in the scandalous boiler room of our city, ”says Angelika Nazimova, a deputy to the Vikhorev Duma.

According to the opinion of the deputies interviewed, the new resource manager, who entered the Vihorevka municipal sector only on 1 July, had not yet got to the point, and the departments had already managed to organize several inspections.

- "Energosfera-Irkutsk" - the new boiler house manager - he did not even have time to look around, he was already tortured by inspections. Give you people at least a quarter to assess the available debris. There workers did not pay wages for several months. It seems that the prosecutor's office is trying to justify itself for the previous nonsense, - says Pavel Zaineev.

By the way, if the citizens do not doubt the guilt of the first private municipal manager, then in their assessment of the previous contractor - LLC "Teplovye seti" - their views differed.

- My opinion - the heating systems and the chance did not have to avoid the last breakdown of the heating season. After all, they were handed over a completely destroyed complex, boilers were broken, there was no coal reserve, workers were non-professionals hired for copecks, which actually broke the equipment, I am sure Pavel Zaineev. - And the Krasnoyarsk people in this industry worked before, they were experienced in the management of the municipal industry. And the contract with them was no longer enslaving for the city, and by law - a concession agreement.

Nazimova, on the contrary, proposes to look at the details of the above-mentioned agreement in order to be sure of its non-winning for the city.

- This contract was concluded (by the way, protested in court) for 15 years. Of these, the first five years, the contractor company is spared from any investment in the communal area of ​​the city. Although according to the classics of such contracts, infusions should go simultaneously from three sides - the oblast, the city budget and the contractor, the resource manager. That is, for Vihorevka this agreement was not as useful as it is customary to think, "argues Nazimova. "But, of course, this agreement does not compare with what was concluded with the" Vikhorevsky management. " But the last resources of the city simply plundered, as well as investments from the region and the city into the complex. And under the terms of the contract of gratuitous use somehow punish the guilty is not possible. I think this circuit is not even the Puliaev organized, and not his friend Kasyanov (Sergey Kasyanov, the former head of "Vihorevsky management", until recently the acting head Vihorevka after removal from the post of governor Gennadiya Pulyaeva Levchenko - EastRussia.): Traces lead to the city of Tulun, and from there to the leaders of the Irkutsk branch of the party of power. It is no coincidence, the head of the IRO "United Russia", Chairman of the Legislative Assembly of the Irkutsk region Sergey Brilka vihorevchan all attempts to draw attention to the crisis in housing and communal services of the city did not respond, and preferred silence situation.

At the time of writing, EastRussia was unable to contact Gennady Pulyaev and Sergei Kasyanov: Pulyayev did not pick up the phone, Kasyanov's phone was disconnected. However, these arguments were indirectly confirmed by the recent chairman of the regional government, Alexander Bitarov, who stated that the invested area in the Vikhorevka housing estate was 125 million rubles, "somebody has very skillfully mastered". "Thirst for blood? The minister does not exist, the deputy minister who oversaw the boiler-houses, no, the first deputy minister does not exist ... The final conclusions will be made after the investigation of the case is completed. But it is obvious that even if half of the above is to be invested in the boiler room, it should work like a clock, and we patch all four boilers in turn, "the official said.

In turn, after the publication of the decision of the Governor of the Irkutsk region Sergei Levchenko from 10 May 2017 year to dismiss the head of the Vikhorevsky urban settlement Gennady Pulyayev, the head of the region explained that it was "caused by years of lack of solutions to problems in the municipal economy of the city." "For a number of years in Vikhorevka, the heating season is in danger of failure. In winter, 2016-2017 years, an emergency regime was introduced on the territory due to poor-quality preparation of the heat source, despite sufficient funding from the regional budget. During the winter months, four boilers went out of service every day, "the governor's press service quoted the Irkutsk region government as saying.
Tags: Irkutsk Region Vihorevka Housing and utilities the collapse of the year project investments