RES is no longer an end in itself 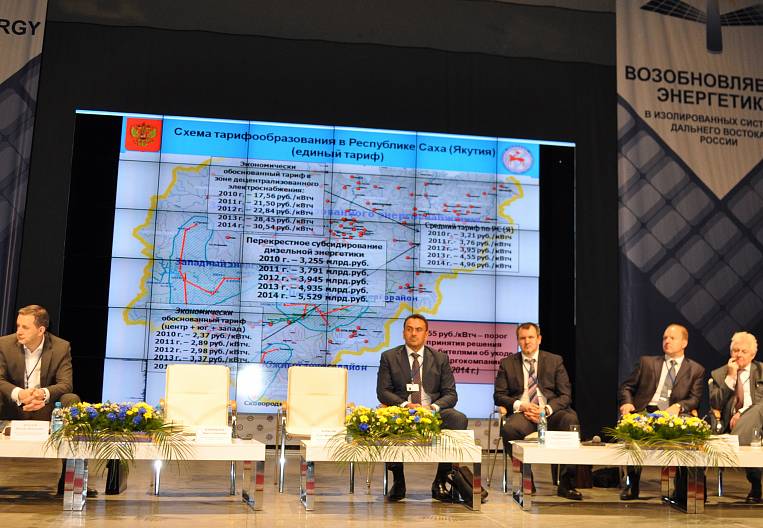 If last year the conference participants talked about the use of "green" energy from a theoretical point of view and got to know each other more, then this year the practical application of renewable energy technologies and discussion of specific initiatives were at the forefront.

More than 250 representatives from different regions of Russia and a number of foreign countries came to Yakutsk to share experience in implementing renewable energy projects, discuss problems and develop joint solutions. The two-day event was attended not only by domestic energy leaders, but also by a number of foreign specialists: IFC Program Manager for the Development of Renewable Energy in Russia Patrick Willems, Director of Engineering Solutions Northern Power Systems Alan Axworthy, Senior Sales Manager for Eastern Europe SMA Jan Stottko, Director for International Projects Ekwadraat BV Mark van Seventer, Director of Renewable Energy Sources KOMAIHALTEC Inc. Emi Komai. At the conference, even foreign colleagues noted that Russia has achieved significant results in the field of renewable energy for a year and can serve as an example for other countries.

The main feature of the conference was the focus on the practical side of the implementation of renewable energy projects in the Russian Far East, on the discussion of specific projects. Thanks to the serious attention from the administrations of the Far Eastern regions, the conference has become fully interregional. And given the bright speeches of the representatives of the authorities of the Trans-Baikal Territory and the Irkutsk Region - Andrey Bort and Sergey Malinkin - it even went beyond the Far Eastern Federal District.

Sergey Tolstoguzov, General Director of JSC "RAO Energy Systems of the East" stressed that "if a few years ago, renewable energy was exotic, which provided opportunities for growth, it was really an interesting professional shift in the energy sector, but today it is an economically viable interesting project."

“At the same time, it should be noted that we all stand on the threshold of major serious projects within the framework of renewable energy, our main task is to build up typical technological solutions, how we will apply them, technologically join together - diesel, sun, wind, energy storage ", - he said.

According to S.Tolstoguzov, another major problem is "ensuring the return of investments, the adoption of those or decisions that would allow for the return of investments while maintaining balance sheet decisions and at the same time lead to a reduction in tariff growth and, perhaps, to a decrease in tariffs. This is a serious layer of work, which will have to work on. " He particularly noted that small, timid steps in this direction have been made.

“This year several wind stations appeared. A number of agreements were signed with Japanese colleagues, where we use Japanese money to install equipment in the Far East. A number of agreements with our Chinese colleagues on the supply of equipment and technology. There are very good developments with our domestic company RUSNANO - a whole set of agreements in terms of energy converters, solar energy, and composite materials for wind generation. These are our enterprises that will actually participate in this direction. Serious conditions are created in Yakutia and Kamchatka for the development of renewable energy sources and its payback, ”summed up S. Tolstoguz.

Aleksey Kaplun, Deputy General Director for Strategy and Investments of JSC "RAO Energy Systems of the East", spoke about the features of renewable energy projects in the decentralized regions of the Far Eastern Federal District.

"What is specific? The relatively small capacity of each individual system - from 50 kW to 12 MW and low power system loads - from 15 KW to 6 MW. As soon as we plan to supply more or less serious capacity of renewable energy - for example, about 20% of the total load of the power system, we already have a problem with ensuring the reliability of the power system and its interface with the main energy source, "he said.

“And even in Europe there are no countries that would switch to renewable energy at 100 percent. It is appropriate to imagine that each of our separate small village - one isolated system - as one mini-country. If from the point of view of renewable energy, Europe considers the best achievement of 20-30% of the total generation level, according to our projects, where each village is a separate power system, in relative terms this figure is exceeded, ”he expressed his point of view. In the villages where the RES project will be implemented, the relative ratio will be higher than 20-30%. In our specificity, we are faced with more than double redundancy of power, ”A. Kaplun noted.

Another important feature of Russia is the natural and climatic conditions on which the installation of renewable energy systems also depends. Such systems should be launched not only in the regions at -60 (in Yakutia), but also in the warm south of Primorye, in Kamchatka with its winds, and also in Sakhalin. All territories are diverse, but in all there is a certain potential for renewable energy.

"In this sense, we are very scrupulous about the selection of equipment and construction solutions that we are going to use. This, of course, affects the cost of our projects. Thus, the presence or absence of permafrost already affects the application of certain fundamental decisions. If in Europe a part of the equipment can be supplied in open execution, in our region it is only closed ", A. Kaplun continued the story about the approach of" RAO ES of the East "to the implementation of renewable energy projects in the Far Eastern Federal District.

"The talk of the town", according to A. Kaplun, is logistics. "We are carrying diesel fuel 2-2,5 year. As a matter of fact, we will conduct the equipment to these places from year to year, and with re-packing, "he said. That is why the Russian energy sector should understand that they have a limited construction period.

"We have settlements where you can physically get three days a year. All these are the main distinctive features. At the same time, it is the high cost of diesel fuel, the rather serious deterioration of equipment and the availability of natural potential that make our products economically recoupable by saving on resources, "A. Kaplun confessed.

Practically all the speakers at the conference talked about the need for a regulatory framework, long-term tariffs, as well as guarantees of fuel economy for a payback period, optimal technical solutions. Thus, RAO Energy Systems of the East signs agreements on joint financing of projects - with Primorye, Kamchatka, Yakutia, organizes financing schemes when it comes to the company's own funds. Various financing options have led to the creation of a comprehensive program for the development of renewable energy.

"As for the technologies: we decided that we need polycrystalline modules in the sun, as far as inverters are concerned - we need transformerless inverters with MPRT technology, and lead-acid gel batteries are also technologies that we will develop here in the Far East. As for the power of windmills, it should be small windmills that can be transported, "A. Kaplun said. In total, according to him, developed the order of 176 projects, in which it is necessary to invest a minimum of 11 billion rubles of investment.

Today, “RES for us is not an end in itself”: we are talking about the reconstruction of the existing diesel power station. As part of the reconstruction of the entire complex, an integrated phased approach is needed. At the first stage, the facility is being installed - a solar or wind power station mated to an existing diesel station. At the second and third stages - work related to the reconstruction of diesel stations. And of course, system funding is required. Today, as A.Kaplun noted, it is no longer important where to find the money, but how to build the work correctly. Give preference to developments from the countries of the Asia-Pacific region — Japanese or Korean partners — or switch to a western investor, or cooperate with RUSNANO, where serious potential is concentrated.

"As soon as we systematically and massively begin to develop RES, it will take work and service centers and production centers, logistics, we will find our official suppliers. Then it will be a system. The general system for the implementation of renewable energy projects in the Far East, "A. Kaplun shared.

Egor Grinkevich, Deputy Director of the Department for the Development of the Electric Power Industry of the Ministry of Energy of the Russian Federation, spoke about the state policy of interest to all of the isolated energy systems. He said that the Ministry of Energy approved the order on the procedure and procedure for compensation of the cost of technological connection. This order provides for up to 50% compensation for the cost of technological connection of renewable energy facilities, within 30 million rubles for each facility. This order was approved last year and this year may be included in the work.

Speaking about the new generation power systems, Mikhail Kozlov, Director for Innovation and Renewable Energy of JSC RusHydro, said that "we do not have the task of making energy systems from 100% of renewable energy sources, we have the task of making them with the optimal ratio of traditional sources of energy and RES." He also stressed the role of domestic developments, which are developed taking into account the Russian conditions.

"Do not forget that in any country there are interesting developments, and in Russia, even more so, and there are many of them. The simplest way is to follow the example of Skolkovo or other development institutions, the same Russian venture company. They finance a number of extremely interesting technologies in the energy sector, some of them either have no analogues at all, or they follow the same path as in other countries, "Kozlov said.

The opinions of key experts on RES projects in isolated systems (Kamchatka, Primorsky Krai), on infrastructure development, and on breakthrough solutions in the field of renewable energy, can be found on the EastRussia.ru portal in the section "Opinions".