The Trans-Baikal Territory annually falls into anti-ratings due to the failure to complete the program for relocation from dilapidated and dilapidated housing. The issue is still on the agenda, because until now they are resettling houses that were declared damaged before 1 on January 2012. 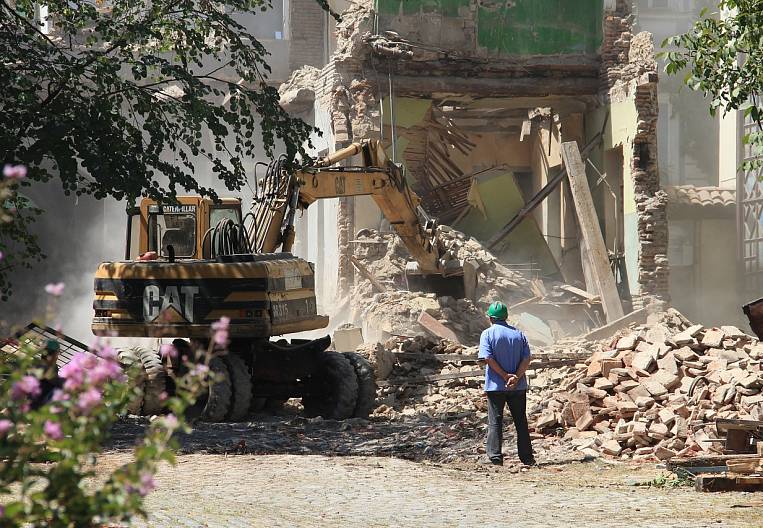 Recently, the Minister of Construction, Road Facilities and Transport of the Trans-Baikal Territory Alexey Goncharov said that the authorities of the region “failed” the program for relocation from dilapidated and dilapidated housing. He said that the ministry is completing the first home relocation program, which was declared emergency until 1 on January 2012. On it you need to settle 83 thousand square meters. meters. Now it remains to resettle five thousand square meters. meters - about 100 families.

“Auctions have already been held on 78, most of which have already been awarded contracts, the rest is undergoing a conclusion process, procurement is being carried out on seven dwellings, decisions on the resettlement method are being made on 15,” said Alexey Goncharov.

The second program is for homes recognized as emergency before 2017. You need to resettle them by the 2025 year. This year it is necessary to resettle 850 square. meters of housing.

“At present, state contracts have been concluded for ten residential premises, and auction procedures are being conducted for six. In addition, we plan to purchase residential premises from developers in the constructed apartment buildings for a resettlement area in the amount of 476 sq. meters, ”the minister said.

In 2020-2021 years Transbaikalia needs to settle about 12 thousand square meters. meters of emergency housing. Now the authorities of the region set the task of resettling everyone by the 2026 year, including residents of houses that have not yet been recognized as emergency. Work in this direction is being conducted with the federal Ministry of Construction.

Even with the third governor in Transbaikalia, they decided not to build housing for immigrants on the ground, but to buy and build mainly in Chita. This would help to support the builders and promptly provide new square meters for the settlers. meters. Then in the 2016 year it was planned to relocate all the emergency housing before the 2017 year, but this did not happen.

In February of this year, an apartment building built in accordance with the program for immigrants in Chita was declared unsuitable for living - it began to burst at the seams due to the release of groundwater. The state inspection ordered to preserve the house. For the construction of the program then paid more than 146 million rubles. Recently, the head of the regional Ministry of Construction announced that for residents they will buy apartments in the secondary market.

According to him, another problem of unresolved resettlement in the region is the cost of sq. meter of housing. However, recently the Minister of Construction and Housing and Public Utilities of Russia Vladimir Yakushev signed an order under which Trans-Baikal the average market value of one square meter. meters of housing increased by 37%.

“For the fourth quarter of this year, the region has set an indicator of 55 568 rubles. For comparison, in the last quarter this indicator was 40 486 rubles. An increase of almost 37%. The issue of increasing the cost of square. meters of housing to the average market for several years and raised the authorities of the region, and builders. Indeed, it is this indicator that is used to calculate the size of social benefits for people whose housing is purchased at the expense of the state. These are orphans, displaced people from emergency housing, who suffered during the emergency, ”explained Alexey Goncharov.

In the first quarter of this year in Transbaikalia, the average market value of one square meter. meter of housing was 39 057 rubles, in the second - 38 297 rubles, for the third quarter the indicator was equal to 40 486 rubles.

In turn, the deputy of the legislative assembly, builder Alexander Filonich, two years ago, stated that the minimum price per square meter. meter for Transbaikalia should be at least 52 thousand rubles. According to him, today the construction industry could be supported by state orders, but they are all connected with co-financing, which the regional authorities do not have.

While officials are looking for the root of the problem, people continue to live in shabby houses. So, the house of Valentina Kuznetsova from Art. The blast furnace was declared emergency five years ago.

“We live and are afraid that the roof is about to collapse. Well, if during the day when everything is at work ... ”, complains Valentina Kuznetsova.

Three years ago, the court decided to provide housing in exchange for the emergency, but the administration of the Chita district does not comply with it. The head of the district suggested that the woman move to Atamanovka, where an apartment building is being built under the "Shabby Housing" program, but the matter did not come to practical steps. The situation is aggravated by the fact that some of the mandatory documents that the Kuznetsov submitted to the municipality have been lost.

Residents on Taezhnaya Street in Chita were stuck in the beginning of the last century along with their homes. The old, rotten barracks only outwardly seem strong. The tenants themselves knocked them off and painted them. But in reality, they say, everything is falling. There is no water, the only water pump on Frunze Street freezes over in winter. They go to the bathhouse or to friends in comfortable apartments to wash. Almost 18 people live in 400 barracks. But only three houses were recognized as emergency.

While still acting governor of the Trans-Baikal Territory, Alexander Osipov promised to resolve the issue with these barracks.

In September, at the Eastern Economic Forum in Vladivostok, the head of the Trans-Baikal Territory, Alexander Osipov, and the Director General of the Housing and Utilities Reform Support Fund, Konstantin Tsitsin, signed an additional agreement to the previously concluded agreement on financial support for the resettlement of citizens from emergency housing. The document assumes the allocation of 856,8 million rubles for 2019-2021 years.

The Director General of the Fund noted that in order to solve the problem Transbaikalia needs about 4,5 billion rubles. At the same time, four billion of this amount will be provided by the Fund.

Earlier, the Russian government signed a decree on the allocation of subsidies to the regions for the implementation of the program of relocation from emergency housing for 2019-2021 years. According to the document, the Trans-Baikal Territory will receive almost 217 million rubles. During this time, about 13 thousand square meters should be resettled in the region. meters of unfit housing.

Now, in a number of areas of Transbaikalia, the program for relocation from dilapidated and emergency housing has been completed. So, in the Petrovsk-Zabaykalsky district in Tarbagatay, Khokhotuy, Tolbaga and Novopavlovka, the issue with immigrants was completely closed last year. According to the head of the Novopavlovskoye urban settlement, Olga Ioninskaya, there were 19 families living in emergency housing in the settlement, 17 of them bought housing in Chita with money allocated by the state, and a house was built in Novopavlovka for two families.