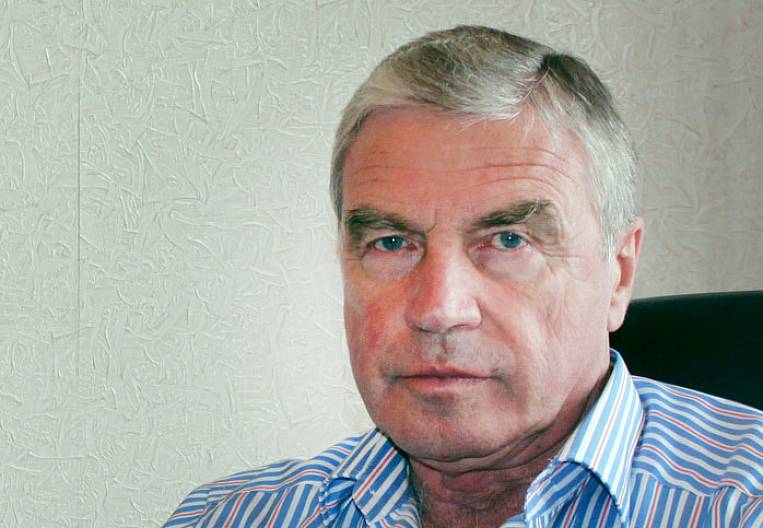 All production issues, namely the preparation, manufacture and shipment of products that the branch of "UDP No. 723" Dalspetsstroi is supervised by the deputy production chief Viktor Markovich Chesnokov


Viktor Markovich is not one of those chiefs who are exclusively engaged in paperwork. Often, it can be seen in the production department, where he looks, whether the formwork is properly made, how the product is cast. "Our work is responsible, difficult, but also interesting. It's difficult to make a new product, but when it works out, you get immense moral satisfaction. It is impossible to overestimate the labor of workers and engineers. The entire economy of the enterprise as a result depends on the realized cubic meter of reinforced concrete products, "Viktor Markovich explains.

He knows his business from "A" to "I". Victor Markovich has been working for half a century on improving the quality of reinforced concrete structures. Such specialists can be found only at enterprises with a rich history and a developed, powerful production infrastructure. For the faithfulness of the profession, his colleagues nicknamed him "a veteran of reinforced concrete."

He began his career as a master. In 1968, he got a job at the JBI-1 plant (in 2000, "Dashspetstroi's subsidiary production department No.1" was created on the basis of the plant). Through 20 years, Chesnokov was already the director of the largest reinforced concrete factory in the Far East. And after the restructuring, when the factory was disbanded, began working in Dalspetsstroy.

Victor Markovich is sure that when working with such material as reinforced concrete, there is a place for creativity. He repeatedly became the author of new samples of products. So, invented by him in the 2000-ies, the block garage is still in demand today. Based on the popular consumer goods this year, reinforced concrete blocks of the power substation were constructed. Products in something unique. A complex two-piece product is not produced by any enterprise in the Far East and Siberia.

"In order to create something new, one must know the technology of production well. One knowledge attracts the other, with experience the possibilities are being expanded and it turns out that we are creating a new product from the basic designs, "Chesnokov shares his experience.

When the construction of the cosmodrome began, the whole life of the enterprise changed. The branch has mastered the production of new products, and in order to exclude transportation costs, in the territory of Vostochny, they opened two sites for the production of valves and metal products.

From year to year, the quality of the components of the concrete mix improves. Today, the branches of the branch produce high-strength concrete, "enriched" with additives, providing frost resistance, strength and waterproofness. From these components, various types of concrete rings were created, necessary for the construction of water supply systems, storm water wells and wells for servicing pipelines at the Vostochny Space Center.

Under the leadership of Viktor Markovich, the manufacture of a new type of reinforced concrete products - rings of wells in individual formwork began. It is not without pride that he recalls how the Eastern branch of the "UPP # 723" supplied the necessary products.

The development of the industry was held in front of Viktor Markovich. "The technology of production of the concrete mix is ​​being improved, because electronics has come to the aid of engineers. In a concrete mixing plant, the process of preparing a concrete mix is ​​controlled by a computer that monitors the dosing of the components of the concrete mix and issues a command to the dispensers and concrete mixers to perform the operations. In molding shops, an automated control system for heat and moisture treatment of reinforced concrete products in steam chambers and cassettes has been introduced and is being used. Now we get high-quality concrete, the composition of which at 100% corresponds to the requirements and applications. "

Such waterproof concrete with frost-resistant additives will be used in the manufacture of shore protection panels and thrust blocks. In August, the branch received a large order for the manufacture of special structures to be used in the construction of a dam in Khabarovsk. “We have already begun to mold quite complex shore protection products. There are high demands on their quality, as they will be in the water and must withstand heavy loads. ” Chesnokov, as before, is not an advanced production process, so you can be sure that the manufacture of special structures in reliable hands.

Chesnokov Victor Markovich was awarded the title of "Honorary builder of Russia" for his long and fruitful work, his great personal contribution to the development of the construction industry in the Far East. He has the Honorary Diplomas of the Khabarovsk Krai Administration, departmental letters.