In a controlled fog 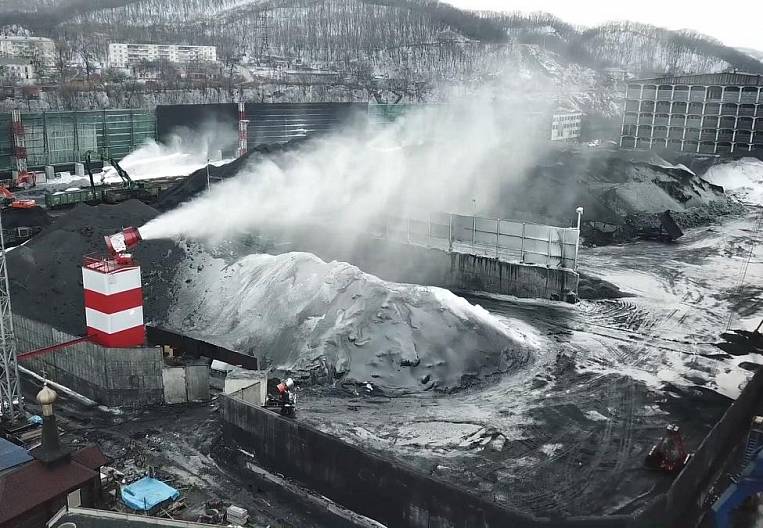 The biggest installation in the Far East with a coverage range of more than 150 meters is equipped with its own weather station and corrects the work taking into account the direction of the wind.
Alexey Makarov, Rita Podkorytova and Andrey Kuznetsov, deputies of the Nakhodka City Council, visited the presentation of the new dust suppression system at the Astafiev Terminal. The executive director of the company, Alexander Ganin, demonstrated the work of the new water cannon and spoke about the measures taken at the terminal over the past year for dust suppression.
The water gun has a high dust suppression effect, which is achieved thanks to a large number of powerful injectors. In summer, it generates a water mist, and in winter it creates a snow cover.

"This is one of the most powerful installations in the Far East, consumes 270 liters of water per minute and independently adjusts the direction of the jet based on the wind rose. "Astafiev Terminal" in early February concluded an agreement with the governor of the Primorsky Territory, which provides for strengthening dust suppression measures and the construction of closed dome structures and additional dust-collecting barriers. Today we agreed with representatives of the deputy corps of Nakhodka that the public and people's representatives will monitor the progress of our program and will support us in resolving a number of administrative issues, "said Alexander Ganin, executive director of Astafiev Terminal.

They inject a dense, finely dispersed mist that wets the suspended dust particles and settles them. In winter, the installation operates in the mode of spraying snow, which, like water particles, precipitates coal dust, forming a dense snow blanket on the surface. Representatives of the Nakhodka deputy corps got acquainted with the project for the construction of a protective dome over the terminal territory and agreed on further cooperation with the company's management.

"We came to check how the implementation of the Astafiev Terminal's agreement with the Primorsky Territory Administration is proceeding. It can be seen that considerable funds have been spent to purchase new equipment, but it is important that these measures are really effective and could radically change the situation in the neighborhood for the better. Today we have agreed with the leadership of the Astafiev Terminal that we will be provided with more detailed plans and projects for the transition to a closed transshipment type and we, for our part, will monitor the implementation of this program, "MP Rita Podkorytova stressed.