The first house under the federal program "Housing for Russian families" LLC "Oriental LUCH" (authorized capital - 15 million rubles) was transferred in December 2017 year. Documents and keys from the apartments on the street. Neibut, 137 in Vladivostok tenants received before the New Year. Some families stopped on the same day. The cost per square meter of housing was only 35 thousand rubles. Few people believed that the developer would be able to erect a house and put it into operation on a tight schedule - in just a year. 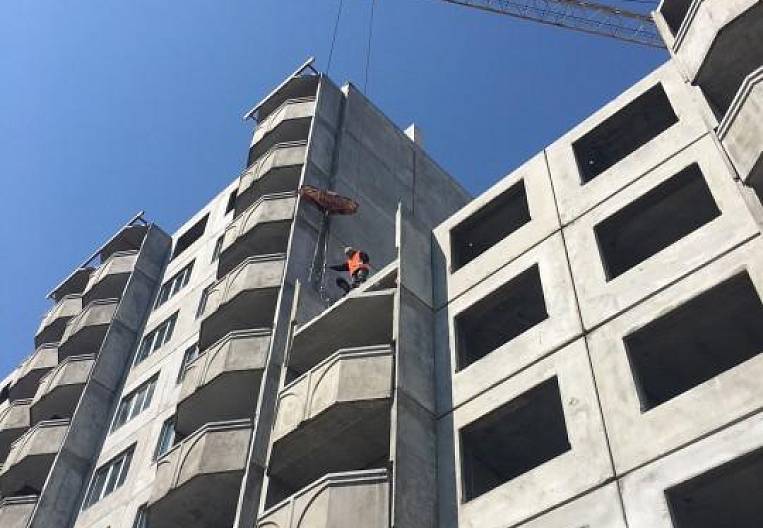 Photo: courtesy of Vostochny LuCH LLC
"Everyone thought that this was impossible, because we had exactly one year left before the completion of the presidential program" Housing for the Russian Family. " It was closed in December 2017 year. In December 2016, we went to the site, and in December 2017, the first tenants arrived. I emphasize, this is a big house, 192 apartments, six entrances, nine floors. All communications, heating, sewerage, hot and cold water - everything was connected. A service management company has already been established. In this first house we bought land for our money, built networks, built houses and gave people the opportunity to buy inexpensive apartments, - said Aleksey Isakov, Deputy Development Director of Vostochny LuCH LLC.

Future tenants for the first in Primorye "software" house selected a regional operator - the administration of Primorsky Krai. To claim for inexpensive "squares" could be incomplete, large families, people with health restrictions - only 16 categories of citizens. 4000 approved participants purchased apartments on a first-come-first-served basis, sales were closed in one day.

The rapid development of entrepreneurship in Primorye is promoted by the preferences of the Vladivostok Free Port law, among which zero rate of profit tax for the first five years of work, reduced rates of social taxes - 7,6 instead of 30%.

- The preferences for the residents of St. Petersburg significantly help to raise and untwist the company, as well as to pay employees only a white salary. This allows you to reduce the cost per square meter of housing for buyers. One of the big advantages of the SPV regime is the opportunity to receive administrative and methodological support, "says Igor Dulnev, the head of OOO" Vostochny LuCH ".

Now "East Ray" is building the second house of the third house, they do not belong to the program "Housing for Russian families". The second house of the resident of St. Petersburg plans to hand over 2018 at the end of June, the third one in August, then the first stage will be commissioned, investments of which amounted to 1,4 billion rubles, and a grand opening of a new microdistrict of three 9-storeyed houses with a total area of ​​36 thousand will be held. sq. m. m. Housewarming will mark 576 of maritime families. The first floors will be given for social facilities: pharmacies, children's institutions, shops, offices. The other day, the administration of the Primorsky Territory agreed on the name of the new street - "Green Boulevard". This will be the first boulevard in Vladivostok, which is famous for its elevations and a comparative landscape, and one of the few microdistricts of the city with a green zone.

- The second and third houses of the first stage are commercial, but we sell apartments at the price of 50-60 thousand rubles for 1 m² of finished housing and for 40 thousand rubles when buying at an early stage of construction, whereas the usual cost in new buildings in the capital of Primorsky Krai - 70-90 thousand rubles for the "square", - adds Alexei Isakov, Deputy Director for Development of OOO Vostochny LuCH. - We offer prices one and a half to two times lower than market prices and are looking for options for compensation, so that there is marginality. I'll tell you about a small "revolution": we have one of the few construction projects in Primorye, where in real time you can To monitor the progress of work with video cameras.

Tracking the very fact of doing work on time and number of people is important to count the hour of work. At the initial stage, we worked and debugged this system, now it allows us to save on the construction of 10-15%. No one steals from the building materials, and so on. In addition, at our construction sites all fenced, which excludes the penetration of strangers. First we installed 3 web cameras, now they are already 12, 2 megapixel resolution, all the details are clearly visible. Chambers allow not only to conduct public control, but also to monitor the progress of construction. This has a positive effect on communication with interest holders, contractors and insurance companies. Previously, some people asked us for photo reports from the sites, now they go to our site independently and watch the construction work in real time. The same goes for inspectors, who do not need to spend much time on construction now.

Want to build the construction of transparency wanted and colleagues of the "Eastern Ray" - the tracking system is being implemented at several construction sites in Primorye. Until summer, the SPV resident plans to equip the territory with new buildings, pave roads and roads, install sports and playgrounds, build a parking lot, plant trees. After the delivery of the first stage, "Oriental Ray" will pass to the second one, and will be engaged in monolithic housing construction. In Vladivostok, "several 17-storey" candles "will grow, apartments in which will also be sold in the" economy "segment.

Published in the journal "Economics of the Far East"
You can subscribe to the magazine on the portal investvostok.ru
Tags: investments building housing free port Vladivostok
January 23: current information on coronavirus in the Far East
Digest of regional events and latest statistics
Media News2
See also: