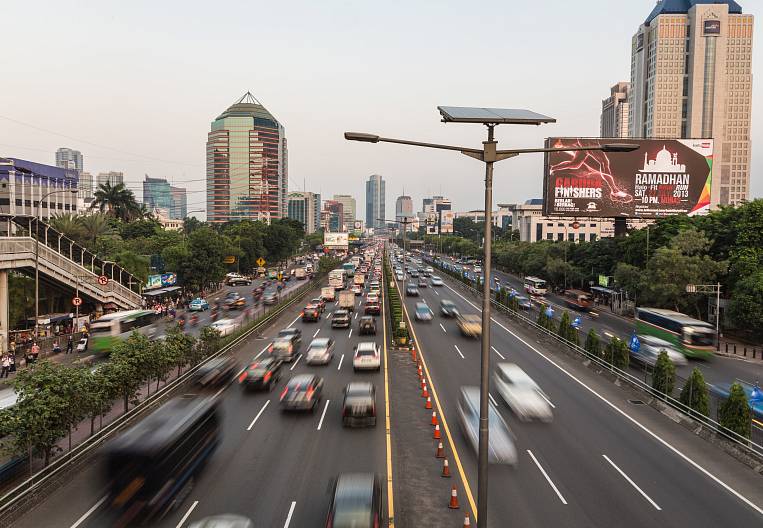 A large number of companies operating in the country are forced to struggle against the obstacles created by the lack of a well-developed and efficient industrial infrastructure.

The work at the Toyota plant in Jakarta is constantly hampered by traffic difficulties. According to one of the company's managers, the road to the port (about 50 kilometers) takes two and a half hours. He also believes that in the next five years this time may increase to nine hours and there is a possibility that infrastructure problems could lead to serious production downturns.

Sales of new cars in Indonesia over the past decade have tripled. The number of cars in the country's capital is growing at 10% each year. However, the total throughput of roads has remained virtually unchanged, according to officials of the Ministry of Transport. The average speed of transport in Jakarta is 10 km / h due to constant difficulties on the roads.

Indonesia ranked 53rd in a World Bank study on transport infrastructure efficiency. For comparison, Thailand was ranked 35th and Malaysia 25th. Under the leadership of outgoing President Susilo Bambang Yudhoyono, Indonesia's economy has shown steady growth over the past decade. During this period, the country's GDP grew by 80 percent. However, the infrastructure needed for the economy to function, especially road networks, has not been improved to keep pace with the speed of development.

President-elect Yoko Vidodo assured that the administrative efforts and budget funds for the construction of roads, airports and ports will be increased. Whether Indonesia is able to create the necessary infrastructure quickly enough depends on the degree of interest of the new presidential administration in political and budgetary reforms.

For example, it is necessary to substantially cut state subsidies in a large number of industries, in particular, in the fuel sector. These subsidies at the moment are up to 20 percent of government spending. Significant damage to public infrastructure projects was also caused by corruption, related to various permits and licensing.

Vidodo will have to demonstrate his leadership in order to prevent the blocking of the reforms necessary for continued economic growth from the group of entrepreneurs. The main concern about the actions of the new administration in the framework of economic policy is the apparent inclination of the future president to protectionism, which will keep the economy from further opening to foreign investment and a competitive market.

During the presidential debate held in mid-June in Jakarta, Vidodo voiced protectionist views during the discussion of the economic union of the member countries of the Association of Southeast Asian Nations planned for the end of the 2015 year. He noted that Indonesia undoubtedly needs to keep certain barriers to foreign business, which plans to enter the market, and promised to create advantages for domestic companies in the field of government approvals and permits for their business.

A new administration is expected to maintain a controversial ban on the export of unprocessed ore, which was introduced by Widodo's predecessor. The protectionist rhetoric of the new president revives concerns about the international competitiveness of Indonesian industry. Data that confirms these concerns is sufficient.

The ministry responsible for the country's industry recently issued a report on exports from Indonesia, which included 4000 product categories. According to the report, 69 percent of Indonesian products are not competitive in the Asian market. A major ministry official said that the economic efficiency of many industries in Indonesian industry is low due to severe dependence on imported materials and fuel.

Mineral and oil resources at the moment are half the cost of total exports. This percentage has been increasing steadily since 2002, when it was 30%. The Indonesian economy became increasingly dependent on natural resources, while the manufacturing industry, which was internationally competitive, simply did not appear.

In Indonesia, since the 2012 year, there is a shortage of both tax and current accounts. If the country continues to stimulate domestic demand with subsidies and does not increase exports, the economy will remain dependent on foreign capital - primarily in the area of ​​its growth. The situation will inevitably create a risk that the country's currency will become a target for Forex speculators.

About half of the 250 million population of Indonesia, the largest among the ASEAN countries, are in the "up to 30" age category. This means that the country will still be able to benefit from the demographic situation, having a large percentage of people who are aged, suitable for work until about 2030 year. For the first time, Indonesia ranked first in the list of countries most attractive for investment, which was the Japanese Bank for International Cooperation in 2013.

However, a country may lose the chance that the demographic “window” gives it if it does not take effective steps to cope with the many structural and political challenges that exist in its economy. Obviously, the Indonesian government must do to spur economic growth. It is necessary to develop industrial infrastructure, while at the same time taking measures to relax the prohibitions, thereby attracting foreign capital.

The question is whether the Vidodo administration has the political will necessary to go through the painful reforms that are necessary to achieve political and economic goals.

ps At the moment, Widodo’s victory in the elections has been protested in court, but sources say that the chance of satisfying the appeal is small - EastRussia.ru