The Russian economy occupies a strong position of one of the leaders of the global energy market: the first place in the world in terms of oil production, the fourth - in electricity generation, the sixth - in coal mining. A significant part of the resources goes for export, in particular, over the past year, Russian companies exported more than 190 million tons of coal to foreign markets. The key direction of export supplies are the countries of the Asia-Pacific region, and one of the priorities is the modernization of transport and port infrastructure in the Far East. Large state and private investments aimed at improving the network of roads and cross-border crossings came to the region, the most important of which are the Far Eastern ports - the "windows" to the APR countries. 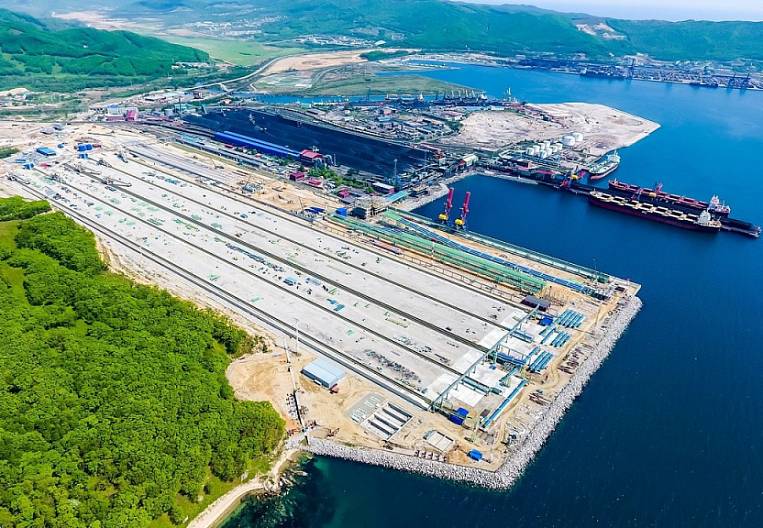 Photo: East Port JSC
In August, Russian President Vladimir Putin held the first meeting of the Commission for the Development of the Fuel and Energy Complex and Environmental Safety in the last two years. The main theme of the event was the coordination of the work of the "Russian Railways" (RZD), coal companies and stevedores. According to the president, the current conjuncture provides an opportunity to expand Russia's presence in the global coal market, strengthen its positions and increase its share. However, in order to realize this potential, it is necessary to solve a whole range of tasks, including - to improve logistics, expand export corridors, first of all, the capacity of the railways for which coal companies are anchor shippers.

Russian market participants have an opportunity to take advantage of the growing demand for coal from the Asia-Pacific countries, where the nearest years, according to experts, consumption will grow by 100 million tons annually. This is possible, the head of state noted, only at the expense of "constant liaison, docking plans of coal companies to increase production with programs for the development of Russian Railways, as well as investment projects for seaports." The growth of the "coal stream" through the Far Eastern ports puts another important task - concern for the environment. Vladimir Putin called on "to solve the problems of coal industry development on the basis of the most modern technologies": "to introduce more advanced standards of coal industry work, to pay more attention to environmental protection, especially in ports, coal transfer points". "The whole chain should be ecologically sound: from coal mining to its transshipment in seaports," the president emphasized.

Through JSC "East Port" coal exports more than 20 shippers. The entire volume is provided by the cargo base of Russian coal mined in the Kuzbass, Khakassia, Yakutia and other coal basins of Russia. In general, over the past year, the turnover of the ports of the Far East basin, according to the Association of Russian Sea Ports, amounted to 191,7 million tons. According to the head of the Ministry of Energy Alexander Novak, in the eastward direction Russia exports about 100 million tons of coal for this year. By 2025, these volumes will double, reaching 207 million tons. Of these, 195 million tons will need to be transported by rail.

One of the fastest growing stevedores in the Far East is East Port JSC. The company will hand over 2018 million tons of coal for 25 year, to 2024 year - it will overload up to 40 million tons. To do this, the investor is building the third stage of the coal complex. At the moment it is the largest private port investment project in the Far East. Stevedor implements it on the principles of public-private partnership - technical documentation is coordinated with RZD, construction financing is being provided by LLC "Managing Port Company" and JSC "Vostochny Port" without attraction of budgetary funds. The total investment is about 32 billion rubles, of which 4,7 billion rubles are investments in railway infrastructure facilities.

"Over the past five years, we, and other specialized ports, have added up both in terms of infrastructure construction and introduction of new technologies, which significantly increases the volume of transshipment." For the whole economy, this has a multiplier effect, because these investments enabled producers to extract more coal, JSC "RZhD" - noticeably increase the volume of transportation, the state - get more taxes, "- says the first deputy general director - commercial director of LLC" Managing Port Company "Irina Olkhovskaya. In 2017, the "Eastern Port" transferred taxes to budgets of different levels more than 2,5 billion rubles. According to the forecast for 2018, the volume of tax deductions will increase to 3,4 billion rubles, with the introduction of new capacities of the Third Stage - up to 6 billion rubles.

For the third stage of the coal complex, deep-sea berths and warehouses have already been built in the port, a closed unloading station for wagons is being prepared for launch, equipped with two tandem car dumpers. Now JSC "Vostochny Port" is building one of the most important objects of the Third stage - the railway park "Novy" with 12 railway tracks, capable of receiving trains up to 71 cars each. The whole complex of measures will increase the capacity of the Nakhodka station of the East Far East by 5 million tons, ensuring the growth of cargo turnover of the ports of the Wrangel Bay.

The most important aspect of the growth of coal transshipment is the preservation of the unique Far Eastern nature, ensuring the comfort of the population. The technologies of coal dust suppression over the past years have moved far ahead. In 2017, East Port signed a memorandum on the joint implementation of advanced technologies in the sphere of environmental safety with the Japanese corporation Marubeni Corporation. Now it is the only specialized coal port in the Primorye Territory that uses the best available technologies for the safe transshipment of coal. Vostochny Port JSC is the first coal port of the Far East that has received the certificate of compliance with the requirements of the international standard ISO 14001: 2015 "Environmental Management Systems".
Since 2018, the port holding company has been implementing a comprehensive environmental program for the transition to closed coal transfer technologies, which will be invested more than 1,4 billion rubles. The complex of environmental measures provides for the modernization and installation of additional high-tech equipment for dust collection and dust suppression, including the construction of wind-dust protection fences. Our own accredited laboratory conducts regular environmental monitoring of the state of atmospheric air, industrial waters, the water area of ​​the Wrangel Bay.

Experts note that the demand of consignors for capacity in the east direction in the coming years will only increase, therefore all stevedores are actively investing in the modernization of their infrastructure. According to the head of the laboratory of interdisciplinary research and partnership of the School of Economics and Management of the FEFU Mikhail Kholoshi, the demand for transportation in the eastern direction "is not just growing, but accelerating," and by 2025 year its annual level may exceed 300 million tons. At the same time, experts believe that the expansion of port facilities in the Far East is important for the Russian economy as a whole.