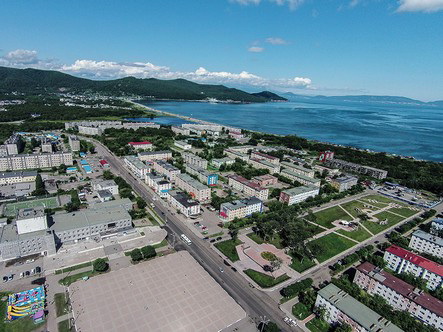 Special project TORA and Free Port
One of the important tools for the development of Kamchatka is the creation of territories of advanced socio-economic development (TOP).

"For our region, TOP is not a fashion trend, but a necessity. We must clearly understand how to develop the economy both in the region and in the Far East as a whole. Kamchatka has something to offer. First, these are our biological resources (fish, crabs, Secondly, this is tourism. By creating a priority development area, we must bring our tourism to a new quality level, so that this product would be in demand by different categories of the population. Well, and thirdly, the mining industry in Kamchatka also carries there is a huge potential in itself - investment projects for the development of the Ozernovsky and Amethystovy gold deposits, "says Yuri Zubar, deputy chairman of the Kamchatka Territory government for transport infrastructure.

Seaport and airport modernization projects are the most interesting and important for Kamchatka Krai. It is them that first of all need to be turned into modern growth points that meet international standards, as well as the goals and objectives of the region.


"Our region is open for investments. The primary task for us is to put in order the port facilities and the airport complex. Everything that concerns transport logistics in Kamchatka is important for us. The construction of a modern building of the sea terminal is underway in Petropavlovsk. Recently, the reconstruction of the airfield complex in the main airport of the region, and we plan to start construction of an air terminal already on the basis of a public-private partnership, "says the Governor of the Kamchatka Territory Vladimir Ilyukhin.

The first stage of the airport reconstruction, until 2018, involves the construction of a new international airport building with a capacity of at least 400 passengers per hour. In the long term, until 2035, it is planned to develop the entire air transport complex of Kamchatka, including the creation of the necessary amount of capacities for the accumulation, storage and transshipment of a sufficient amount of aviation kerosene that can satisfy the need for refueling transit aircraft.

As part of the modernization of the Petropavlovsk-Kamchatsky port, it is planned to increase its maximum cargo turnover to 8 million tons per year and to develop cruise tourism through the construction of appropriate berths, a sea terminal and other infrastructure.

“We are working towards making the sea trading port of Petropavlovsk-Kamchatsky the eastern pillar of the Northern Sea Route (Sevmorput). The port has an outlet to the Pacific Ocean: the bay is very convenient, large, deep-water, and provides a direct entry from the ocean, ”emphasizes Yuri Zubar.

The future of the fishing industry is also associated with the prospects of the Northern Sea Route in Kamchatka.

“Our Kamchatka fishermen give 24% of the total Russian catches: we catch almost a million tons of fish a year. And this is a quality product that can be on the tables of Russians. However, this path is not as easy as it seems: the fish needs to be caught, processed, but most importantly - delivered to the central regions of the country. And this is where the problems begin. Our task is to extract the volumes allocated by science, provide deep processing and deliver a quality product at a normal price. The transport problem in this entire process is the most difficult. The best option for us is to transport fish along the Northern Sea Route, deliver it to St. Petersburg, and from there - across Russia. Previously, we had difficulties in setting the price for escorting ships by the icebreaker fleet. Thanks to the position of the federal authorities, the problem was solved. But there are still many obstacles to the development of this logistics area. I hope that in the coming year we will be able to establish permanent direct supplies of Kamchatka fish to the European part of the country, ”says Vladimir Ilyukhin.

The tourist and recreational part of the TOP involves the creation of modern resort areas "Paratunka" and "Zelenovskie Ozerki" and other projects that will allow in the coming years to increase the tourist flow to the region up to 100 thousand people with the prospect of growth to 800 thousand tourists a year.

In addition, it is planned to create modern year-round greenhouse complexes and other agricultural enterprises at the Zelenovskie Ozerki and Nagorny sites.

“Kamchatka thermal tomatoes - they even smell like tomatoes, because they were picked just ripe from the garden. So far, the share of such producers in the region is small - conditions must be created for the agricultural producer and, most importantly, to reduce production costs. We are planning to build an agricultural farm for growing vegetables in Zelenovskie lakes. There will be about 8 hectares of greenhouse facilities here only at the first stage, ”says Yuriy Zubar.

13 anchor residents have confirmed their participation in various sites of the Kamchatka ASEZ. These are projects in various industries. For example, the construction of the Aqua Park on the basis of Lesnoy, recreational centers Tuluach, Zelenovskie Ozerki and Alye Parusa, the construction of a runway for small aircraft in the village of Nikolaevka, the construction of modern greenhouse complexes and other projects. The declared extra-budgetary investments for the first stage of the project amount to at least 28 billion rubles.

Several dozen new potential residents, including foreign ones, who are ready to participate in large investment projects, have applied to the government of the Kamchatka Territory.

“For us, the countries of the Asia-Pacific region are the most interesting partners, we are gradually starting to establish interaction with them, we have a positive experience,” says Vladimir Ilyukhin. - For our part, at the expense of budget funds, we plan to create a supporting infrastructure - only at the first stage - in the amount of 8,4 billion rubles. During the implementation of the project, more than 3000 new jobs will be created, and with the development of the entire planned territory - at least 8000. "

Thus, the Kamchatka ASEZ will ensure the creation of a tourist and recreational cluster, modern industrial and production complexes and, in the future, a transit container portahab for accumulating and sorting container consignments during transportation by the Northern Sea Route. The final socio-economic result of the project will be the creation of modern resorts and enterprises that meet international requirements with the attraction of foreign investment, and Russia's consolidation in the new growing Asian markets.

"TOP" Kamchatka "due to the unique features of the region has several sites. So far, this is the only priority development area in the Far East of this kind. We hope that the implementation of the projects will give a comprehensive development to the entire region, "says Marina Subbota, Deputy Chairman of the Kamchatka Territory Government for Economics.

At the Eastern Economic Forum in Vladivostokeregion, he will present projects included in the Kamchatka ASEZ, as well as projects for the development of pig breeding, the construction of a mining and metallurgical plant for the extraction and processing of ore from the Ozernovsky gold ore deposit, the creation of a tourist and recreational cluster, and the construction of a cascade of Zhupanovskie HPPs.

“The region is actively building modern mining and processing plants, developing new deposits. In the next 5 years, we hope to quadruple the volume of gold production, reach  tons of metal per year. These will be good indicators for us. However, it is very important to scrupulously approach these projects and preserve the pristine beauty for posterity, ”says Vladimir Ilyukhin.
Tags: Kamchatka TOP tourism investments economy
September 28: current information on coronavirus in the Far East
Digest of regional events and latest statistics
Media News2
See also: