Amur Region 11:44 Amur region strengthened its socio-economic position
Khabarovsk Krai 10:52 A plane from Khabarovsk changed course due to reports of mining
Amur Region 10:34 Chinese Heihe closes border with Amur Region due to coronavirus
Primorsky Krai 09:43 The number of budget places will increase in Primorsky universities
09:17 The share of LNG transportation on the Northern Sea Route will increase to 80%


Khabarovsk Krai 08:29 Quarantine posts will be placed in the Khabarovsk Territory due to coronavirus
Primorsky Krai 08:01 Pedestrian area along the Amur Bay equip in Vladivostok
07:23 Far East has become a leader in forest smuggling
Primorsky Krai 07:00 In Primorye, approved a plan for digitalization of the region
Trans-Baikal Territory 06:37 High alert mode introduced in Transbaikalia due to coronavirus

Honoka Sakhalin LLC, a resident of the Mountainous Air Forces development association, has been building copies of traditional Japanese baths since the summer of 2017. The agreement on the establishment of the enterprise was signed a year earlier at the Eastern Economic Forum in Vladivostok. Onsen is erected in a picturesque place, at the foot of the Bolshevik mountain, three minutes from the ski slopes of the sports and tourist complex "Mountain Air". Now in the balneological complex area of ​​4 thousand square meters. m. finishing works are in progress, all communications are brought, except for gas, they are waiting for the main pipe from Gazprom. 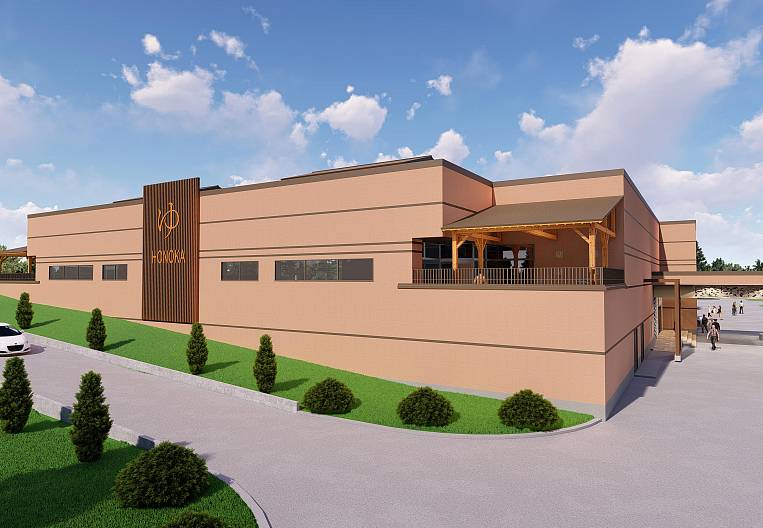 Photo: Photo courtesy of Honoka Sakhalin LLC
The core of the project is a deep well for the extraction of thermal water - now at the level of 740 m. The resident plans to drop even before 800 m. For comparison, the height of the Bolshevik mountain is 601 m.
“A thermal source is recognized if there is an excess in one of two indicators: temperature over 20 ° C or increased mineralization,” explains Sergey Dmitriev, General Director of Honoka Sakhalin LLC. - Now the temperature is 28 ° C, that is, we have already extracted thermal water. It will get geothermal status when it starts to self-infuse. And the exact chemical composition will be clear after the completion of drilling, cleaning, casing and examination of samples. Within a month we have to complete all this work.

“Honoka” is a well-known in the Asia-Pacific region balneological network with eight onsenes on the island of Hokkaido, three on Honshu and one in China. And in the first onsen on the Russian land, an authentic dress code will also work.

“This issue is now hotly discussed by Sakhalin residents,” says, smiling
Sergey Dmitriev. - The fact is that onsen is a traditional ritual with its own rules of behavior, just as there are rules for a Russian bath. In Japan, baths are always visited. Only in Sapporo their 300. We hope that Sakhalin residents will like this exotic procedure. A full-day ticket will cost about 900 rubles.

The complex will have six baths in each compartment, starting with a cool one near the salt sauna and a Finnish sauna and ending with an open-air bath outside, where the water temperature will be maintained up to 41 ° C.

“There will be a famous Japanese bath on stones, where the air temperature warms up to 55 ° C,” adds the project manager, “you lie and the heat slowly penetrates the body.” Guests of Honoka Sakhalin will be offered private VIP-rooms with onsen, cosmetic, hairdressing and massage services, as well as a visit to a restaurant for two thousand seats with an emphasis on Japanese and Korean cuisine.

The resident will give the island 60 permanent jobs. A third of the staff are cleaning specialists. Leading positions - bath manager and chef - will be occupied by the Japanese. The key Russian management before the opening will learn the culture of onsen in Japan, where he is as familiar as the bathhouse in Russia.