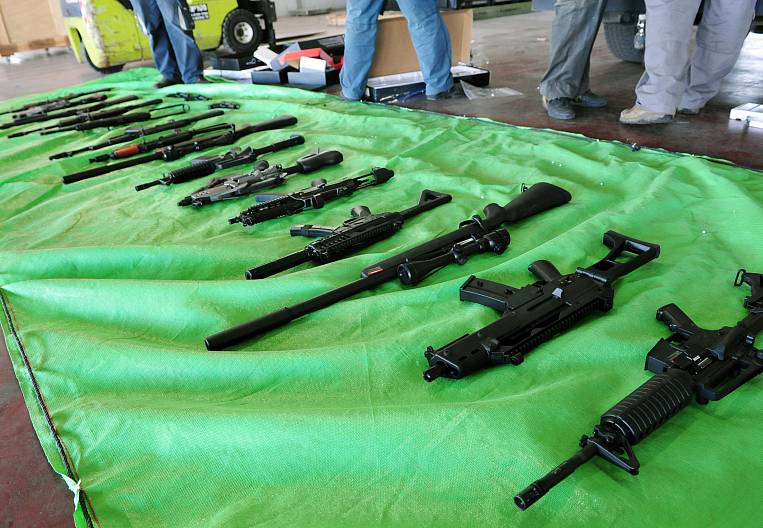 Let's pretend you are the supreme leader of a rogue country. And you are going to transport a couple of hundred tons of weapons left over from Soviet times across the border, but you are hindered by a severe embargo on the sale and purchase of weapons. You would like to quietly transport the weapon to its destination, but the main thing is to avoid detection. What is the Great Leader to do?

Thanks to the new UN report, there is no need to guess. This week, a group of eight experts concluded that, despite a nearly ten-year ban by the United Nations, the illicit arms trade from North Korea is flourishing and remains the most important source of income for a regime that is subject to numerous sanctions. The secret of success? A complex system of avoiding these sanctions, which is very clever use of foreign embassies, shell companies, ships under a foreign flag, secret holds and - of course - code words.

As the crew of the Chong Chon Gang found out from their own experience in July 2013, when the ship was detained carrying a large cache of Cuban weapons, this tactic does not always work. But even the best criminals fail to get out of the water all the time.

The UN report includes a detailed look at the arrest of the ship, which, according to a group of experts, allowed "for the first time to see the interconnected numerous deception techniques" used by North Korea. So, if you want to violate international sanctions on the arms trade and transport weapons around the world, here’s how to do it.

1. Create a wide network of front companies to own and manage your own illegal merchant fleet.

You will want to have a certain distance between you and the fleet, which deals with transportation of weapons, even if, like in the case of Chong Jong Gang, it carries a national flag. As the report says, "the maritime industry is characterized by a complex system of property and arrangements." This is something that you can use to your advantage.

A network of private shell companies that legally own or operate ships, according to experts, "will distract the investigation by the appearance of legitimate trade." And if the fact of illegal transportation of weapons becomes known, this approach can create several more advantages.

First, you, as the Great Leader, can always state that an exclusively private company is responsible for breaking the law. Secondly, if the assets of the company are confiscated or frozen, the financial effect of this can be somewhat smoothed by the fact that the rest of the trade, including larger deals, will occur more or less unhindered. When the detained ship is released, you can always rename it, post another flag and declare it the property of another, completely new company.

The UN report ascribes to the embassies of North Korea in Cuba and in Singapore the promotion of illegal trade transactions - remember, diplomatic immunity is your friend. The embassy in Singapore contributed to the company that owned the vessel "Chong Chong Gang". According to the UN at the same time, the North Korean Embassy in Cuba directly organized transportation.

3. Write code words (but do not write them down)

In the case of Chong Chong Gang, the captain had “secret” instructions for smuggling weapons, as well as special phrases that he had to use in relation to the goods. For example, he was ordered to call "containers" "mechanical parts" and to be on guard, since the phrase "The fee was set at 26 thousand" meant that he needed to make a false cargo declaration in Panama. On the contrary, the message "The fee was not set at the level of 26 thousand" meant that he did not need to declare the goods at all. Unfortunately, the captain wrote down all the instructions, which allowed the UN to obtain evidence.

The lesson is this: do not write down your secret codes.

Taking the example of "Chong Chong Gang", modify your ships so that inside the holds you can place containers with weapons. Illegal cargo must be placed on the bottom of the hold, covering it with some harmless commodity (for example, thousands of bags of sugar), completely closing it, and then adding one more layer of the goods (for example - even more sugar). Containers must also have fake walls and a bottom to add another level of security. Prepare false schemes of stowage of the goods and customs declarations that the deceit was a success.

5. Hide your location when you are on the high seas

If you want to avoid unwanted attention from unfriendly nations, turn off the automatic identification system of your ship and falsify entries in the logbook, so no one can track your location. But do not go too far. As the crew of the "Chong Chong Gang" learned on their own bitter experience, this tactic is guaranteed to create suspicion. Therefore, if your ship caused the attention of the authorities, do not ignore calls from nearby ports! Just show your fake documents and hope for the best.